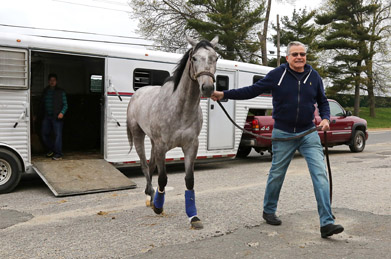 Oceanport, N.J. – As the clock hit exactly 6:45 a.m., the first van full of Thoroughbreds rolled through the Monmouth Park stable gate as the racetrack continues preparations for the 2017 season opener on Saturday, May 13.

The first to arrive this morning was trainer Chuck Spina, who oversaw eight runners ship in from Overbrook Farms in Colts Neck and another eight two hours later from Crupi’s New Castle Farm in Florida.

“It’s great to be home,” said Spina, an Oceanport resident who’s been coming to Monmouth Park since 1971.  “We’ve got a good mix of horses in the barn this year, including some promising 2-year-olds.  I always look forward to Monmouth, and this year is no exception.”

Among those in the Spina barn are Bustin Out, a 5-year-old mare, who capped her 2016 campaign with a win in the Eleven North Handicap here last August.  The dependable mare is 11 for 12 in the money at Monmouth with lifetime earnings just shy of a quarter-million dollars.

Joining Spina just after the stable gates swung open were conditioners Tim Kelly and John Mazza. The latter has been training horses at Monmouth Park for 60 years.

Once again the 2017 racing calendar will be highlighted by the $1 million betfair.com Haskell Invitational, set for Sunday, July 30.

Other highlights of this year’s racing season include four additional graded stakes on Haskell Day:  Molly Pitcher, Monmouth Cup, WinStar Matchmaker and Monmouth Stakes.  In addition, the Grade 1 United Nations Stakes will be renewed on July 1 with the Iselin Stakes for older horses going on Aug. 26.  The first graded stakes of the season is slated for May 27 with the Grade 3 Red Bank.