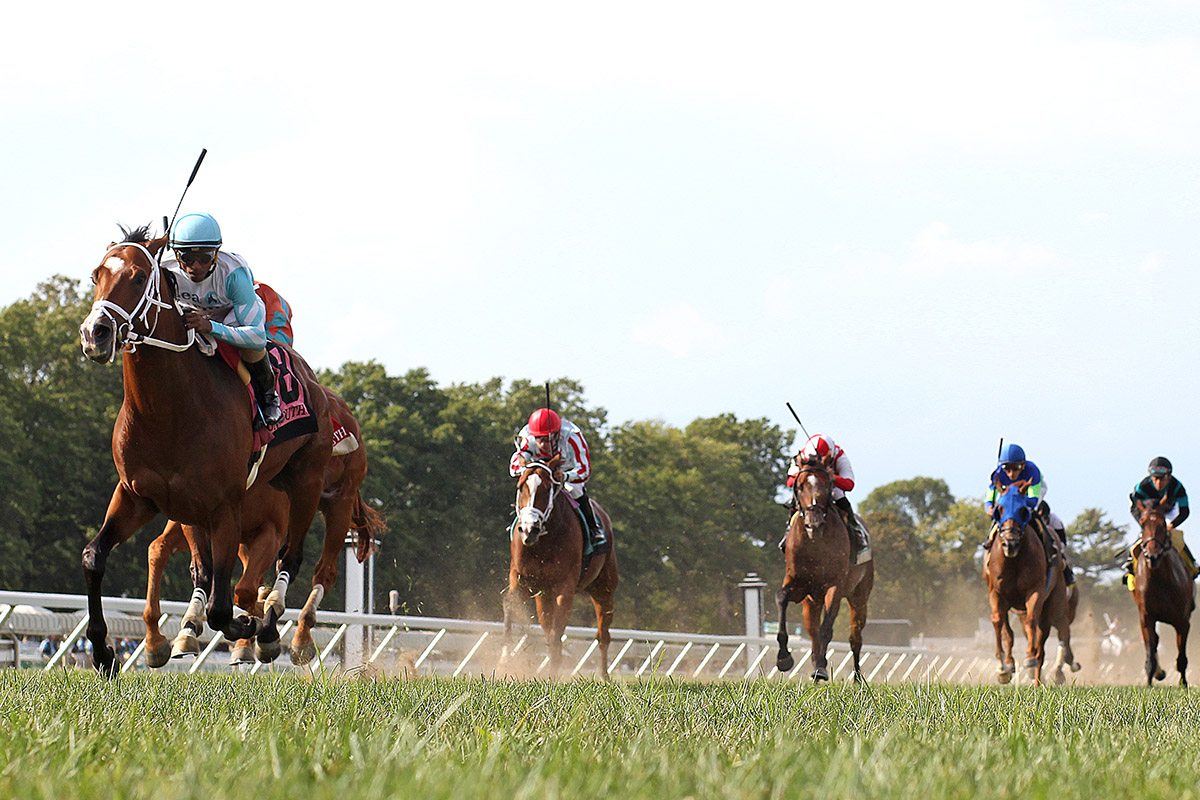 Trainer Jorge Delgado’s plan for Winfromwithin in Monday’s $102,000 Red Bank Stakes at Monmouth Park was simple enough. He wanted the horse on the lead and he didn’t care what it took for him to get there.

Not only did Winfromwithin make the lead from the break, he carried his speed throughout the one-mile turf feature to score a 1¼-length victory over longshot Nothing Better.

Delgado’s only anxious moments, in fact, were surviving a claim of foul and a stewards’ inquiry after Winfromwithin drifted over and crowded Nothing Better on the rail at the one-eighth pole. No action was taken.

“The way we do things and the way we run our program, we don’t change things if we have a strategy going into a race,” said Delgado, who recorded his first stakes win of the meet. “We live and die with our strategy. I’d rather finish last than change our strategy and today our strategy was for him to go to the lead no matter how hot the pace was.

“I wanted to be on a clear lead. That’s when he is at his best and it showed today. There was no other horse that was next to him so he was able to go by himself and find a rhythm. When he is alone like he was he gets brave.”

The winning time over a firm grass course was 1:34.59, with Winfromwithin carving out fractions of :23.11, :45.16 and 1:08.53 as he basically taunted his six rivals to come after him. Hot Blooded rallied for third, four lengths behind Nothing Better.

“My plan from the start was to go to the lead,” said winning jockey Carlos Rojas. “They told me that is when this horse is at his best. He was traveling comfortably the whole time. Even with the six furlongs going in 1:08.53 he was comfortable and doing it on his own. This is his game, being on the front and being the one everyone else is chasing.”

The 4-year-old Kentucky-bred son of Into Mischief, owned by Lea Farms, recorded his fifth win from 14 career starts. He was a tiring fourth in the Oceanport Stakes in his last start on Aug. 14 and missed by just a half-length in the Cliff Hanger Stakes on May 28. Both grass races were at Monmouth Park.

The win was his first in stakes company since capturing the Columbia Stakes at Tampa Downs on March 6, 2021. Todd Pletcher was his trainer then.

“The bar was high when I got him because Todd Pletcher had him before me and won a stakes with him,” said Delgado. “He had two good races in stakes company since I got him and the way he trains in the morning I always felt he would be a stakes winner for me.”

For the final two weekends of Monmouth Park’s meet – with live racing Saturday and Sunday only on both Sept. 10 and 11 and Sept. 17 and 18 – admission is free. Post time for the final four cards of the meet is 12:15 p.m.