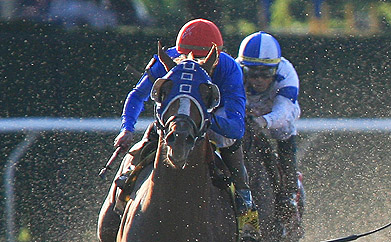 Watershed makes his first start back in graded stakes company since returning from Dubai in Saturday’s Grade 3, $100,000 Phillip H. Iselin Stakes going a mile and an eighth.

Watershed was last seen scoring a length victory in late-running fashion in a $62,000 allowance optional claiming event at Saratoga on July 25. It was just his second start since returning from at Meydan Racecoruse in Dubai.

“He’s a very nice horse and he has been doing great and training well,” said Kiaran McLaughlin, who conditions the horse for Godolphin Racing LLC. “He doesn’t break too sharp so we will most likely be sitting just off the pace.”

The 4-year-old Bernardini colt out of the Dubai Millennium mare Thousand Islands made two starts in Dubai, finishing third in the Group 3 Firebreak Stakes and a sixth place finish in the Group 1 Al Maktoum Challenge Round 3.

Watershed broke his maiden at first asking in a six furlong, maiden special weight event last August at Saratoga, where he showed that closing kick after trailing by eight lengths on the backstretch and going five wide on the turn to grab the four length win.

Watershed has worked twice at Saratoga, where he is based, since the win a month ago. The most recent came on Aug. 19 when he went four furlongs in :49 3/5.

Antonio Gallardo will get the mount for the first time aboard Watershed on Saturday.

Watershed isn’t the only one in the Iselin field that is coming off a victory in their last start. Cowboy Rhythm, for Todd Pletcher, took an allowance optional claiming win over a sloppy main track at Monmouth while David Jacobson trainee Baccelo is looking for his third straight win after taking back-to-back allowance optional claiming races, one each at Santa Anita and Saratoga.