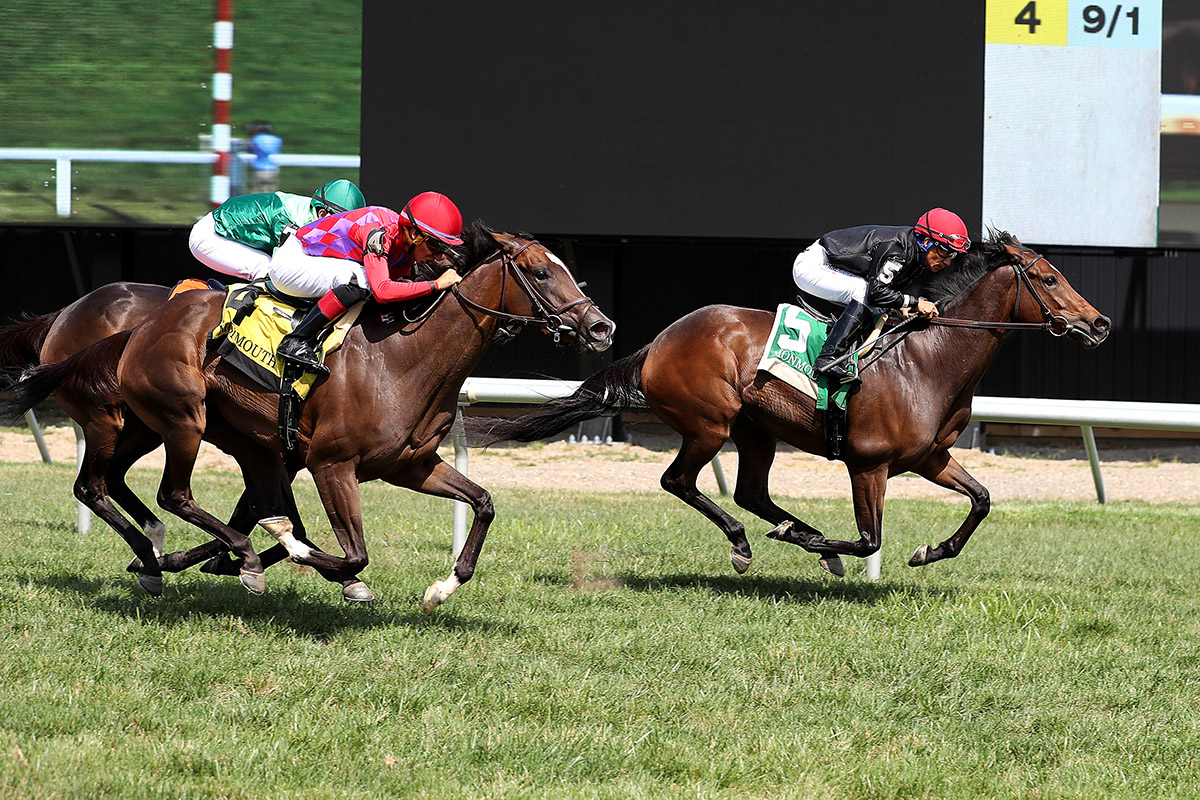 After three frustrating near-misses to start her 5-year-old campaign, Vigilantes Way was able to break through on Saturday at Monmouth Park in a performance that trainer Shug McGaughey said “was overdue for her.”

Taking advantage of a rail trip in the five-horse field of fillies and mares 3 and up, Vigilantes Way closed stoutly inside and was able to hold off the late-running Runaway Rumour for a half-length victory in the $100,000 Violet Stakes.

It marked the third career stakes win at Monmouth Park for the Kentucky-bred daughter of Medaglia-Salute by Unbridled and improved her record at the Jersey Shore track to 3-3-1 from seven starts there.

The winning time for the mile and a sixteenth over a firm turf course was 1:41.78.

“I’m glad to get it behind us,” said McGaughey. “All of her races at Monmouth Park have been good races. A couple of things got in the way to keep us from winning. I thought Paco Lopez rode her good today, even though he got in a little bit of jam. But he waited until something opened and when it opened he took advantage of it. I’d rather get beat on the rail than have to go wide. The rail helped us today.”

The Phipps homebred started her 2022 campaign with a second-place finish, beaten a neck, in the Miss Liberty Stakes, then was second in the Grade 3 Eatontown Stakes and then was third, beaten just three-quarters of a length, in the Grade 3 Matchmaker Stakes – all on the Monmouth Park turf course.

“She was close the last three times here,” said Lopez, well on his way to his ninth Monmouth Park riding title. “You knew she was ready for a win. It helped that it was a short (five-horse) field today. I wanted to be covered with her so I got to the rail as soon as I could and then I waited and waited. When it’s not that many horses you expect something to open up eventually and it did.

“She likes to be covered and then run late. I got lucky that there was room on the rail in the stretch and when I asked her she opened up.”

Sitting a stalking third, Vigilantes Way had the advantage of going inside while Runaway Rumour went four-wide coming out of the final turn. The Chad Brown-trained Flighty Lady was another neck back in third.

Vigilantes Way sat just off of fractions of :22.86, :46.94, 1:11.02 through six furlongs set by Mademoiselle Nova before that one faded and Flighty Lady took a slight lead at the sixteenth pole. Vigilantes Way came flying up the rail with Runaway Rumour taking the overland route, unable to get to the eventual winner.

Vigilantes Way paid $3.00 to win as the 1-2 favorite in posting her seventh win from 19 career starts. She has banked $497,014 for her career. She counts the 2021 Grade 3 Eatontown Stakes and the 2021 Miss Liberty Stakes among her other Monmouth Park Stakes wins.

“She’s a little machine,” said McGaughey. “She’s fun to train. She goes about her business every day. She’s like a robot. When you go to breeze her it’s the same thing. She’s easy to bring around. Not only has she made the Phipps a nice filly but she is going to make a great broodmare.”