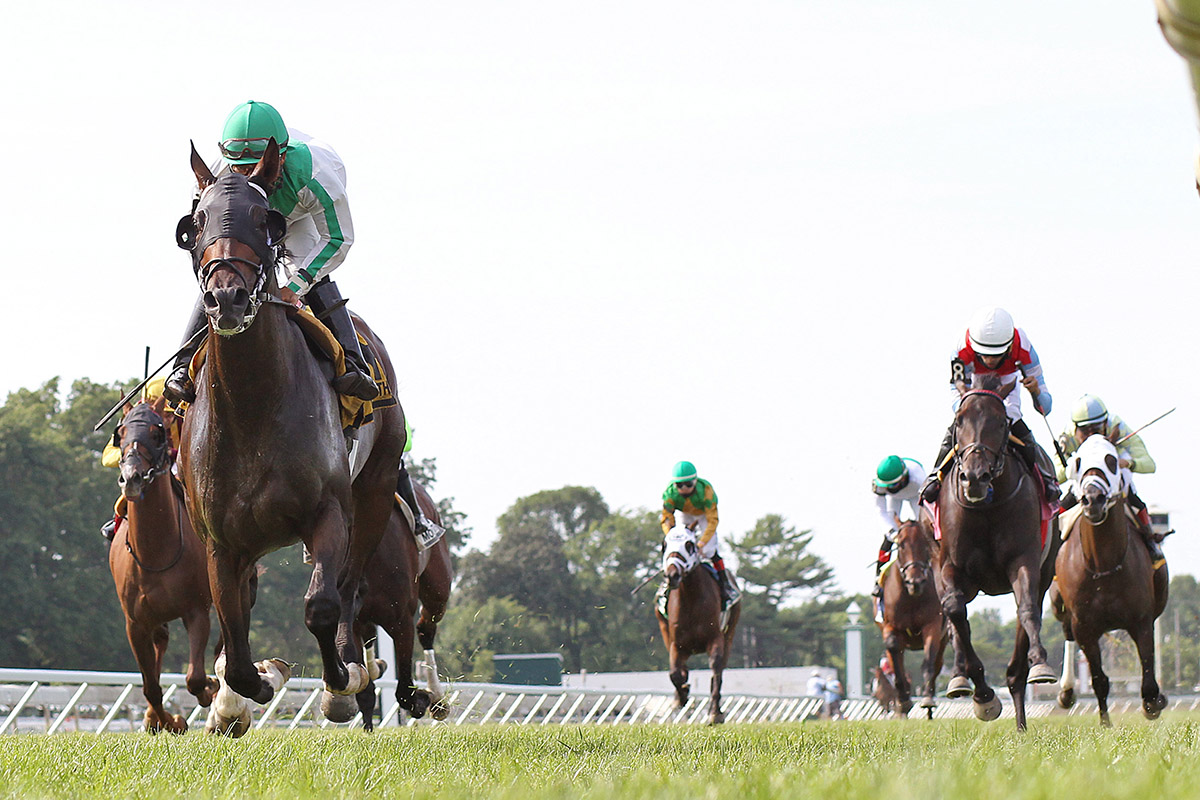 Trainer Michael Pino was pretty sure he had a stakes-caliber grass horse in Vanzzy. Now he’s certain of it.

Sitting an ideal trip behind dueling leaders, Vanzzy shot through an opening along the rail coming out of the final turn and powered his way to a 3½-length victory in Sunday’s $100,000 Jersey Derby at Monmouth Park.

After a fourth-place finish and then a third in graded stakes races this year in his first two grass tries, the 3-year-old son of Verrazano-Selva by Forest Wildcat had his turf breakthrough in the 77th edition of the Jersey Derby.

Paco Lopez, Monmouth Park’s runaway riding leader, rode the winner, who paid $7.20 in the field of seven. Time for the mile and a sixteenth over a turf course listed as firm was 1:42.30.

“A perfect trip. A great ride by Paco (Lopez),” said Pino. “This horse needs that kind of trip. He’s a little antsy early. I was real happy with the ride, real happy with the trip and he punched away like he’s getting better. This was his best race yet.

“You can see he is getting better with each race, especially when we can get him to settle like we did.”

Lopez, who said he had the option of taking the lead or settling in with the versatile Vanzzy opted for the latter. He was on the rail, alternating between third and fourth as longshots Island Commish and Bye Bye Melvin dueled through a half in :49.41 and reached the mile together in 1:36.46.

With three horses fanned across the track coming out of the final turn, Lopez found an opening along the rail and Vanzzy exploded through it. Bye Bye Melvin held for second, three-quarters of a length behind the late-running Iris Mias.

“I think you can say that was a perfect trip for this horse,” Lopez said. “Mike left it up to me, but he said this horse can be on the lead if you need him to be. The turf course isn’t really fast. It’s a little soft. I was just so comfortable with him being on the rail and following horses. I just had to wait for the chance to move.

“You have to make a split-second decision coming out of the turn. Sometimes the rail is open, sometimes it’s not. This time it was open for me so I took it. He really responded when he got through and was able to run.”

Pino said the Virginia Derby at Colonial Downs was the next possible destination for Vanzzy.

“We’ll play it by ear,” Pino said. “He has become a real solid horse.”