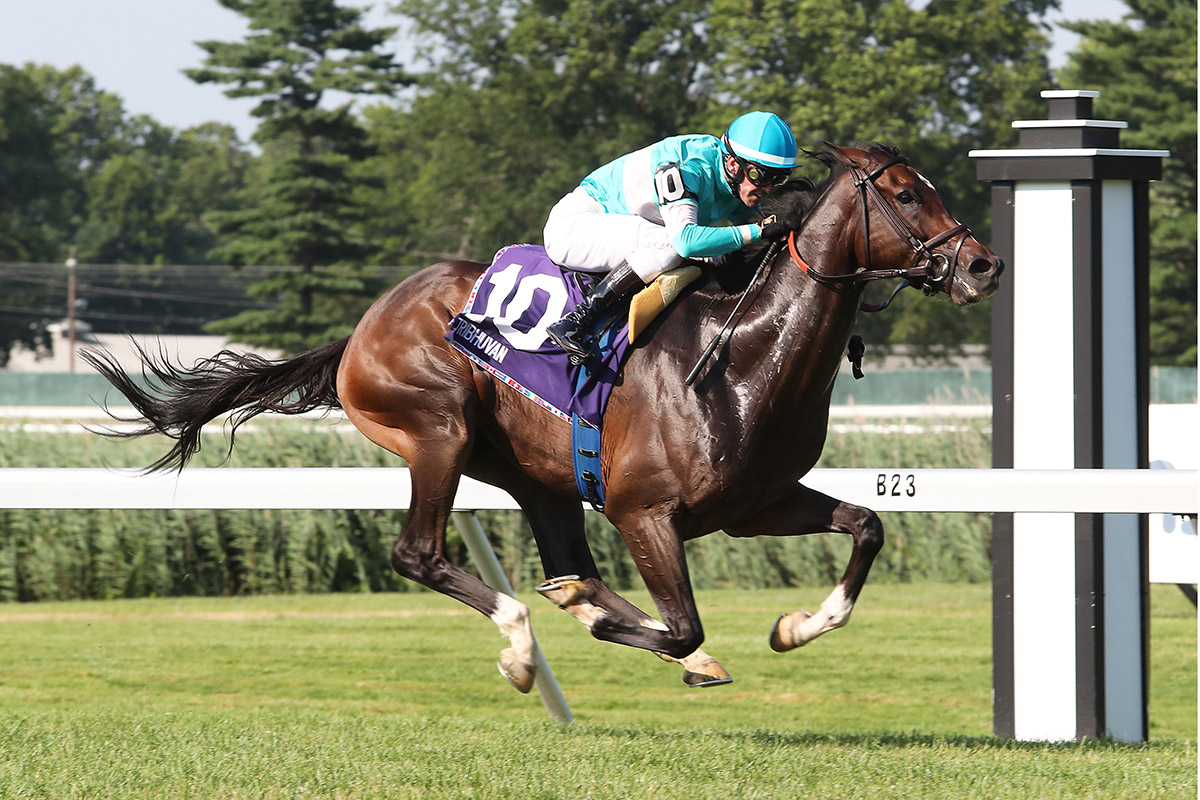 Tribhuvan, the runner-up last time out in the Grade 1 Manhattan Stakes to his near-flawless stablemate Domestic Spending, earned a top-level score of his own for trainer Chad Brown when he bested a field of nine turf horses in Saturday’s Grade 1, $500,000 United Nations Stakes at Monmouth Park.

The 68th running of the United Nations, contested at 1 3/8 miles, was one of six stakes on the day, which was highlighted by Mandaloun’s victory in the Grade 1, $1 million TVG.com Haskell Stakes.

Tribhuvan, overshadowed by Domestic Spending this season, turned in a breakout performance on Saturday. Ridden confidently by Flavien Prat, the 17-10 favorite took a commanding lead out of the gate and held his position as he was ridden out to the wire in 2:15.48 for a two-length victory on a firm turf course. A pair of long shots, 23-1 Imperador and 61-1 Epic Bromance, completed the trifecta.

“We had a good trip. He broke well and got me in the race,” said Prat. “Then I was surprised I was alone because I didn’t feel like I was going that fast, and he really came back to me nice along the backside, and I took a nice breather. It was a good breather.

“The race went really well when I asked him to make his move. I kind of sent him out there because I didn’t be too wide so I ended up on the lead. My only concern from that point was getting him back into a nice rhythm without losing too much energy so that’s what I did. It worked out well. I had a lot of horse under me and he was really traveling well.”

The French-bred, 5-year-old gelding and the winner of the Grade 2 Fort Marcy Stakes in May, was making his sixth American start since being sent to Brown by owners Michael Dubb, Madaket Stables and Wonder Stables after his 2019 campaign in France.

“The way he ran (on the front end from start to finish) was the strategy,” said assistant Luis Cabrerra, who oversees Brown’s division at Monmouth Park. “That’s the way he ran in the (Grade 1) Manhattan in last start. He was just second-best to Domestic Spending. So we wanted to do the same thing this race.

“This horse has been training well. We’ve had him for a week at Monmouth Park and he has really taken to this place. I wasn’t worried about them catching him because these fractions weren’t all that fast. In the Manhattan he went 22-and-change and then 46.4 to the half. That was much faster and he still held strong for second. When I saw the fractions today I knew we were okay.”

Tribhuvan paid $5.40 to win and gave Brown his fourth victory in the United Nations.

In other stakes action on the Haskell undercard:

Dr Post, who finished third in the Grade 1 TVG.com Haskell Stakes a year ago, made a successful return to Monmouth Park by capturing the 43rd running of the Grade 3, $300,000 Monmouth Cup under Joel Rosario.

Bank It was third, another 1¾ lengths back.

The victory was the second in three 2021 starts this year for the colt, who was dropping down in class from a fifth-place finish in the Grade 1 Met Mile last time out and was wearing blinkers for the first time.

“This is a horse we’ve always felt highly about,” said trainer Todd Pletcher. “He had kind of tricky race in the Haskell last year, but we felt like we know him well enough to show us he’d handle the track. We’d been contemplating putting blinkers on him for a little while.

Whisper Hill Farm’s homebred Graceful Princess became a first-time stakes winner when the 5-year-old mare staged a 14-1 upset in the 75th running of the $250,000, Grade 3 Molly Pitcher Stakes for fillies and mares three and older.

Ridden by Joel Rosario, who swept all three Grade 3 races on the undercard, and trained by Todd Pletcher, the regally-bred daughter of Tapit out of 2011 Horse of the Year Havre de Grace came from off the pace and rolled to a three-quarters lengths victory in 1:47.67 for the 1 1/16 miles over a fast track. Bajan finished second, one-half length in front of Our Super Freak.

“She’s had a couple of poor performances on off tracks, so we weren’t sure (about her), other than she came back and trained well,” Pletcher said. “She’s always been a filly who trained like she was capable of doing something like this, so it’s great to see her put it all together. She’s arguably one of the best-bred fillies on the planet so for her to win a race like this is huge.”

Trained by four-time Eclipse Award winner Chad Brown, the daughter of Scat Daddy closed strongly through the lane ran down even-money favorite Juliette Foxtrot in deep stretch to prevail in 1:48.89 on firm turf. Her stablemate, Kalifornia Queen, was one-half length back while Juliette Foxtrot, a Juddmonte Farm homebred Grade 1 winner, held on for third and was half-length behind.

Monster Racing Stables The Critical Way turned in another monster effort in the $100,000 Wolf Hill Stakes, covering the about 5½ furlongs on the firm turf in 1:01.11 under Paco Lopez to finish three-quarters of a length in front of The Connector while Cajun Cassanova was third.

Dispatched at 1-9 in the six-horse field, the Pennsylvania-bred son of Tizway paid $2.20 for a $2 wager.

The win was the second straight Monmouth Park stakes victory and fourth overall for the 7-year-old gelding and trainer Jose Delgado said it kept his charge on track for the Breeders’ Cup Turf Sprint in the fall.