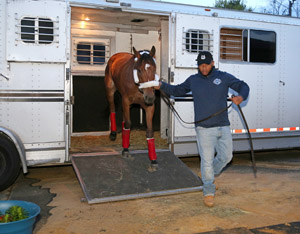 Tony Wilson said he wasn’t necessarily trying to be the first one on line with a trio of horses he shipped up from Florida when the Monmouth Park stable gate opened for the season at 6 a.m. on Friday. But the veteran trainer sees it as a good sign for the 61-day meet that gets underway on Saturday, May 4 – Kentucky Derby Day.

“We’re really looking forward to this meet,” Wilson said from Tampa Bay Downs, where he will remain until heading to New Jersey on Monday. “Hopefully it’s a good sign that we were the first to get there.”

Russian Roulette, a 3-year-old filly that Wilson has high hopes for, was the first horse to step foot on the grounds as Monmouth Park gears up for its 74th year of racing. The Grade 1 TVG.com Haskell Invitational on Saturday, July 20, will again headline a season that will feature 64 stakes races (12 of them graded) worth $7.1 million.

Purses are expected to average approximately $500,000 daily. All stakes races will carry a minimum purse of $75,000.

“There are a lot of positive things happening at Monmouth Park this year,” said trainer Chuck Spina, whose trailer was right behind Wilson’s when the stable gate swung open early this morning. “I’ve been training here since 1971 and this is the time of year I always look forward to. With the purses and stakes schedule what they are this year it’s exciting for everyone.”

The 17th annual New Jersey Thoroughbred Festival, with three stakes races, will be renewed on Aug. 25.