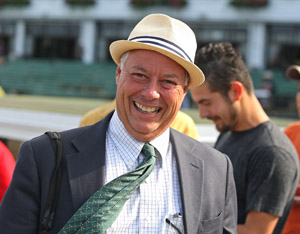 Trainer Patrick McBurney expects to find out a lot more about two horses he has high hopes for this year when he sends out both in separate stakes races at Monmouth Park on Sunday.

Liz’s Cable Girl, off since a seven-length romp at Parx on Dec. 17, will make her 2018 debut in the $75,000 Regret Stakes at six furlongs for fillies and mares 3-years-old-and-up. Two races later, in the $60,000 Dan Horn Handicap at a mile and a sixteenth on the grass for Jersey-breds, Golden Brown will make his first career turf start.

“You have to be realistic. They’re both in tough spots,” said McBurney. “If Liz’s Cable Girl could run third or fourth and not be beaten too badly I’d be happy with that. We were trying to find a prep race for her before this but nothing worked out. It’s a pretty tough spot for her first race back.”

A winner of 6-of-9 career starts, and 3-for-4 at Monmouth Park, Liz’s Cable Girl turned in a bullet work of :47.1 handily from the gate on June 8 as her final preparation for the Regret Stakes, which has drawn a field of eight.

That fast morning showing aside, McBurney has been working with the speedy 4-year-old daughter of Cable Boy-Forbidden Isle to relax more.

“Most of last year, because she’s a fast horse, she could just run horses off their feet,” McBurney said. “Then when she got into some tougher races a couple of the fillies looked her in the eye for the first three-eighths or half-mile and she wasn’t up to it. We’ve been working with her in the morning to get her to sit behind horses to see if she will relax.

“I really want her to adapt and listen to the jockey more. Hopefully, she won’t be too fresh and we can get her to do that in this race.”

Golden Brown, fresh off a neck victory in a state-bred allowance at Monmouth Park on May 26, will be trying two new variables in the Dan Horn: Turf and a race beyond 6½ furlongs for the first time in his career. The 3-year-old son of Offlee Wild-Suzee Sunrise has two wins and two seconds from five lifetime starts.

“This is a tall order for him, but being a Jersey-bred we thought we’d give it a try,” said McBurney, who has five wins so far at the Monmouth Park meeting. “He has a nice turf pedigree and it’s his first time stretching out, so we’ll see. Hopefully, he relaxes. He gets a weight break because he’s only three and he’s going against older horses. We’ll see how he handles all of it.”

Regardless of how the Dan Horn turns out, McBurney expects Golden Brown – who already has two wins and a second this year – to have a solid 2018.

“He should have a good 3-year-old year,” said McBurney. “He does have a ton of pedigree. If he can listen to the jockey for the first three-eighths or half-mile of this race and maybe get second or third and make some kind of run, I’d be happy.”