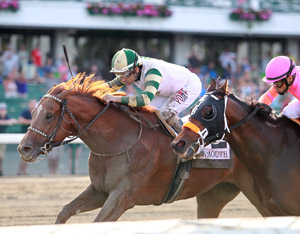 Trainer Michael Stidham doesn’t mince any words when it comes to what he’s expecting from Supreme Aura in Saturday’s $100,000 betfair.com Long Branch Stakes at Monmouth Park.

Not only does he anticipate a win, he wants to it to be accomplished in style.

Supreme Aura, being wheeled back three weeks after his neck victory in the Pegasus Stakes, heads a field of five 3-year-olds in the mile and a sixteenth feature race on the 11-race program. It’s a make-or-break test for the son of Candy Ride-Groton Circle if the betfair.com Haskell Invitational on July 29 is in his future.

“To even consider the Haskell for him, with or without Justify, he’s going to have to show another dimension in this race,” said Stidham. “He’s not going to be able to get away with what he did in the Pegasus and be a contender in the Haskell.”

Placed on the early Triple Crown trail in February at Fair Grounds, Supreme Aura “wasn’t quite ready for what we were asking him to do then,” according to Stidham.

But the colt has gradually started to live up to the promise Stidham saw in him, rallying late to win the Pegasus at Monmouth Park on June 17 by a neck over Roaming Union. Stidham liked the late determination by his horse but wasn’t overly impressed with the total performance.

“He looked like he was hopelessly beaten at the eighth pole in that race. It didn’t look like he had any chance. The fact that he did get it done is a credit to him but they also went pretty slow that last quarter of a mile. He’s going to have to not be life and death to get by a horse going the last quarter that slow. So he’s got to do it with a little more authority than he did in the Pegasus.”

Owned by Stallionaire Enterprises, Supreme Aura is 3-for-6 lifetime with two thirds. His only off-the-board finish was in the Grade 2 Risen Star on Feb. 17 at Fair Grounds.

“Without a doubt he has matured since the winter,” Stidham said.

The veteran trainer says he has no hesitation in bringing Supreme Aura back for another stakes race just three weeks after his last one – and won’t again if the horse shows enough to be considered for the Haskell in 22 days after this race.

“Every race we see how he comes out of it, if he’s doing well and training well and handling the race well,” said Stidham. “Then we look to the next opportunity. He came out of the Pegasus in good shape and was ready to go again. He had a good work the other day over the track so there’s no reason not to be running him back right now. We won’t think about the next race until we get through this one.”

For the Saturday card there is also a carryover of $93,314 in the Jersey Shore Pick 6, a 20-cent wager that covers the final six races.