Trainer Michael Pino Looking For Big Effort From Vanzzy In Sunday’s $100,000 Jersey Derby On The Grass 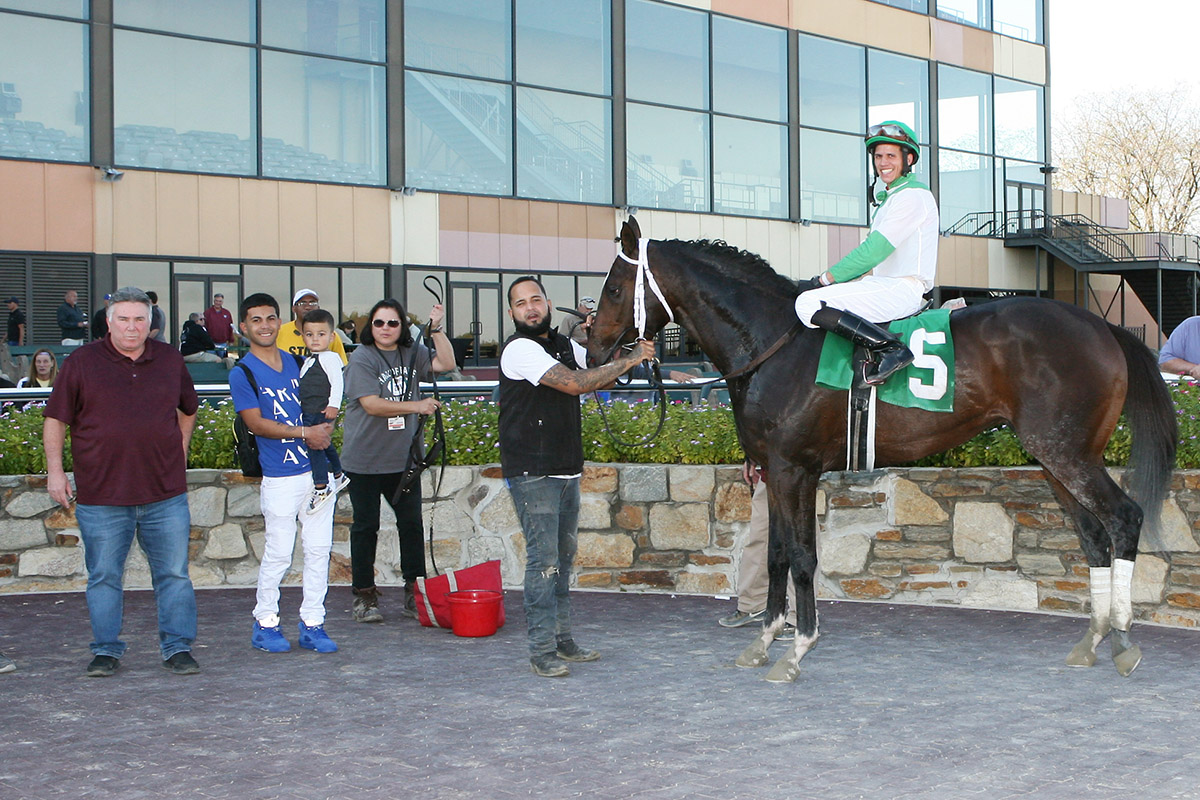 After seeing Vanzzy turn in two good but not-quite-good-enough efforts on the grass against graded stakes company this year, trainer Michael Pino is convinced his talented 3-year-old colt has a future on the turf.

The next step, he hopes, is Sunday’s 77th Jersey Derby at Monmouth Park at a mile and sixteenth on the grass. The $100,000 stakes race headlines a 12-race program.

“He likes the poly and he has pedigree for the grass. That’s why I decided to try him on the grass this year,” said Pino. “It was something I always wanted to try with this horse. He’s a solid horse. There’s some good horses in this race. But I feel like he has a good chance.”

A son of Verrazano-Selva by Forest Wildcat, Vanzzy will face seven other 3-year-olds in the Jersey Derby. For a change, Pino wouldn’t mind seeing two things happen: More consistency from his colt after a roller-coaster eight-race career to this point and no potential superstar competitor in the field.

In his racing debut at Parx on Sept. 21, Ny Traffic was among the horses Vanzzy ran into during a fifth-place finish. In his first stakes try, Vanzzy was second to Mischevious Alex in the Park Juvenile. Pino’s charge ended a solid 2-year-old campaign by winning the Display Stakes at Woodbine.

“I always like the way he trained at 2,” Pino said. “It looked like he would get better as he went along and gained experience.”

The colt’s first start at 3 was in the Grade 3 Withers at Aqueduct, but Vanzzy was pulled up in the race.

“I took a shot,” said Pino. “I don’t know what happened that day. I really don’t know. He had me worried that something was wrong. I just threw out that race and moved on with him.”

Vanzzy, who sports a 3-1-1 line from his eight career starts, rebounded by winning the Rushaway Stakes at Turfway Park on March 14 before Pino tried him on the grass following a three-month layoff. He was fourth in Grade 2 Pennine Ridge at Belmont on June 20 then third in the Grade 3 Kent, also on the grass, at Delaware on July 4.

“The Kent was one of his better races,” said Pino, who is approaching1,900 career wins and $40 million in earnings over a career that began in 1983. “He had to chase the speed and made the lead but two good horses (Gufo and Pixelate) went by him. I could say maybe it was the mile and an eighth but he was actually still running well. Those two horses that beat him are good horses.

“I know I’m not picking the easiest spots for him but he doesn’t have a lot of conditions. So you kind of go with what’s out there.”

In the Jersey Derby, Vanzzy will tackle a pair of horses (Irish Mias and Bye Bye Melvin) from trainer H. Graham Motion’s stable, as well as the Saffie Joseph, Jr.-trained Island Commish and Dante’s Fire, who is trained by Mike Maker. But Vanzzy is two-for-two at the Jersey Derby distance.

“He’s doing good right now and his two turf tries were encouraging so we’re just going to go with it,” said Pino.