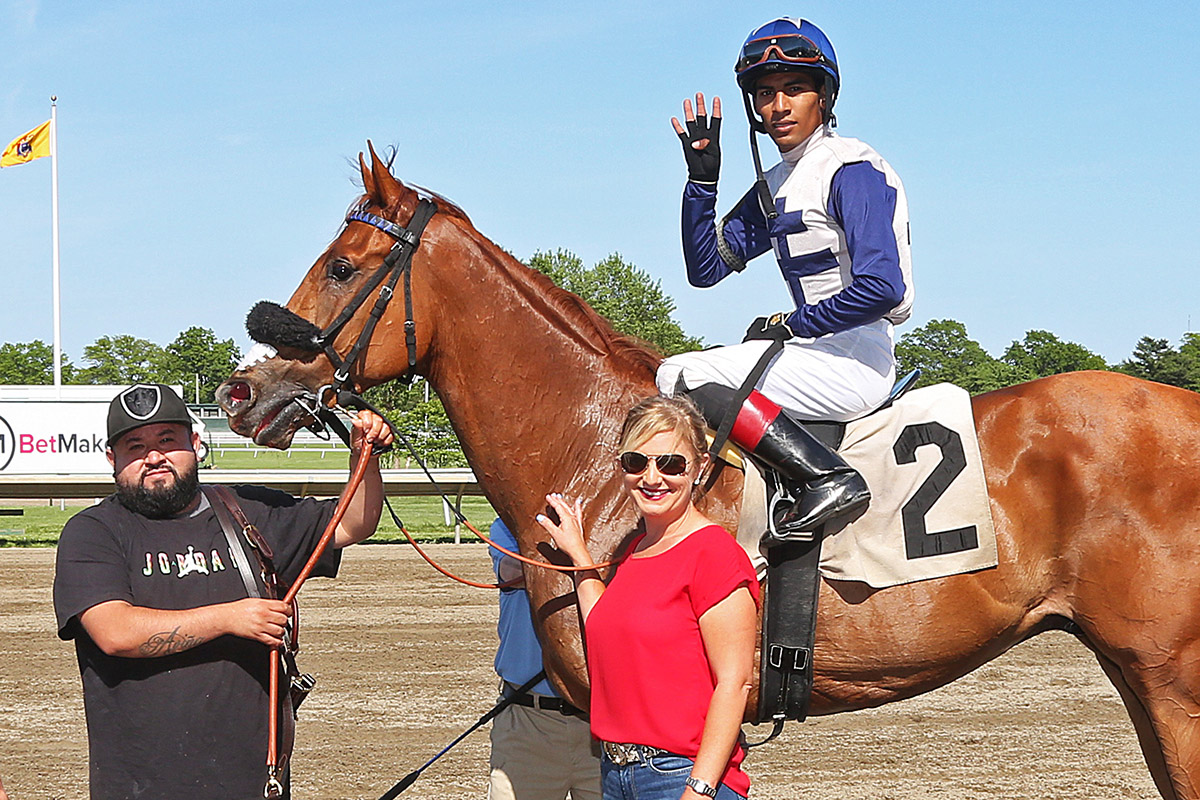 Trainer Michelle Hemingway is hoping the third time truly is a charm when it comes to her latest foray into a stakes race.

In the midst of her first year as a trainer, and her first summer stabled at Monmouth Park, the 38-year-old Hemingway will send out Wholebodemeister in Saturday’s $100,000 Lady’s Secret Stakes at the Jersey Shore track.

Manor House, the first horse she started in a stakes – the Discovery Stakes on Oct. 27 at Aqueduct, one of only three starters she had last year – “grabbed a quarter” in the race. Wholebodemeister was then set to go in in the Serena’s Song Stakes on May 8 at Monmouth Park but flipped in the gate and was scratched.

“Luckily, for as scary of a situation as it was, she has come out of it no worse for the wear,” said Hemingway. “If anything I think she’s better.”

Wholebodemeister, a Kentucky-bred daughter of Bodemeister-Wholelottashakin by Scat Daddy, has to overcome two obstacles if she is to give Hemingway her first career stakes winner. She has been idle since her seasonal debut on March 12 at Tampa Downs because of that gate scratch and has never tried two turns. The Lady’s Secret Stakes is at a mile and a sixteenth for fillies and mares, 3 and up.

“I’m not really concerned about it,” said Hemingway. “The way she trains and the way she does things she is just a very professional filly when it comes to running. She is very competitive but she is also ratable, so I don’t have any concerns with two turns.”

Wholebodemeister, owned by Holly Hill Stables LLC, enters Saturday with a victory in the Grade 2 Davona Dale at Gulfstream Park in her last start as a 3-year-old last Feb. 27. She was trained by Juan Avila then.

Hemingway, a third generation trainer who took out her license last fall, had a win and a second from her three starters last year, posting her first career victory on Oct. 16.

She has her sights set on a stakes win as her next goal.

“I think there would be no words (when she wins her first stakes race),” Hemingway said. “I think if I have that first stakes winner … I tend to get slightly emotional. The tears would be coming.”

Hemingway, who has four wins from 29 starters this year – two victories from four Monmouth Park starters – has 30 horses stabled at Monmouth Park and another 31 at Thorostock Farm in Ocala, Fla.

Her father was a trainer who spent time on the New Jersey circuit at now defunct Atlantic City Racetrack and Garden State Park.

“My dad raced at Atlantic City all of my summers as a child, so I spent a lot of time there growing up,” she said.

A native of Virginia, Hemingway is a graduate of Sweet Briar College in Virginia, where she received a degree in International Equine Business and Marketing while participating on the riding team all four years.

“My dad said `you can train race horses but you have to go to college first,’ ” she said.

Hemingway then spent parts of seven years as an assistant in South Africa to notable trainers Joey Ramsden, Glen Kotzen and Mike DeKock.

“I wanted to go somewhere my dad had not trained,” she said. “An opportunity opened up in South Africa. It was a great experience.”

Now Hemingway is hoping Wholebodemeister will provide another great experience.

She made her seasonal debut at Tampa Downs following a 13-month layoff, finishing a close third in a handicap race.

“I was really happy with that,” Hemingway said. “I knew we were about a race short. But the race came up and I wanted to get one in her to prepare for the Serena’s Song Stakes and the Lady’s Secret Stakes. She ran a very credible first race back. I was very pleased.”

Jorge Vargas Jr. has the mount aboard Wholebodemeister, who has three wins in eight career starts.