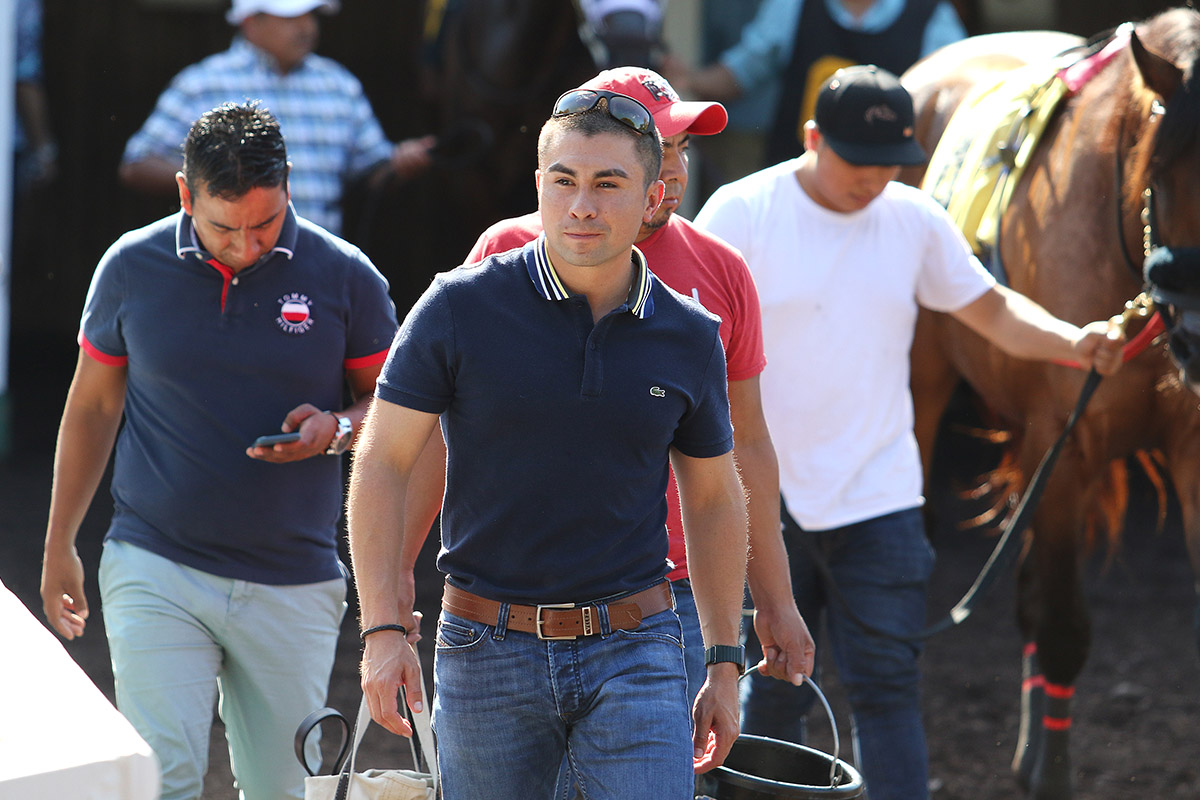 Trainer Jorge Duarte, Jr. isn’t ruling anything out if Big City Bob turns in a winning performance in Saturday’s TVG.com Pegasus Stakes at Monmouth Park. But the 20 Kentucky Derby points that go to the winner of the race aren’t nearly as significant as getting his colt’s 3-year-old campaign jumpstarted.

At least that’s how he feels now.

“I know he got a couple of points (two) for finishing third in the (Grade 1) Champagne Stakes last year,” Duarte said. “I don’t know what it would mean if he were to win this race. You have to see how he’s doing, how he comes out of the race. Everybody would love to have a slot in the Kentucky Derby. You have to see what happens.

“The main thing is we wanted to get his 3-year-old campaign started and this race came up. Timing-wise it was a perfect fit.”

The $150,000 TVG.com Pegasus Stakes, which drew a field of eight 3-year-olds, is the final opportunity to earn points for the starting gate for the Sept. 5 Kentucky Derby in three weeks. The mile and a sixteenth race headlines a 12-race card.

Duarte, saying he is “feeling better” after dealing with a case of the coronavirus and a bout with pneumonia the past six months, is looking to continue a successful meet this weekend after clicking with six of his first 16 starters at Monmouth Park. He will also saddle Miss Auramet in Sunday’s Incredible Revenge Stakes, which is scheduled for 5½ furlongs on the turf.

For now, though, his focus is on the Colts Neck Stables-owned Big City Bob, a Kentucky-bred son of Shanghai Bobby-Southern Accents by Birdstone who showed so much promise at 2, including a victory in the Sapling Stakes at Monmouth Park.

After winning two of his first three starts, Big City Bob was third in the Champagne Stakes at Belmont Park last Oct. 5.

“We decided to give him some time off after that and when we brought him back he had a little foot issue. So it has really taken time to get him back to 100 percent,” said Duarte.

In his seasonal debut on March 14 at Laurel in the Private Terms Stakes, Big City Bob was an uninspiring fifth in the six-horse field.

“You could see he wasn’t quite himself that race,” said Duarte. “Later we found a little abscess that came out. He’s training really well right now. And he loves Monmouth. He’s 2-for-2 there. So we’ll see what happens.

“We’re happy just to get him going again. Even in June when we were (racing) at Belmont he wasn’t quite ready. But now he looks good and he’s acting good. I’m kind of curious to see if he takes that step forward. He needs to step up to compete in this race.”

Miss Auramet, who came to Duarte two starts ago from Eddie Plesa’s barn, comes off a narrow loss in an optional $50,000 claimer at Delaware Park, where she was beaten by a neck in the final jump after leading the whole way.

The Incredible Revenge Stakes drew a field of 10 as well as three also eligibles.

In her first start for Duarte in the License Fee Stakes on Belmont Park on July 3, the usually-consistent Miss Auramet faded to eighth on a turf course listed as “good.” The 4-year-old daughter of Uncaptured-Hello Rosie by Yes It’s True sports a 4-4-2 line from 13 career starts and has shown she can sprint on the turf or an off track.

She has three wins, two seconds and two thirds from nine career grass starts and a win and a second over wet tracks.

“She has done everything right,” Duarte said. “She just has not been very lucky with the two races we’ve had her for. In the Belmont race it poured about 30 minutes before post time. She didn’t like the soft turf. She prefers firm turf. When she ran at Delaware that race came off the grass.

“We’re hoping to get a weather break for her on Sunday.”