Trainer Derek Ryan Hoping Vital Gets Another Grass Shot In Saturday’s $60,000 Tale Of The Cat Stakes 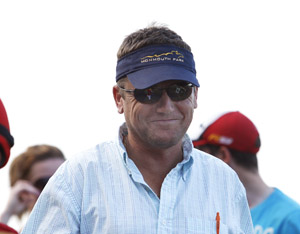 With a barn full of turf runners and little cooperation from Mother Nature since the Monmouth Park meeting started nearly three weeks ago, trainer Derek Ryan admits he’s getting frustrated.

At least for Saturday’s featured $60,000 Tale of the Cat Stakes, which is scheduled for a mile and a sixteenth on the grass, he can go to Plan B if he has to. Vital, though a lightly-raced 3-year-old, has shown he can handle the turf or an off track.

“In the 20-plus years I’ve been coming to Monmouth Park this is the worst spring weather-wise that I’ve seen here,” said Ryan. “The rain has just been non-stop.”

With 22 horses stabled at Monmouth and 17 of them confirmed grass runners (the other five have yet to start) Ryan has felt the effects of the poor weather and switches to the main track more than most conditioners.

He said it’s the primary reason behind his 0-for-6 start at the meeting.

Vital, a horse Ryan inherited from Wesley Ward, has a win and two seconds in three starts since coming under the 51-year-old conditioner’s care. The son of Shanghai Bobby-Sydney’s Kiss broke his maiden at a mile on the grass in a Maiden Special Weight race at Tampa Bay Downs on March 9, then was second in a $75,000 optional claimer at a mile and 40 yards in a race taken off the turf on April 11 at Tampa.

Ward had the horse for his first two career starts as a 2-year-old.

“I’d like this race to stay on the turf, but he has shown us he can run on dirt too,” said Ryan.

The Tale of the Cat Stakes, restricted to 3-year-olds, has drawn a field of nine and headlines a 12-race card on Saturday. The Todd Pletcher-trained Hazit, trying turf for the first time, looks to be a major threat in the race, as does the Graham Motion-trained Strike Me Down.