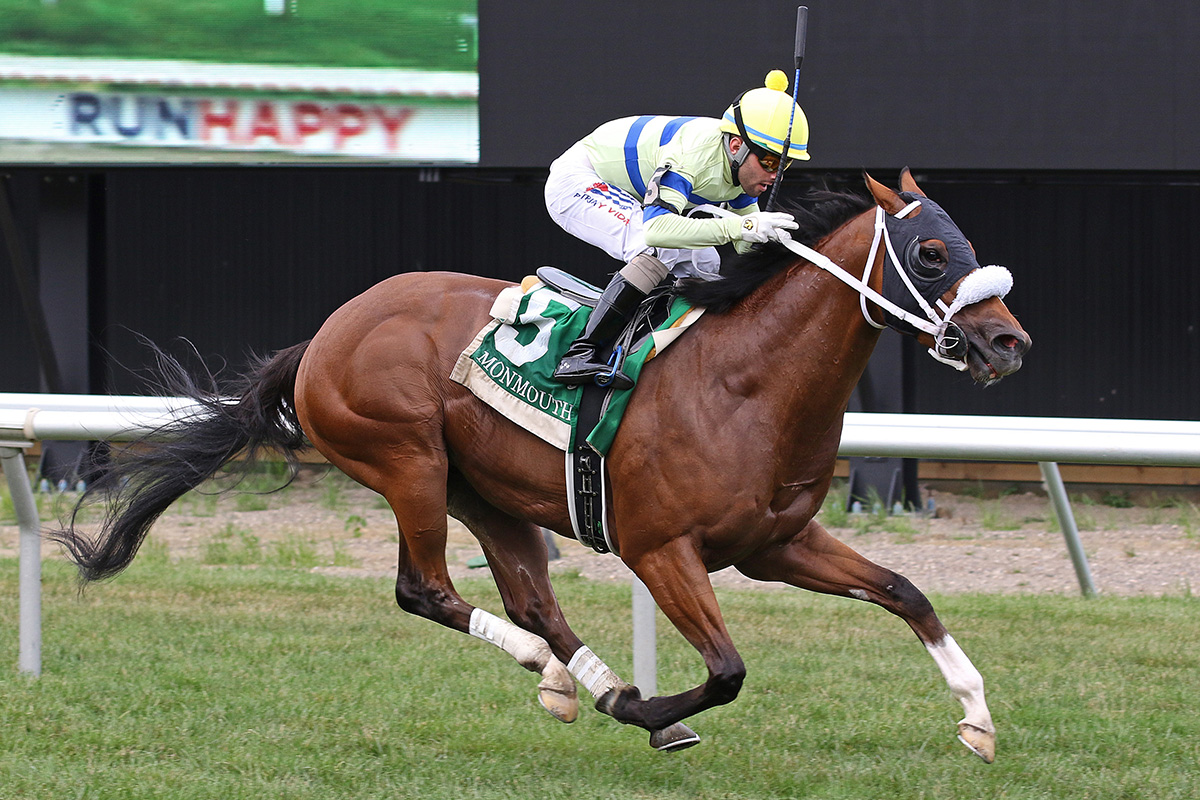 Jockey Andy Hernandez says there’s no secret to the success That’s Right has had since being switch to the grass three starts ago.

“With him, it’s ring and go,” said Hernandez. “If you want to catch me, okay. Good luck with how fast this horse is on the grass.”

That’s Right made the transition to stakes company look almost as effortless as he did the rise from the Maiden Special Weight ranks to an allowance, out-breaking the field by two lengths and then scampering off unchallenged for 3¼-length victory in Sunday’s $100,000 My Frenchman Stakes at Monmouth Park.

After starting his career 0-for-6 on the dirt, trainer Michael Moore tried the son of Goldencents sprinting on the grass for the first time on May 20 at Pimlico. He won that race by five lengths to break his maiden, then easily handled allowance company with a 5¼-length romp at five furlongs on the grass.

Sunday was more of the same, with That’s Right covering the 5½ furlongs over a firm turf course in 1:02.46.

“He always showed speed on the dirt but he frustrated us because he would always quit at the end,” said Moore. “We thought he was better than he was showing. We finally got him on the grass at Pimlico and he ran off the screen, so obviously we are keeping him on the turf.

“He is a totally different horse on the turf, the way he moves, everything about him. This race was another test with better horses, but as I told the owner (James Shannon, Jr.) after the race `he came off the turn like he did in the allowance race in his last start.’ He was four or five lengths in front of them. And there were some good horses in this field.”

The 7-2 third choice in the field of seven 3-year-olds, That’s Right never gave favorite One Timer or second choice Too Many Twizzlers any hope. One Timer closed for second, a head better than Grooms All Business.

“There was speed in the race and he got to the lead pretty easily. At this point in his career no one can catch him on the grass,” said Moore. “You look at him on the grass now and you say `how good can he be?’ ”

Hernandez, a 22-year-old native of Matanzas, Cuba, has been aboard for all three grass sprints. The victory was his first stakes win at Monmouth Park.

“He broke sharp today,” said Hernandez. “I put him on the lead and he did what he has been doing since he tried the grass – he took off and no one could stay with him.

“I kept looking around for someone to make a run at us but after a while I just said `he is going to win a stakes race.’ ”

That’s Right led the field through a :22.29 opening quarter and reached the half in :44.21 before cruising home.