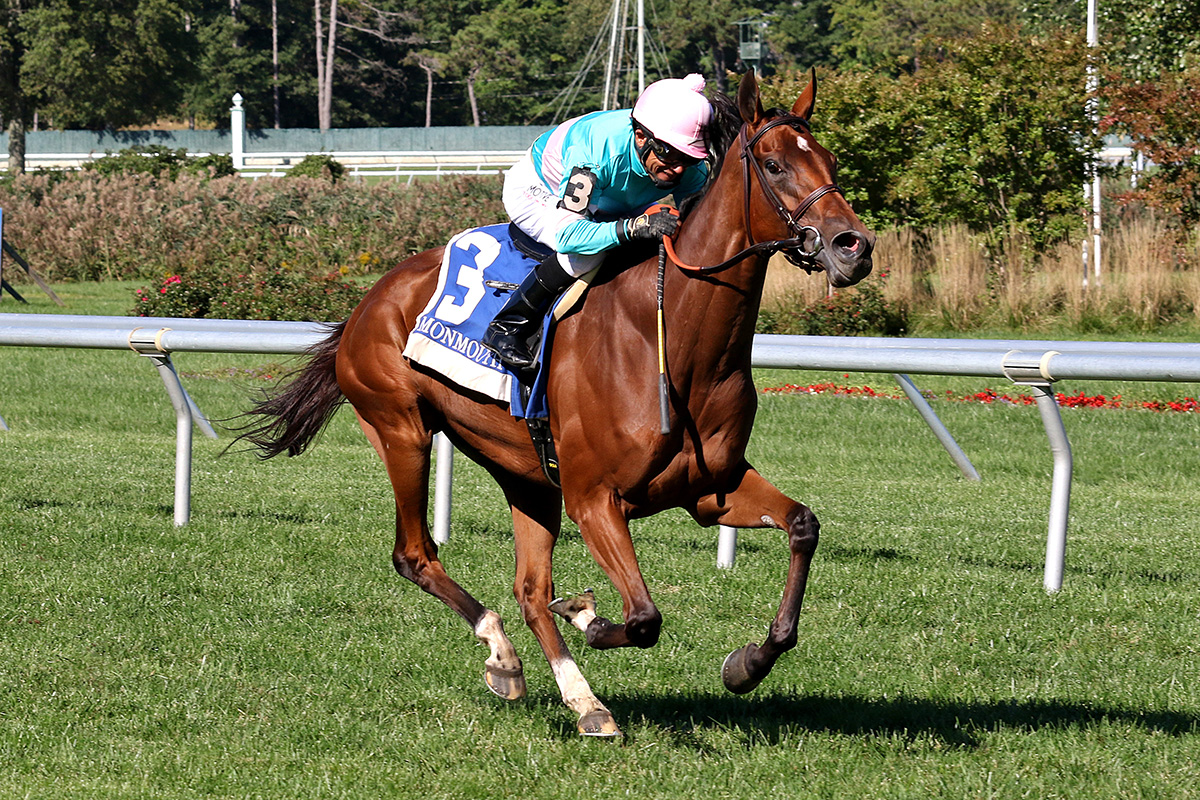 Tamahere found non-graded stakes company to be exactly what she needed to return to the winner’s circle.

The Chad Brown-trainee, who had raced against Grade 1 or Grade 2 in five of her six starts since coming to the United States last fall, went to the front and was never threatened in romping to a 7¼-length victory in Saturday’s $100,000 Violet Stakes at Monmouth Park.

The 4-year-old filly was unbothered by a yielding turf course, a gate scratch that caused a delay and a last-minute rider switch in returning to the winner’s circle for the first time since winning the Grade 2 Sands Point at Belmont Park on Oct. 10, 2020.

“This is a good filly, a really good filly,” said Luis Cabrera, who oversees Brown’s division at Monmouth Park. “Chad was trying to give her an easier spot so she could get her confidence back.

“We weren’t worried about the yielding turf. She’s a French horse. She’s used to it. She can handle a yielding turf. This was pretty much the way she ran in her last race (the Grade 2 Ballston Spa at Saratoga, where she was caught late) but it was an easier group.”

Vigilantes Way, a two-time stakes winner at the Monmouth Park meet, was second. It was another 1¾ lengths back to the Brown-trained Counterparty Risk in third.

Malborough Road was a gate scratch, reducing the field to five fillies and mares three and up.

Ferrer wound up filling in as a replacement for scheduled rider Hector Diaz, Jr., who went down a race earlier when his horse clipped heels. Diaz, excused from his remaining mounts, suffered facial cuts and was complaining of dizziness.

“I was taking a shower because I was off and I got out of the shower and Luis asked if I would ride his horse,” said Ferrer. “Of course I’ll ride a Chad Brown horse – any time. This really doesn’t happen that much where you pick up a mount this late and win a stakes race. I’ve been riding 37 years and it’s the first time I ever picked up a stakes-winning mount like this at the last minute.”

Ferrer said the paddock instructions from Cabrera were simple: get to the front and get the daughter of Wootton Bassett to relaxed.

“I came out to the paddock and talked to Luis about her. He said she likes being on the front and you can get her to relax there,” Ferrer said. “I got to the lead, she relaxed real nice on the backside, and after that it was game over. She handled the turf real nice. She was really comfortable out there.”

Tamahere returned $5.40 to win in posting her fourth victory in 13 career starts.

Monmouth Park’s 55-day meet concludes with a 14-race card on Sunday, highlighted by the $500,000 Nownownow Stakes for 2-year-olds at a mile on the grass.