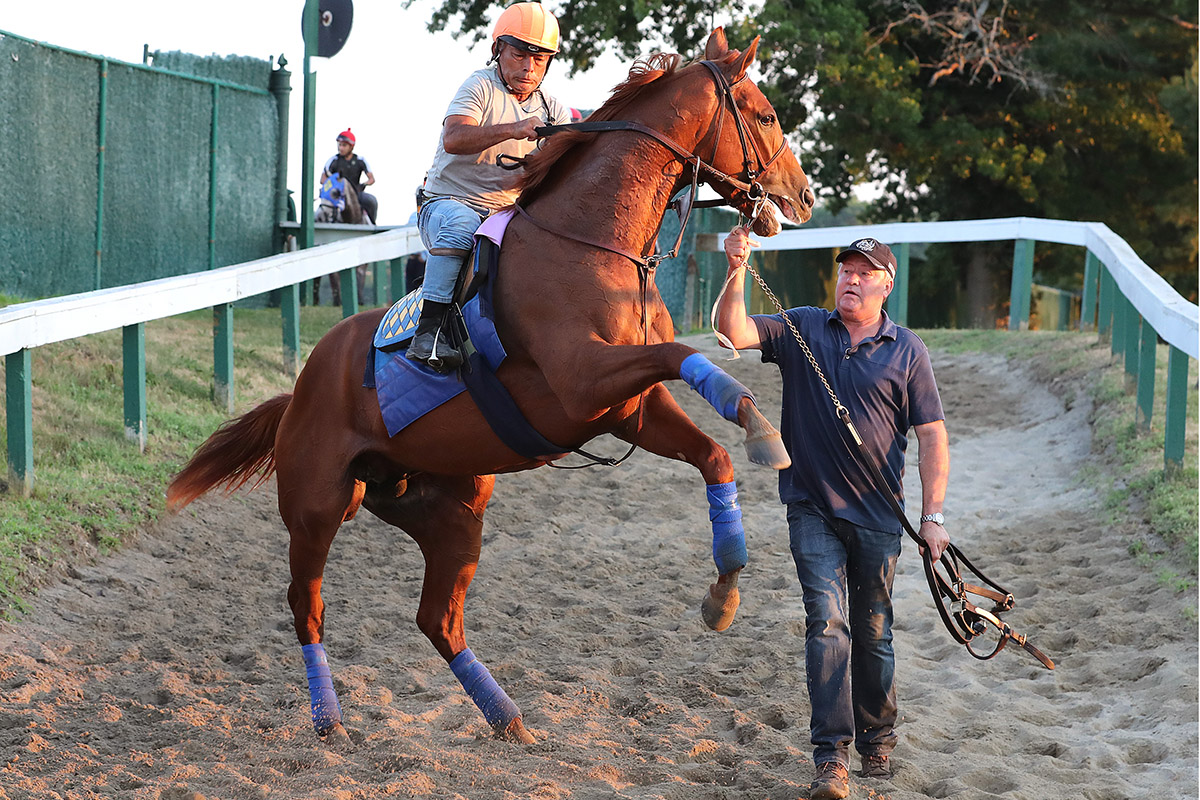 Hall of Fame trainer Bob Baffert will look to extend his record for victories to 10 in the TVG.com Haskell stakes after Taiba was installed as the 7-5 morning line for the $1 million, Grade 1 race on Saturday at Monmouth Park following Wednesday’s post position draw.

Monmouth Park oddsmaker Brad Thomas pegged the undefeated Jack Christopher as the 3-2 morning line second choice in the field of eight, which expanded with the late entries of local horses King of Hollywood and One Time Willard.

The 55th edition The Haskell, to be contested at 1 1/8 miles, is a “Win and You’re In” race as part of the Breeders’ Cup Challenge Series and guarantees the victor an all-fees paid spot in the starting gate for the Breeders’ Cup Classic at Keeneland Nov. 5.

Baffert last won the Haskell in 2020 with Authentic.

“I don’t think about records. I just think about sending a good horse there and I’ve sent some really great ones,” said Baffert. “I hope this guy is the same type of horse I’ve been bringing up there. We know he’s very talented.”

Taiba, a $1.7 million purchase and the son of 2017 Horse of the Year Gun Runner, won the Grade 1 Santa Anita Derby in only his second outing and finished 12th in the Kentucky Derby last time out while being handled by Tim Yatkeen while Baffert was serving a 90-day suspension.

“We know he’s lightly raced but I feel he’s doing really well,” Baffert said. “I wanted to watch him train. I wasn’t really convinced he was going to the Haskell. He breezed really well. He’s a big, strong heavy horse who won’t light it up in the mornings, but I was surprised what he did first out (to breeze). I let him dictate if he was ready or not. I wasn’t going to throw him into the deep end of the pool.

“I would have liked an extra week with him. But he’s doing really well. He has speed and he doesn’t get tired. The two turns won’t be a problem for him. The Kentucky Derby was a tall order for him. I don’t know what happened in the Derby. I wasn’t around. The Haskell is a great race and there are some really good horses in here. I hope the horse shows up.”

Taiba will be piloted by Hall of Fame jockey Mike Smith, a three-time Haskell winner. Most recently, Smith won the Haskell with Authentic, who went on to earn Horse of the Year honors.

As for strategy when the gates open, Baffert said, “He has to break well. Then it’s going to be up to Mike.”

Jim Baake, Gerald Ibister, Coolmore and Peter Brant’s Jack Christopher, who is undefeated in four career outings and seeking his second straight top-level win, will be trying two turns for the first time while going beyond a mile for the first time as well.

Four-time Eclipse Award-winning trainer Chad Brown, who won the 2018 Haskell with Good Magic, has awarded the return call on the son of Munnings to Jose Ortiz. The 2017 champion rider piloted Good Magic to his Haskell win and has partnered with Jack Christopher in all of his races, including their 2021 victory in the Grade 1 Champagne Stakes at Belmont.

In addition to Jack Christopher and Taiba, Grade 1 winners in the competitive field of eight include Arkansas Derby winner Cyberknife, who is trained by two-time Eclipse winner Brad Cox, and the Saffie Joseph, Jr.-conditioned White Abarrio, the winner of the Florida Deby.

Howling Time, who comes from the barn of Eclipse Award winner Dale Romans, and the locally-based Benevengo, One Time Willard, and King of Hollywood round out the field.

With Cyberknife, Cox is attempting to win back-to-back Haskells. In 2021 he captured the trophy with Juddmonte’s homebred Kentucky Derby winner Mandaloun, who was elevated to first place by disqualification.

“I’m not sure how close I am to getting to the bottom of this horse,” Cox said. “He is a Grade 1 winner and a multiple stakes winner, and he has improved. There’s more left in the tank. We’re going to have to see the best Cyberknife in order to win this race. It’s a very, very good race. If this horse can bring his last race and can move forward just a little bit, I think he’s major, major player.”

In that last contest, the Grade 3 Matt Winn Stakes at Churchill Downs at 1 1/16 miles, Cyberknife sat right off the heels of Howling Time as that colt set all the fractions and then he prevailed in a deep stretch battle to get his nose in front at the wire.

“He’s trained great. After the last two races he’s trained better and better. He was a little bit behind physically but now he’s not,” said Romans said of Howling Time. “I don’t think we have to have the lead or take a hold with him. Joe (Talamo) is a quality rider and he knows what’s he doing. I think we can just sit in our spot and, hopefully, we can run by them in the lane.”

Post time for the Haskell, which will be televised by CNBC and TVG, is approximately 5:45 PM and will be run as the 12th of 14 races on the card. First post on Haskell day is at noon.

Gates open at 9 a.m. for the Haskell day card. Parking is free.