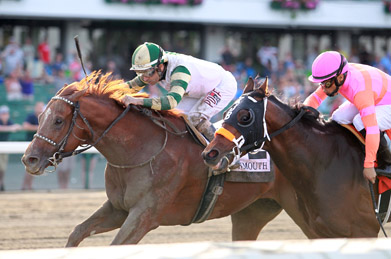 Supreme Aura made amends for a disappointing winter that quickly took him off the Kentucky Derby trail by rallying from far back to score a neck victory over longshot Roaming Union in the $100,000 Pegasus Stakes Sunday at Monmouth Park, the final of four stakes races on the 13-race card.

Ridden by Joe Bravo and trained by Michael Stidham, Supreme Aura answered a lot of questions with his victory in the mile and a sixteenth feature for 3-year-olds before a Father’s Day crowd of 23,768.

His next start, Stidham suggested, could be in the $1 million betfair.com Haskell Invitational, Monmouth Park’s showcase event, on July 29.

“This horse has so much talent but he’s been slow learning, trying to figure it out,” said Stidham. “Obviously, we were hoping he would run well in the Risen Star and lead us in the right direction in February. It just took a little more time and today he showed what he can do. It’s been a process trying to figure out what is going to help him reach his ability.”

After a dull ninth-place finish in the Grade 2 Risen Star on Feb. 17, Supreme Aura was given time off before being brought back in a pair of ungraded stakes races, finishing third in each.

It looked like the son of Candy Ride-Groton Circle, off at 7-2 odds in the Pegasus, might disappoint again until Bravo roused the colt midway through the final turn. Roaming Union, a 14-1 shot in the field of seven, survived an early three-horse duel and opened daylight on the field in mid-stretch.

But Bravo kept at it and Supreme Aura collared Roaming Union in the shadow of the wire.

“With those three horses getting into a really good fight through the turn I was able to sit off of it and let my horse breathe,” said Bravo. “The race set up good for him but you have to credit Michael Stidham’s team. They brought the horse over really ready to run a race like this.”

Stidham took blinkers off Supreme Aura for this race “because we decided the blinkers didn’t change anything.” He admitted to being concerned about Supreme Aura going two turns for just the second time in his six-race career.

“To be honest we were worried if he would get this distance,” Stidham said. “We didn’t know what he wanted to do because he did so well sprinting in his first two races. Then when we ran him long, even though it was in a tough race, he didn’t run at all. But he has been a horse that has really developed. He’s changed over the last few months and he’s finally putting it together.”

In the $75,000 Mr. Prospector Stakes, Chublicious – the only Jersey-bred in the field of eight – surged late to catch Lewisfield in the six-furlong event.

Ridden by Antonio Gallardo, Chublicious won for the 11th time in 27 career starts and scored his ninth victory in 15 lifetime starts at Monmouth Park.

Gallardo also captured the $60,000 Dan Horn Handicap with 1-2 favorite Irish Strait, holding on for a half-length victory over Golden Brown. The H. Graham Motion-trained Irish Strait covered the mile and a sixteenth on the grass for Jersey-breds in 1:42.42. It was the 6-year-old gelding’s fourth win in 10 career starts at Monmouth Park.

In the $75,000 Regret Stakes, Chalon and jockey Paco Lopez won the way a 1-2 shot should, scoring a four-length victory over longshot Jessica Krupnick.

Trained by Arnaud Delacour, Chalon covered the six furlongs in 1:10.05. The victory was the filly’s fifth in 11 career starts.