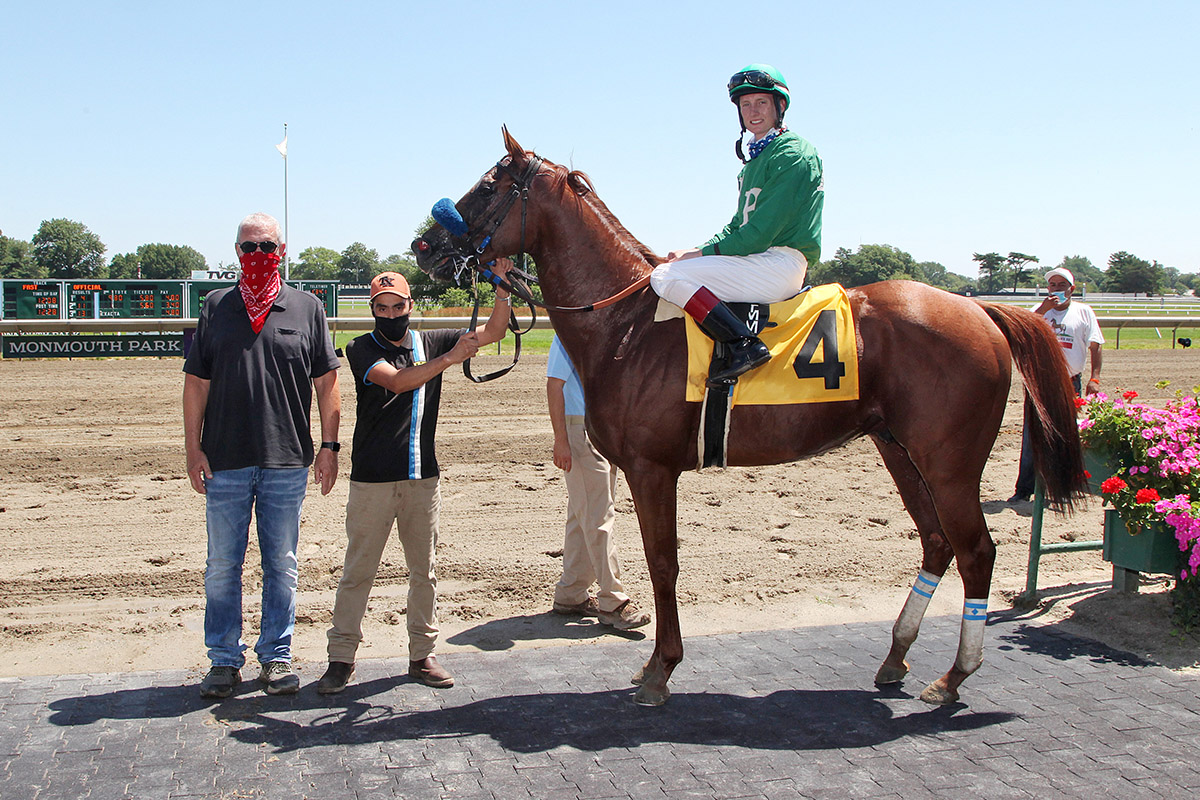 Of the seven 2-year-old fillies entered in Sunday’s Colleen Stakes at Monmouth Park, five have won their first start in virtually gate-to-wire fashion. That kind of speed is exactly what Dan Ward, the long-time assistant to Hall of Fame trainer Jerry Hollendorfer, is counting on to potentially set things up for Stellar Grace.

A new arrival to the Hollendorfer barn at Monmouth, Stellar Grace won her only start from off the pace, doing so on May 30 at Tampa Downs in a five-furlong dirt race. Joan Scott trained her then.

“They (owners Rebro and Rendina Coniglio) wanted to run her at Monmouth. We received her by van from Kentucky about three weeks ago,” said Ward. “She got a little rest and then we had a nice work with her, a very nice work. She’s a good-sized filly and came to us in excellent condition. I’m very impressed with her.”

The 82nd edition of the Colleen Stakes is scheduled for five furlongs on the grass, drawing a collection of promising runners, with Wesley Ward sending out two and Monmouth Park-based trainer Chuck Spina wheeling back My Beautiful Belle off her impressive dirt debut on July 4, when she won by two lengths. Cal Lynch has entered a first-time starter as well.

But Stellar Grace, a Kentucky-bred daughter of Verrazano-Star Keeper by Cape Blanco, is the only horse in the field who has proven she does not need to be on the lead.

“What I like is that she came off the pace in her win,” said Ward. “Most 2-year-olds, when they win, they go wire to wire. I think there’s a lot of speed that could set it up for her.

“She did win in a big field, a 10-horse field, and she came off the pace. The comments say she was between horses, too.”

Jose Ferrer, who rode Stellar Grace in her debut and has the mount again, gave the filly rave reviews for overcoming quite a bit of adversity in her first career start.

“That was a very impressive race,” he said. “She ran into some traffic, she was between horses and then she went to the rail without hesitation when I asked her to do that. Not a lot of babies will do those things. But she never hesitated.”

Ward feels Stellar Grace will handle the turf, too.

“As far as her breeding on the turf, it’s there,” he said. “The sire is by More Than Ready and the dam is by Cape Blanco. So we’re hoping she takes to it.”

Given the success by Hollendorfer’s runners during the barn’s first summer at Monmouth Park, Stellar Grace should give a good account of herself in her debut for her new connections. From 17 starters at the meet, Hollendorfer has seven wins (41 percent), two seconds and five thirds.

“Jerry is very happy with the way things are going here,” Ward said of his boss, who oversees the stable from his California base. “The people are great to work with, they like having us here and they enjoy racing. I can’t say that for all places. But it’s fun again.

“We’ve won with a couple of 8-year-olds and we’ve had a few 2-year-olds come to us. We’re looking to get more horses here and to make this a regular thing. Maybe Oaklawn and then Monmouth will be our new schedule. We’ve found that Monmouth is a good place to develop a horse and you can run on the turf, the track is good to train on and the surface is safe. Really we can’t come up with any complaints.”