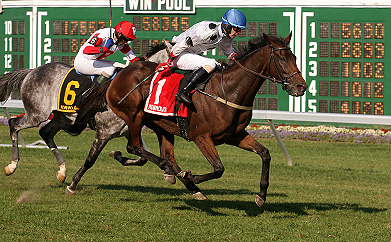 A race that is new to the United States, a Ratings Handicap, will be the featured steeplechase race on Monmouth Park’s Friday program. Monmouth’s only 2016 jumps program also will include a maiden hurdle.

The $35,000 Ratings Handicap attracted a full field of 10, and the maiden hurdle has an oversubscribed field of 14.

The Ratings Handicap, a popular race in England and Ireland jumps racing, made its first appearance on these shores in the spring of last year, and it has become a popular feature of many race meets on the National Steeplechase Association circuit. Typically, these races attract full, highly competitive fields.

Weights carried by the horses are based on the ratings assigned to them by a knowledgeable three-person committee working under the supervision of NSA Director of Racing Bill Gallo Jr.

“The Ratings Handicaps have proved to be a valuable addition to the program,” Gallo said. “The large fields attest to their popularity, and the Ratings Handicaps offer owners an opportunity to compete without placing their horses at risk of being claimed.”

The committee assigning the ratings comprises Equibase chart caller Martin Chamberlin, Mid-Atlantic Thoroughbred Editor Joe Clancy, and Virginia race announcer Will O’Keefe. In all, they rated more than 100 horses, all winners over hurdles.

Friday’s 2 1/4-mile race is limited to horses with ratings between 130 and 110. The horse with the highest rating carries 158 pounds, and weights of other starters are based on their ratings.

Topping Monmouth’s field is leading owner Irv Naylor’s Sacred Soul, trained by Cyril Murphy. Coming back from two years on the sidelines, the novice stakes winner is looking for his first victory of the current season. Riding Sacred Soul will be Ross Geraghty, a former champion jockey who made his U.S. debut at Monmouth in 2009.

Naylor, who set a record for spring purse earnings with purses exceeding $500,000, also will be represented by Jamarjo, winner of a Ratings Handicap at the Radnor Hunt Races on May 21.

Trainer Leslie Young will saddle Jamarjo and the race’s third highweight, Ballybristol Farm’s Andi’amu, a French-bred gelding who totes 154. Andi’amu most recently was second in a tough Ratings Handicap at the Iroquois Steeplechase in Nashville on May 14.

Paddy Young, the reigning champion jockey and the trainer’s husband, was named on both Andi’amu and Jamarjo.

Second in the weights at 157 pounds is African Oil, a three-time winner last year who finished third in his 2016 debut, the Marcellus Frost Novice Stakes at Iroquois. Trainer Kate Dalton named her husband, top jockey Bernie Dalton, to ride.

The field also includes a talented newcomer, Rebecca Shepherd’s Curve of Stones, who is undefeated over fences. A maiden winner at the Virginia Gold Cup on May 7, the five-year-old Arch gelding came back in two weeks to win a Radnor allowance hurdle. Apprentice jockey Barry Foley will ride for trainer David Bourke.

Here is the field for the $35,000 Ratings Handicap in post-position order. The number in parentheses at the end of each profile is the horse’s current rating: