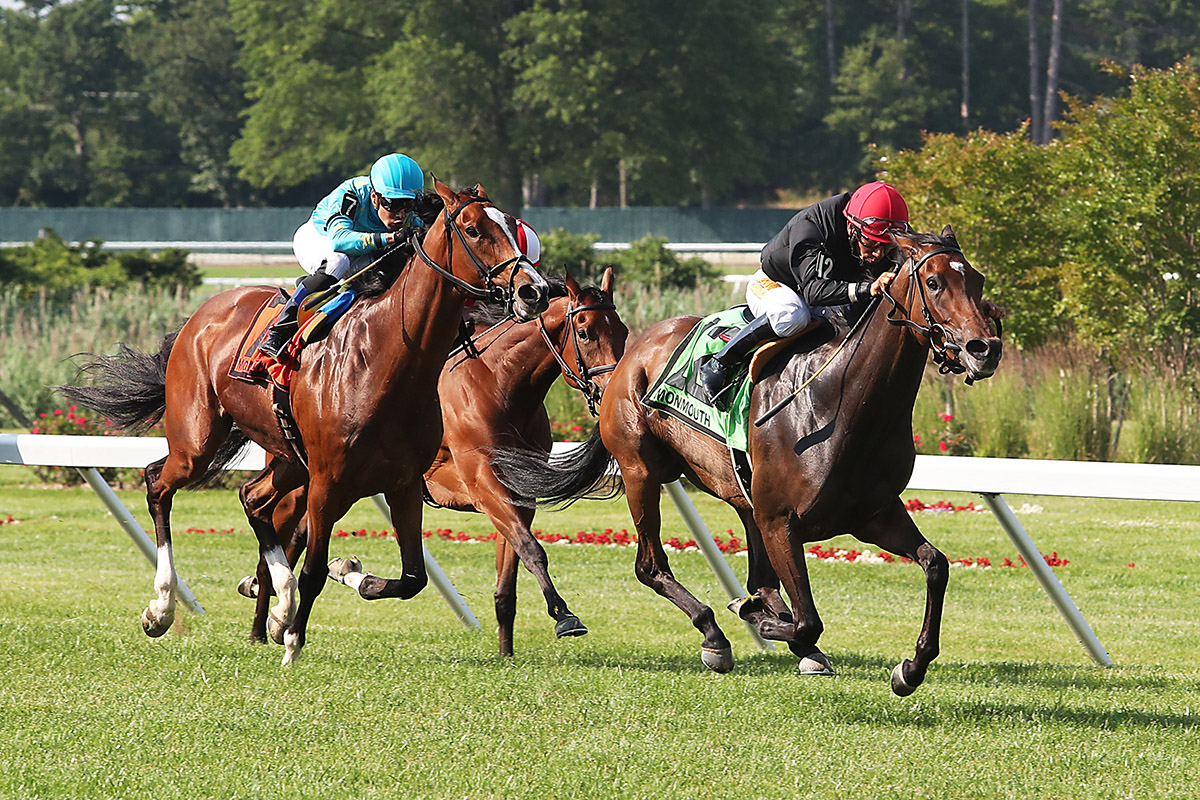 Even after 11 career starts, Hall of Fame trainer Shug McGaughey has been saying that the best is yet to come for Vigilantes Way.

Sunday’s Grade 3 Eatontown Stakes at Monmouth Park may be the start of that for the 4-year-old filly.

Perfectly positioned to chase soft early fractions by jockey Paco Lopez despite leaving from post position 12, Vigilantes Way showed an impressive closing kick to win the $150,000 Eatontown Stakes by 2¼ lengths before a season-high crowd of 12,562 on Father’s Day.

It marked the first graded stakes victory for the Phipps Stable homebred, a daughter of Medaglia d’Oro-Salute by Unbridled.

“I thought Paco rode a good race,” said McGaughey. “He got her away from there from the outside and had her in good position. I knew she would finish. She had trained very well before she went down there. It was just a matter of whether she would take the shipping on a hot day like today. She obviously did. I’m very proud of her.”

Able to break alertly with Vigilantes Way, Lopez sat behind pace-setter Valletta through tepid fractions of :24.54, :48.70, 1:12.12 and 1:35.87 for the opening mile of the mile and a sixteenth race on a turf course that has been playing fast. Lopez asked his filly coming out of the final turn and she responded in a big way, easily surging past Valletta, who held for second. Crystal Cliffs and Counterparty Risk finished in a dead heat for third, another half-length back, in the full field of 12 fillies and mares three and up.

“Sometimes this horse has speed, sometimes not,” said Lopez. “The post position (12) is something I usually don’t like but today it worked to our advantage. I was able to get out there and get in a good position behind (Valletta). It set up nicely for us.

“Shug told me to do whatever I felt I needed to do. She is usually in the top three early and I knew she would finish. She has a strong kick. It looked like there was a lot of speed in the race but they went kind of slow so I was happy with the position I was in throughout the race. I didn’t have to make up a lot of ground.”

McGaughey was especially encouraged by Vigilantes Way’s prospects for the Eatontown Stakes off her last race, when she closed into slow fractions on the Preakness Day undercard at Pimlico, falling a half-length short to multiple-graded stakes winner Mean Mary.

“I thought her last race in Pimlico was a really good race because she kind of got jumbled up at the start and got out of position,” said McGaughey. “She only got beat a half-length by Mean Mary, a multiple-graded stakes winner. Now maybe we can go on and get her stretched out, maybe to a mile and an eighth. She’s handy. She might be able to get it. When that will be I don’t know. But today I am very pleased with the way she ran and very proud of her.

Vigilantes Way returned $9.20 to win for her fifth lifetime victory in 12 starts. She has failed to hit the board only twice in her career.