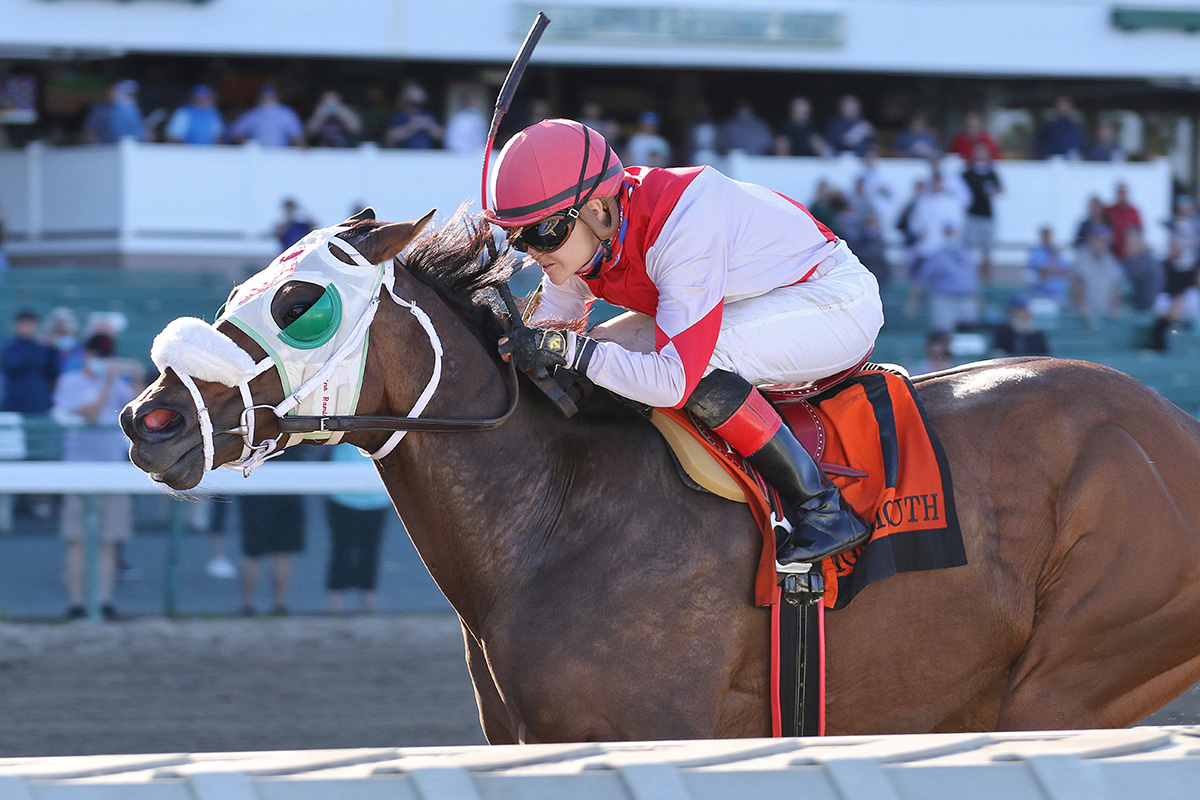 When trainer Antonio Arriaga convinced Silvino Ramirez to claim Share the Ride for $16,000 on July 5 it was with the belief that the 5-year-old gelding had the ability to be a stakes winner.

It took four starts – two on the turf, which the horse had never tried before – but Arriaga’s faith was rewarded when Share the Ride dominated the field in a gate-to-wire victory to capture Saturday’s $100,000 Mr. Prospector Stakes at Monmouth Park by 3¾ lengths, giving jockey Ferrin Peterson the first stakes win of her career.

Ridden aggressively from the outset, Share the Ride broke sharply from the far outside in the six-horse field, which included multiple Grade 1 winner Mind Control, and cruised through fractions of :22.45 to the opening quarter and :44.94 to the half.

He was never seriously threatened, with even-money favorite Awesome Anywhere chasing to get second, 1¼ lengths ahead of 6-5 shot Mind Control.

The winning time for the six furlongs was 1:09.18, with Share the Ride paying $19.40 to win in notching the first stakes victory of his 16-race career.

“Part of it was being aggressive on my part,” said Peterson, riding the horse for the first time. “He had just run long on the turf and now he was back going short on the dirt, which (agent) Julie Krone has told me it can make them sharp when they do that. (Arriaga) told me I needed to be aggressive leaving the gate because he tends to follow.

“So I gave him a really big warmup, got away from the pony, and he was really sharp. Honestly, though, the trainer and I were both surprised he broke on the lead. But then I was able to get him to relax and he had that the big kick when I asked for it. He was strong today.”

In his first start for Arriaga on Aug. 9 going six furlongs on the dirt in an optional $50,000 claimer, Share the Ride came off the pace to finish second, a length behind Awesome Anywhere. He was then off the board in the first two turf tries of his career, the most recent being a fifth-place finish in the Grade 3 Red Bank Stakes one week ago.

“We didn’t expect him to go wire to wire like this,” said Arriaga. “I think he needed his last race going longer to open up his lungs. Then we cut him back from a mile to six furlongs for this race. I think that made a difference. He was very sharp today.

“We put him back on the dirt because I think he is better there. But I still believe he can be good on the turf. He’s been eating well and he didn’t back up on anything and he has been acting good. He was nominated to this race all along, so that’s why we decided to bring him back in a week.”

A Kentucky-bred son of Candy Ride, Share the Ride notched his sixth career victory. It was the third stakes win of Arriaga’s 421-race career, though he said “this is the biggest one so far.”