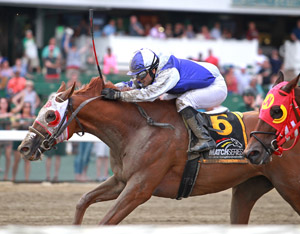 Trainer Mary Eppler has stopped being surprised by Page McKenney’s accomplishments, having come to accept the tough-as-nails gelding for what he is.

“He’s just a special horse,” she said. “There’s not much else you need to say about him.”

Fresh off a victory in the Grade 3 Salvator Mile at Monmouth Park on May 26, the 8-year-old Page McKenney will make his 56th career start in Saturday’s Grade 3 Philip H. Iselin Stakes at Monmouth.

The 83rd edition of the Iselin Stakes, which carries a purse of $100,000, has drawn a field of seven 3-year-olds and up going a mile and a sixteenth. It’s the eighth race on the stakes-filled 13-race card.

The distance is one that Page McKenny is 11-for-15 at during his career.

“The longer the distance the better he is,” said Eppler, who has trained the son of Eavesdropper-Winning Grace for his entire career. “He came out of that last race at Monmouth Park perfect. No problems whatsoever. And he’s training like he always trains. He has been very good.”

Page McKenney will be looking to add to a career bankroll that stands at $1,870,940, thanks largely to 22 wins and 15 seconds. Remarkably, he is coming off a race in which he earned a 101 Beyer Speed Figure.

“If he is slowing down I haven’t seen a sign of it yet,” said Eppler. “He does whatever you ask of him.”

Being in a race with just one speed horse – Harlan Punch – could pose a challenge for Page McKenney, who closed stoutly to win the Salvator Mile. The presence of the Imperative is also a potential roadblock, although the Robert Hess-trained gelding has not raced since winning the Grade 2 Charles Town Classic on April 22, 2017.