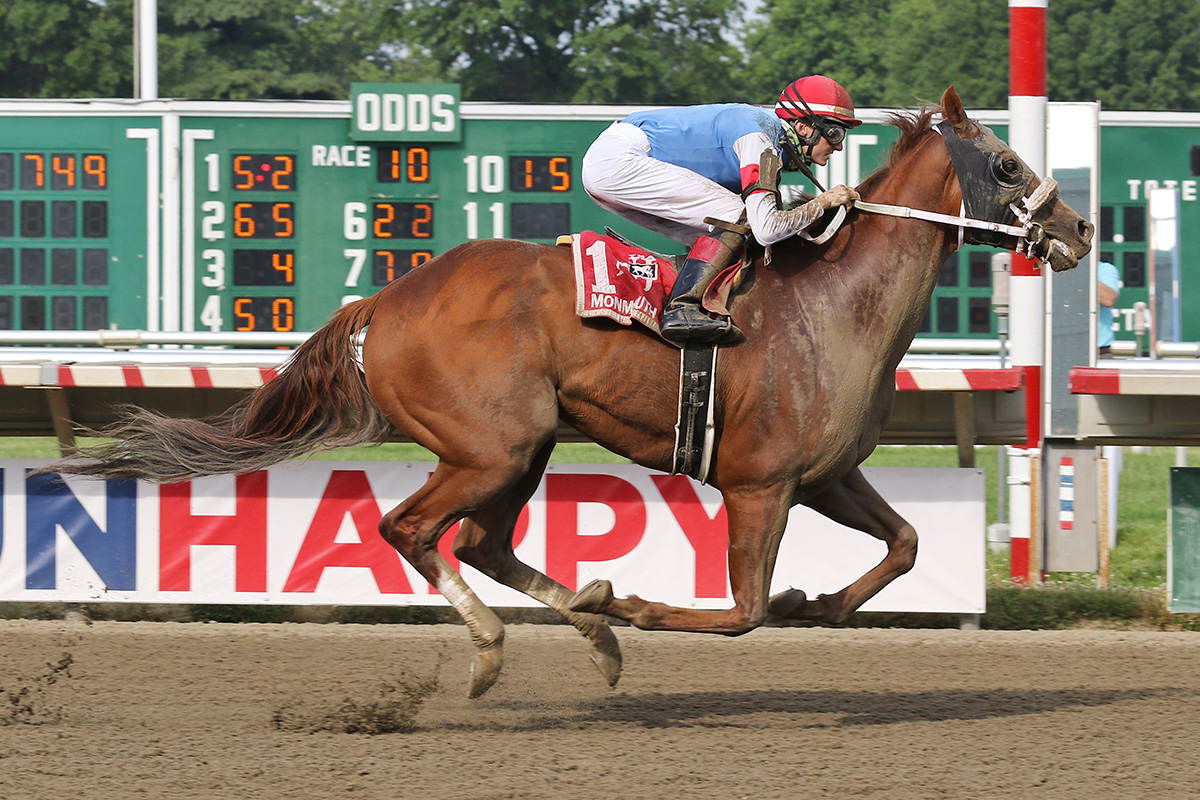 Sometimes it’s the little things that make a big difference.

Taking over the training of Royal Urn for the first time, Kelly Breen changed some of the colt’s work tactics in the mornings and then added blinkers for the afternoon.

The result was an impressive 2¼-length victory in Sunday’s $75,000 John J. Reilly Handicap for Jersey-breds at Monmouth Park, with Royal Urn rallying from mid-pack in the stretch to pass a trio of horses for his first victory in more than 20 months.

Trevor McCarthy rode the winner, who had been trained by Michelle Nehei before owner and breeder John Bowers Jr. sent the 4-year-old colt to Breen’s care.

“The race set up perfectly for this horse,” said Breen. “I wasn’t crazy about the one post but sitting the trip it all worked out. He really kicked it in.

“We changed his training a little bit. The things that we did with him worked. They don’t always work. I changed a couple of his training tactics. Blinkers were one of them. He’s a good feeling horse. I don’t know that when I first got him if he was as focused as he should be. That’s why we put the blinkers on him and it all worked out.”

McCarthy was able to bide his time early with the late-running son of Kantharos-Born to Royalty by King of Kings, getting the best view of a three- and four-horse speed duel at times in front of him.

Prendimi, who won the Reilly last year at odds of 26-1, took all of the early pressure from Jersey Joe B and Visionary, then later from Golden Brown and Cozy Lover. He still held for second, two lengths ahead of Golden Brown.

McCarthy and Royal Urn took full advantage, breezing past a trio of frontrunners in deep stretch.

“The race developed exactly the way I wanted it to. I gave him a good warm up, broke him well and then grabbed a nice hold of him and let him get himself together,” said McCarthy. “About the three-eighths pole Brother Chub came off the fence, so I dropped back down and then eased my way out. I was following good horses in front of me. When I saw Brother Chubb not really responding I told myself to wait because I knew I had a lot of horse and it seemed like everyone else was still riding.

“Kelly has been happy with him in the morning so I knew he’d be ready. He’s run some very good races against open company so I knew against Jersey-breds today he was going to be pretty tough.”

Royal Urn paid $7.00 to win as the second choice to Golden Brown in the field of 10. The victory was his third in 16 career starts.