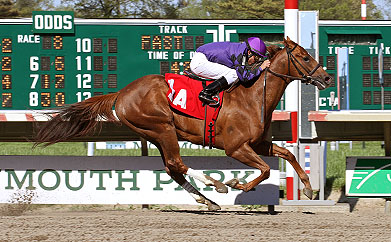 Saturday’s Opening Day feature, the $60,000 Wolf Hill Stakes, has drawn an overflowing field of 14, including New Jersey-bred Rainbow Heir, who will look to defend his title after crushing his rivals in last year’s rendition by nearly eight lengths.

The Wolf Hill is set to go five furlongs on turf, but with the strong potential of showers tomorrow, a surface switch to the main track, just like last year, might be in order.

“He’ll go either way,” said Jason Servis, who trains Rainbow Heir for New Farm.  “He’s versatile that way. He can run on anything.”

A truer statement could not have been uttered.  Rainbow Heir has won on turf, dirt, wet and dry.  He enters Saturday’s stakes off a turf sprint at Keeneland in the Shakertown (G2), where he finished 7th.

“That wasn’t his day,” Servis said.  “They got away with a slow first quarter for turf sprinters (:22) and after that there wasn’t any catching up.  But he’s been training good up here and should put in a nice effort Saturday.”

On Saturday, Rainbow Heir will break from post four with Trevor McCarthy back aboard.The pair are pegged as the 2/1 morning line favorite.The Wolf Hill Stakes goes as race 10 on the 11-race program, which gets underway at 12:50 p.m.