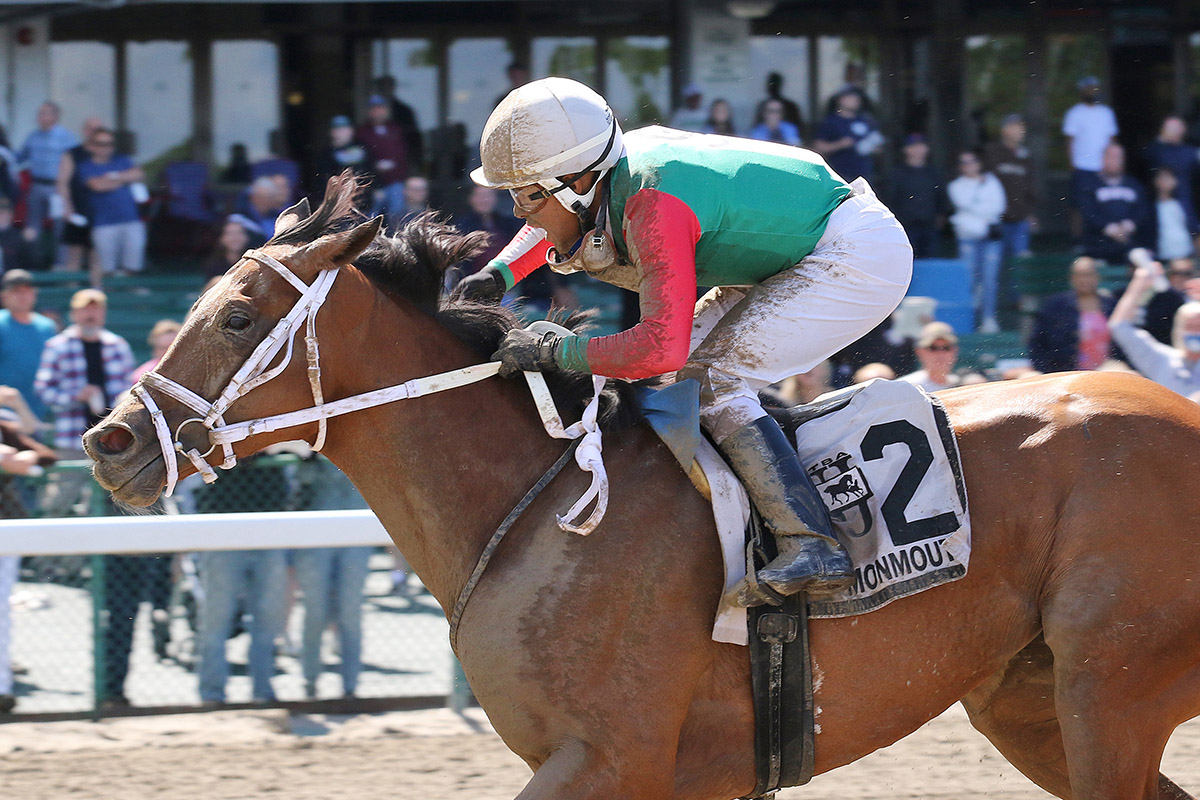 Calixto Juarez did his best to try to convince his son – jockey Nik Juarez – to ride the horse he trains, Princess Georgia, in Monday’s $76,500 Spruce Fir Handicap at Monmouth Park.

When that failed he had to settle for the next best thing: Watching Princess Georgia score a late-running three-quarters length victory, doing so by running past Diamond Play in deep stretch.

The victory in the six-furlong dash for Jersey-bred fillies and mares 3 and up marked the elder Juarez’s first stakes win as a trainer. He began training in 2014 and didn’t have a starter in 2020.

“Right now I can’t touch the ground,” said Calixto Juarez. “I’m sure I’ll feel even better when we get the check (from the purse) but right now I am floating. I feel fantastic. And to beat my son … I don’t know what to say.

“I asked him to ride this horse. He said `No, I am riding the winner.’ He made a mistake but kids don’t always listen to their parents, so what can you do? We know it’s just business. I know he is very happy for me.”

Ridden by Carlos Hernandez, Princess Georgia rallied from sixth in the seven-horse field at the top of the stretch to come rolling late down the stretch just as it seemed Diamond Play was a winner. It was another half-length back to 2-1 race favorite Groovy Surprise in third.

“When I broke out of the gate I took back my filly because I saw the speed out there and my horse is so good at making one big run,” said Hernandez. “So I wanted to wait and get her to relax. I knew when I asked her she would give me everything so I just needed to put her in a good spot.

“I knew Diamond Play was the filly to beat. That is the one Nik Juarez chose to ride so I was able to pick up the mount on this one. It worked out great for me.”

The victory was the third straight and fifth in 27 career starts for the 6-year-old daughter of El Padrino-Vodka High by Mount McKinley. It marked her third straight victory in her first start since returning to Juarez’s care.

Juarez had her for all of 2019 before opting to stay in Florida in 2020 and not train, which prompted owner CJ Racing to turn Princess Georgia over to Alison Delgado. Juarez just got her back this month.

“She is in really top form. She has been training great since I got her back,” said Juarez, a former jockey who has now won 13 races as a trainer.

Racing resumes at Monmouth Park on Friday, June 4, with a six-race twilight card that will feature the first two 2-year-old races of the season. First race post time on Friday is 5 p.m.