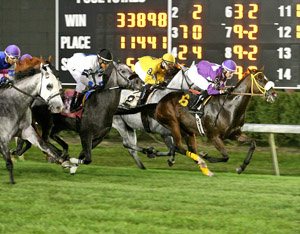 Postino’s Vow used a well-timed rally to catch 4-5 favorite Desperado in the final yards and went on to a half-length victory in the $35,000 featured allowance last night to kick off the first of five all-turf thoroughbred cards during the Monmouth-at-Meadowlands meet.

Postino’s Vow, ridden by Trevor McCarthy and trained by Skip Einhorn, closed relentlessly after it had appeared the Desperado had gotten the jump in mid-stretch on the field of eight other Jersey-breds in the mile and a sixteenth race.

Jockeys Jairo Rendon, Jorge Gonzalez and McCarthy each won two races to account for all of the victories on the six-race card.

All-turf racing will continue at the East Rutherford facility the next two Fridays and Saturdays (Sept. 21 and 22 and Sept. 28 and 29). Post time is 7 p.m. nightly.