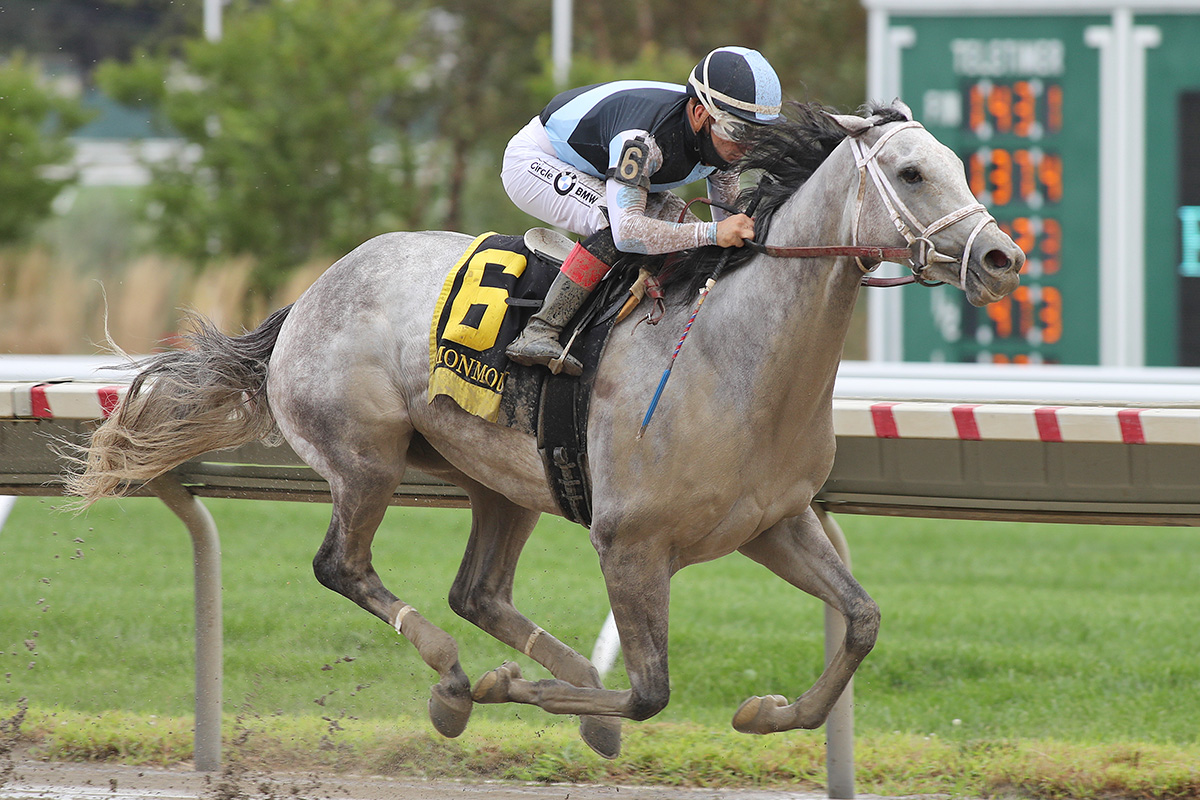 Valiance added another dimension to an impressive start to her career, drawing away in mid-stretch over a sloppy track to win Saturday’s $150,000 Eatontown Stakes at Monmouth Park.

Trained by Todd Pletcher, the $650,000 yearling purchase entered the Eatontown with four wins from six career starts, with five of those races on the grass. She raced once on the dirt but never over a sloppy track.

“I thought she ran great,” said Pletcher. “It definitely seemed like she improved in her training on the dirt so we weren’t concerned when it came off. It looks like she handled it really nicely. He (jockey Nik Juarez) rode her very confidently.”

The Eatontown Stakes, originally scheduled for a mile and a sixteenth, was switched to the main track because of early morning rain.

“I wasn’t worried about the sloppy track with her,” said Juarez. “I got to ride a race on the dirt with her at Gulfstream. Todd had her in stakes race in Florida (the Powder Break Stakes on May16) and it came off the grass and she ran on the dirt that day. So I was happy she had a dirt race under her because all of her other starts have been on the grass. I was really confident today.”

Juarez was able to sit tucked in behind dueling leaders Valedictorian and Gotham Gala in the reduced field of five through fractions of :23.85 to the opening quarter, :47.68 to the half mile and 1:12.60 to six furlongs.

Midway through the final turn he nudged Valiance to the outside and she immediately drew even with Gotham Gala, with Valedictorian starting to retreat. Gotham Gala tried gamely to stay with Valiance, but Juarez had plenty in reserve, winning by a widening 1½ lengths. It was another 15¼ lengths back in third to Valedictorian.

“We had a perfect trip, sitting right behind the speed,” said Juarez. “When we turned for home I was able to tip her out and she was much the best. She just ran away from them. I knew Valedictorian would go out for the lead. So I just wanted to wait with her and let her settle and we were able to do just that.”

Valiance, a daughter of Tapit, paid $3.80 to win as the favorite. The 4-year-old filly, owned by Eclipse Thoroughbred Partners, Martin Schwartz and CHC Inc., started her career 3-for-3 as a 3-year-old, with two of those victories on the turf at Monmouth Park. She is now 5-for-7 lifetime.