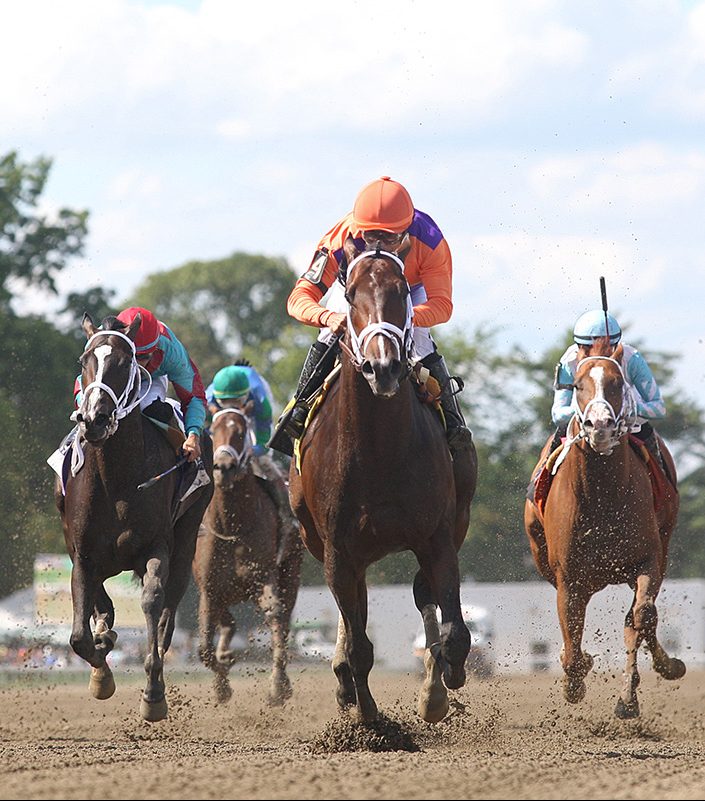 Given a perfect set-up with a stalking trip behind dueling leaders, jockey Jairo Rendon only had one difficult decision to make midway through the turn of Saturday’s $100,000 Jersey Shore Stakes at Monmouth Park.

Should he loop outside with Provocateur or wait for the rail to open?

The decision turned out to be an easy one when the rail provided an opening too tempting to pass up, allowing the Todd Pletcher-trainee to slip through easily on the way to a two-length victory over an unlucky Witty in the six-furlong dash for 3-year-olds.

“When the rail opened up, if he didn’t shoot in there the way he did he might have not won,” said Anthony Sciametta, who oversees Pletcher’s division at Monmouth Park. Jairo rode a great race. He had to use the opening on the rail when he did. Ideally, he wanted to sit and go around them. But when it opens up like that and you have the chance to take it you have to go for it – and Jairo did just that.”

Owned by My Racehorse Stable and Spendthrift, Provocateur had a rail trip behind Defend and Lightening Larry as those two went at it through an opening quarter of :21.67 and a half in :44.04.

By the middle of the final turn, Rendon just had to figure out which way to go – inside or out – with a horse that was full of run.

“I was happy when I saw those early fractions and where I was sitting just off the speed. I just had to ask him to go and he did.”

Provocateur, a $600,000 yearling purchase, recorded his second stakes victory and third win in eight career starts. Prior to the Jersey Shore Stakes, the son of Into Mischief-Cayala by Cherokee Run was a fading third in the Grade 1 Woody Stephens on June 11.

“This horse’s last race was tough,” said Sciametta. “But the two starts before that he showed his ability in both races.

Witty, breaking from the rail, hesitated at the start, spotting the field five lengths before rallying from last in the eight-horse field to get second, 1½ lengths ahead of longshot Speaking.