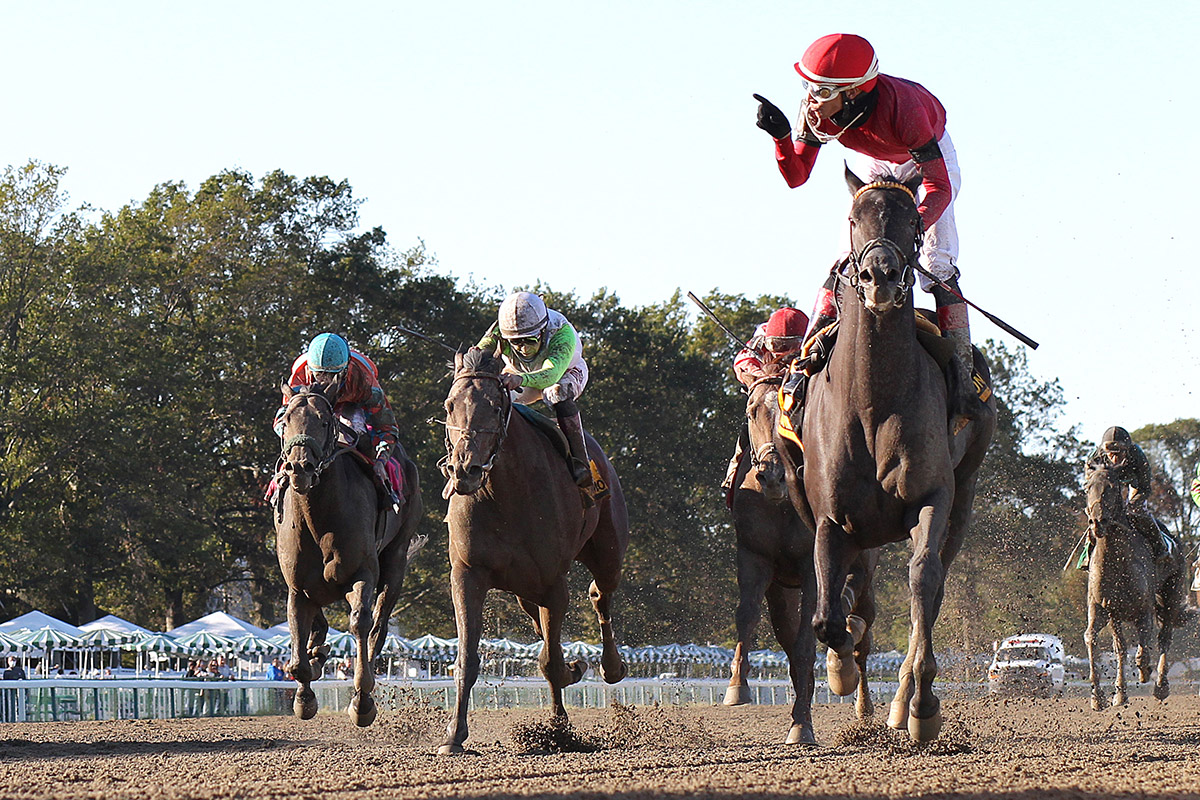 Pirate’s Punch left no doubt about the outcome this time.

Disqualified from first for interference in the stretch in the Grade 3 Philip Iselin Stakes four weeks ago, Pirate’s Punch drew away coming out of the final turn to win the $150,000 Grade 3 Salvator Mile by two lengths on Sunday at Monmouth Park.

Now it’s onto the Breeders’ Cup Dirt Mile on Saturday, Nov. 7, for the half-brother to 2017 Haskell Invitational winner Girvin, according to trainer Grant Forster.

“The Breeders’ Cup Dirt Mile is definitely our plan based on these last two races,” said the Kentucky-based Forster. “For us here in Kentucky it’s a home game this year. He does have one race at Keeneland when he ran very well as he was just starting to improve last fall. I know the owners and I are on board.

“We were treating this as our `win and you’re in.’ He won it, so I guess we have to put our money where our mouth is and give a horse the chance to show what he can do on the national stage.”

The speedy 4-year-old son of Shanghai Bobby, who generally races on the lead, was kept off the early quick pace set by Prendimi and Wind of Change, with the duo taking the eight-horse field to an opening quarter of :22.69 and a first half in :45.80.

Entering the final turn, jockey Jorge Vargas, Jr. gave Pirate’s Punch his cue, with the gelding sweeping three wide and immediately getting a jump on the field as he made the lead. Final time for the mile was 1:37.19.

Top Line Growth, the Laurel Park record holder for a mile, was able to get second, a head in front of Bal Harbour.

“I’m pleased they gave me another chance to ride this horse after the Iselin,” said Vargas. “I didn’t feel what happened that day was all that bad but I still felt bad about it and apologized to the owners afterward. They told me I did everything right and rode a good race.

“Obviously today we wanted to be on the lead because that’s the best way he has run before, but they went quick early on. I didn’t panic. I just tried to keep him clean. I knew I was on the best horse in the race. After the three-eighths he just took off. I wasn’t going to challenge that fast early speed. I know this is a good horse and he will get in gear.”

Now with a 5-3-4 line from 17 career starts, Pirate’s Punch earned his first graded stakes win. He paid $6.60 to win as the favorite in the field.

“He really validated that last race,” said Forster. “I said before the race I was concerned about bringing him back this quickly with the travelling (from Kentucky), but every day he has been a 10 out there on the track for us and he gave us every reason to come back.

“The jockeys who have ridden him have always said he will rate. He has run some very good races from just off the pace, but of course this is the first time to get a win doing it that way with such a fast early pace being set. Credit to Jorge Vargas, Jr. He rode a brilliant race. He didn’t panic being on the favorite. He knew what he had underneath him. The horse runs the turns very well and Vargas asked him around the turn and he responded as we know he can.”

Owned by Gulliver Racing LLC, Craig Drager and Dan Legan, Pirate’s Punch boosted his career earnings to $332,751 with the $90,000 winner’s share of the purse.

He also moved Vargas a step closer to what would be a career riding highlight.