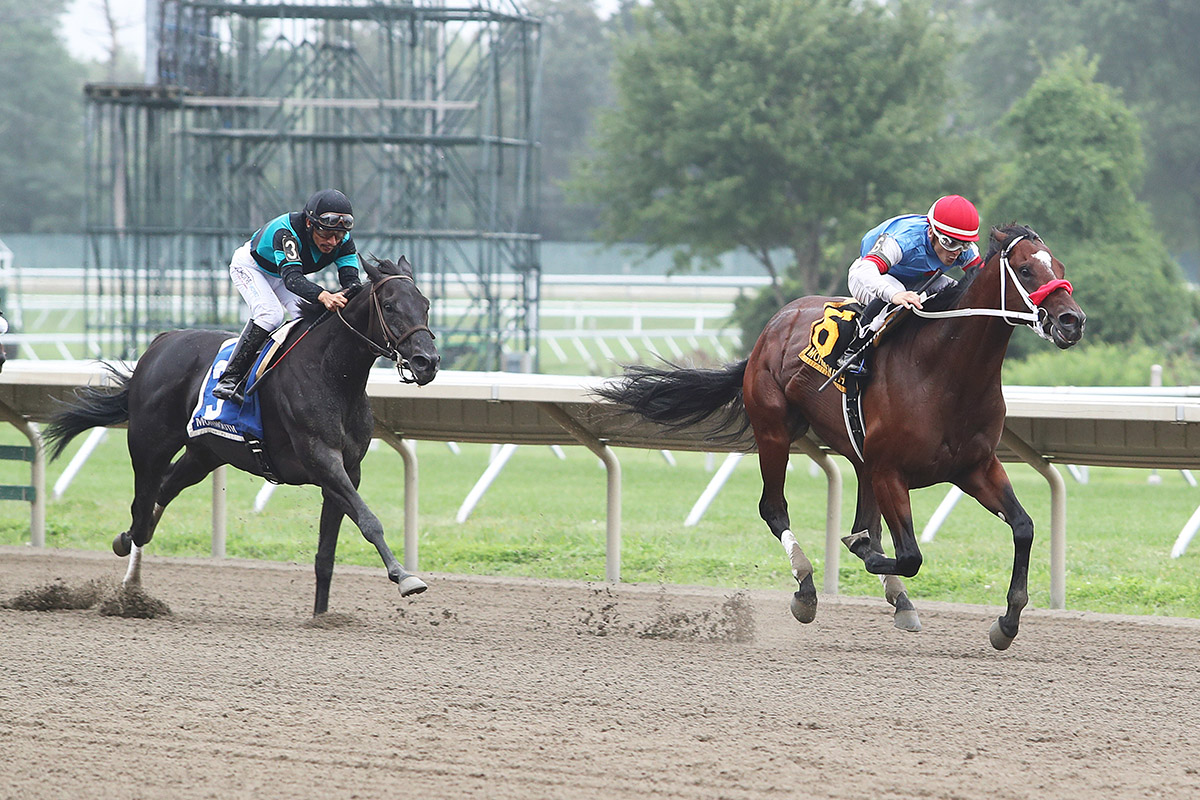 Pickin’ Time, who held off Golden Brown to win by 1¾ lengths in the six-furlong New Jersey Breeders’ Handicap for 3-year-olds and up, is owned and was bred by John Bowers.

Bowers was honored during the day as the 2020 New Jersey Breeder of the Year.

“It’s great that Pickin’ Time and Mr. (John) Bowers would win this race on Jersey-bred day,” said Breen. “He’s a top breeder. It’s difficult when you have a top 2-year-old and you have to transition to 3. Then at 3, having to run against older horses in a race like this like Golden Brown, who is a top older horse, one of the best Jersey-breds ever.

“We knew we had our work cut out for us. Our horse was training well and doing well. I’m just glad he showed up. We talked a lot about the cut back (to six furlongs from a mile and an eighth in the TVG.com Haskell Invitational in his last start). We sharpened him up with the breezes. We did all I thought we needed him to do to get him ready for a top effort off the shelf. He showed up. They went fast. But he’s a fast horse too.”

Ridden by Nik Juarez, Pickin’ Time looped three-wide coming out of the final turn while Golden Brown, ridden by Lopez, shot the rail.

“It was for the best that I had to go wide coming out of the final turn,” said Juarez. “The favorite (Golden Brown) was down on the rail so I wanted to get the jump before he got through and make sure I was clear and kick some dirt. We were able to get the jump on him and that made a difference.”

Pickin’ Time, making his first start since being elevated to fourth in the Grade 1 Haskell, returned $8.60 to win.

The winning time for the son of Stay Thirsty was 1:09.58, with Dr. Doyle getting third.

The other two stakes races on the 12-race card for state-breds belonged to Lopez.

The track’s leading riding guided Amatteroftime to a 4¾-length victory over Prendimi in the $125,000 Charles Hesse III Handicap at a mile and a sixteenth and also captured the $100,000 Eleven North Handicap, doing so with a rousing stretch run that saw Alta Velocita get up to win by a nose over Jersey Jewel.

Amatteroftime, trained by Silvino Ramirez, earned his first stakes win since capturing the 2018 New Jersey Breeders’ Handicap. The 6-year-old gelding is now 5-for-13 at Monmouth Park during his career.

Amatteroftime paid $5.40 to win, covering the mile and a sixteenth in 1:44.49. Optic Way finished third, another two lengths back.

Lopez’s victory in the six-furlong Eleven North aboard Alta Velocita wasn’t nearly as easy, with the filly rallying from eighth, seven lengths back, at the quarter pole, finally catching Jersey Jewel on the wire. The winning time was 1:10.45.

Though Alta Velocita has won four of her last five starts, the Eleven North marked the first stakes victory in her 15-race career.

“At the top of the stretch I was hoping we’d get fourth because of how far back she was. Maybe fifth and then a long drive home,” said winning trainer Andrew Simoff. “As it got closer my hopes picked up. I still didn’t she was going to get there inside the sixteenth pole. She had that late surge and switched to that right lead and took off and that was it.”

Alta Velocita returned $6.20 in the field of 11 fillies and mares, three and up.

“At the five-eighths and then the half-mile pole I was thinking `she is dead last,’ ” said Lopez, who is virtually assured of his eighth Monmouth Park riding title. “I let her go very wide and let her do her thing. She was flying. I think she made up 10 lengths in the stretch.”