O’Connell Brings Trio Into Saturday’s Crank it Up 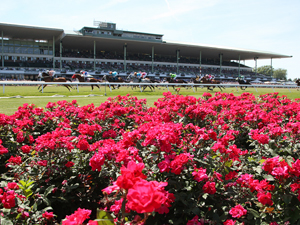 Trainer Kathleen O’Connell will send three to the starting gate for Saturday’s $60,000 Crank It Up Stakes, going five furlongs on the Monmouth Park turf:  Lu Lu Laura, Stormy Embrace and Who’s the Lady.

Darsan Inc.’s Who’s the Lady exits her first try against graded stakes company in the Grade 3 Miss Preakness Stakes at Pimlico where she finished 11th on May 19.

“She had a tough post, being in the 13 spot,” said O’Connell in regards to the Miss Preakness. “She’s been training awesome and I think this is a good spot for her.”

Prior to that outing, the 3-year-old filly by Munnings started off her career a perfect 4-for-4, all in gate-to-wire fashion, including a win in the Any Limit Stakes on the Gulfstream Park main track.

Who’s the Lady worked a bullet at Monmouth on June 1, going five furlongs in 1:00, the fastest of the 22 horses that went the distance on the day.

O’Connell’s other entrant exiting the Miss Preakness is Stormy Embrace, who finished ninth.

“Stormy (Embrace) missed the break in the Miss Preakness and could never recover,” said O’Connell. “She has some turf in her pedigree and I think she will like the grass. She’s another one who’s been training great.”

The 3-year-old filly by Circular Quay out of the Stormy Atlantic mare Stormy Allure found the winner’s circle two races back. She took down four others in a $50,000 allowance optional claiming event, going gate-to-wire on the Gulfstream Park main track on April 27.

The final O’Connell entry in the Crank It Up is Lu Lu Laura, who will break from the rail Saturday.

“We couldn’t be happier with how she’s doing,” said O’Connell, who conditions the horse for Stonehedge LLC. “I think she’ll like the turf because of her pedigree.”

The daughter of Circular Quay out of the Untuttable mare Arealhotlover is making her first appearance in 2017 after finishing her 2-year-old campaign earning second in a $50,000 allowance optional claiming event on the main track at Tampa Bay Downs.

Her last win came in October versus optional claiming company, grabbing the lead into the far turn in a six furlong event and never looking back to score by 3 ½ lengths.

Lu Lu Laura has worked six times before her seasonal debut including her latest coming over the Monmouth Park main track, where she went five furlongs in 1:01 3/5.

“When it comes to races going 5/8ths, there really isn’t much planning you can do,” said O’Connell. “It will all depend on the jockeys and how they all break and go from there.”

Two horses are entering the Crank It Up after breaking their maiden at first asking on the turf, both from Jason Servis’ barn. Hidden Mystery, owned by Gary and Mary West, got to the winner’s circle closing late to grab a maiden special weight event going five furlongs by a nose while Dennis A. Drazin’s Mighty Patient finished well to graduate by ¾ of a length in maiden claiming company sprinting at Gulfstream Park.