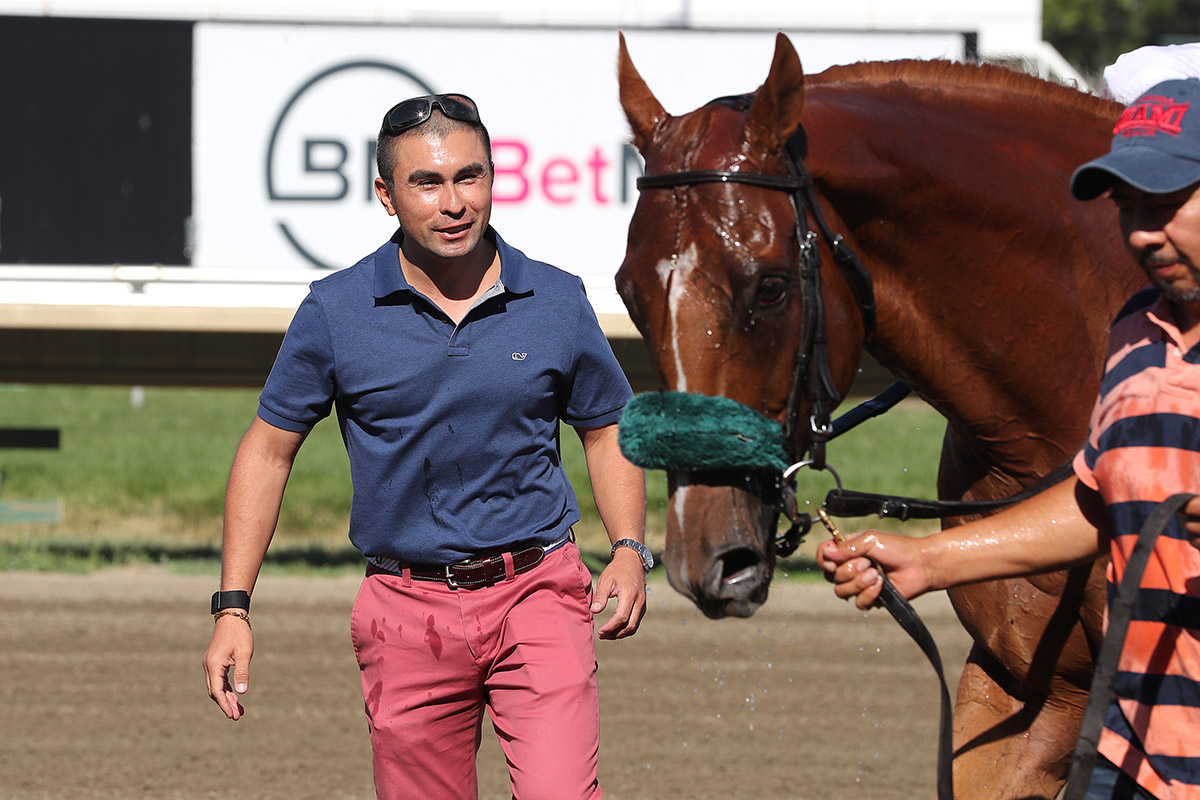 As soon as trainer Jorge Duarte, Jr. saw Monmouth Park’s turf course listed as firm for Sunday he knew he had chosen the right time and spot for Nothing Better’s stakes debut.

The 5-year-old gelding didn’t disappoint, brushing off an early speed duel with Breakthrough before going on to a comfortable two-length victory in the $100,000 Rainbow Heir Stakes, the co-feature on the 11-race card.

The Chad Brown-trained Kuramata also earned his first career stakes win with a 2¾-length victory in the $100,000 Oceanport Stakes in a race that took on a dramatically different complexion when Grade 1 winner Two Emmys was scratched.

Northing Better, a Kentucky-bred son of Munnings owned by Colts Neck Stables, had been pointing to bigger and better things, with the Rainbow Heir marking his fourth win in his past six starts. But this one came off a 58-day layoff.

“He loves the firm going and we’re having a dry summer and he had about eight weeks between races so he was fresh,” said Duarte. “With these turf sprinters there’s not a big difference between non-winners of two or three other than and these stakes races. We’re right at home when we run at Monmouth Park so I think it was a legitimate shot to take (for his first stakes try).

“He has always shown talent. But he’s a horse that needs things his way and needs firmer ground. A couple of times we’ve had some head scratchers with him on softer going. He just needs to be forward and on a firm turf. That’s his game.”

Nothing Better stuck to the flanks of speedster Breakthrough through an opening quarter in :21.93 and a half in :44.43 before putting away the 4-5 favorite in the field of seven 3 year olds and up.

Belgrano eventually close for second, one length ahead of a tiring Breakthough, with jockey Jairo Rendon having Nothing Better well in hand at the finish. It was Rendon’s third winner on the card and his third stakes win of the meet.

“Breakthrough is a tough horse, but when I got to him I knew I had him,” said Rendon. “I was more worried about Belgrano closing because that’s a good horse and he likes to run late. My horse has run well everywhere they have put him so I felt good about him trying stakes company for the first time. I felt he was ready for this.”

The win was the fifth in 15 career starts for Northing Better, who return $19.20 to win.

Kuramata was just as impressive in manhandling five rivals, with jockey Hector Diaz, Jr., making a rousing and powerful move coming out of the final turn of the mile and a sixteenth grass race for 3 year olds and up.

“They said he has been training well at Belmont,” said Luis Cabrera, who handles Brown’s division at Monmouth Park. “They thought he was ready to win a stakes race. He had a great trip. He was close, not too far back, and he always had the leaders in his sights. I think it helped him being outside. I think that’s where he prefers to be.”

A Peter Brant homebred, Kuramata returned $6.60 to win. The victory was the third in eight career starts for the 5-year-old Irish-bred son of Australia.

Mohs finished second, a half-length better than Not Blooded.

“I knew I was on the best horse. It was just a matter of working out a good trip,” said Diaz, who notched his first stakes win of the meet. “On the backside I was just where I wanted to be, stalking the pace. I knew when I asked him he was going to respond. He was lugging me a little and I didn’t want to fight him too much. I didn’t want to be in his way, either. I wanted to wait as long as I could before asking him to go and when I did he just exploded. He was waiting for that moment.”