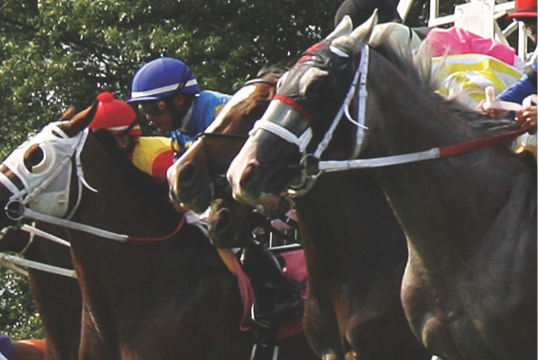 Montclair continued his resurgence at the age of 8, drawing off the way a 1-5 shot should to win the supporting feature allowance by 11¾ lengths as the all-turf Monmouth-at-Meadowlands meet came to a close Saturday night in East Rutherford.

Trained by Jason Servis and ridden by Hector Diaz, Jr., Montclair won for the fourth time in seven starts this year after being 0-for-9 a year ago. He won three times during the Monmouth Park meet that ended Sept. 9.

The son of Montjeu-Minaccia by Platini covered the mile and a sixteenth over a grass course listed as “soft” in 1:48.13.

Dark Roast, who just missed in his last start on Sept. 21 during the Monmouth-at-Meadowlands meet, engaged in a race-long duel with Like What I See before finally poking his nose in front at the wire to capture the $28,000 featured allowance.

Trained by Russell Cash and ridden by Jorge Panaijo, Dark Roast was able to deny Like What I See at the wire of the five-furlong sprint. The two ran in tandem for virtually the entire race.