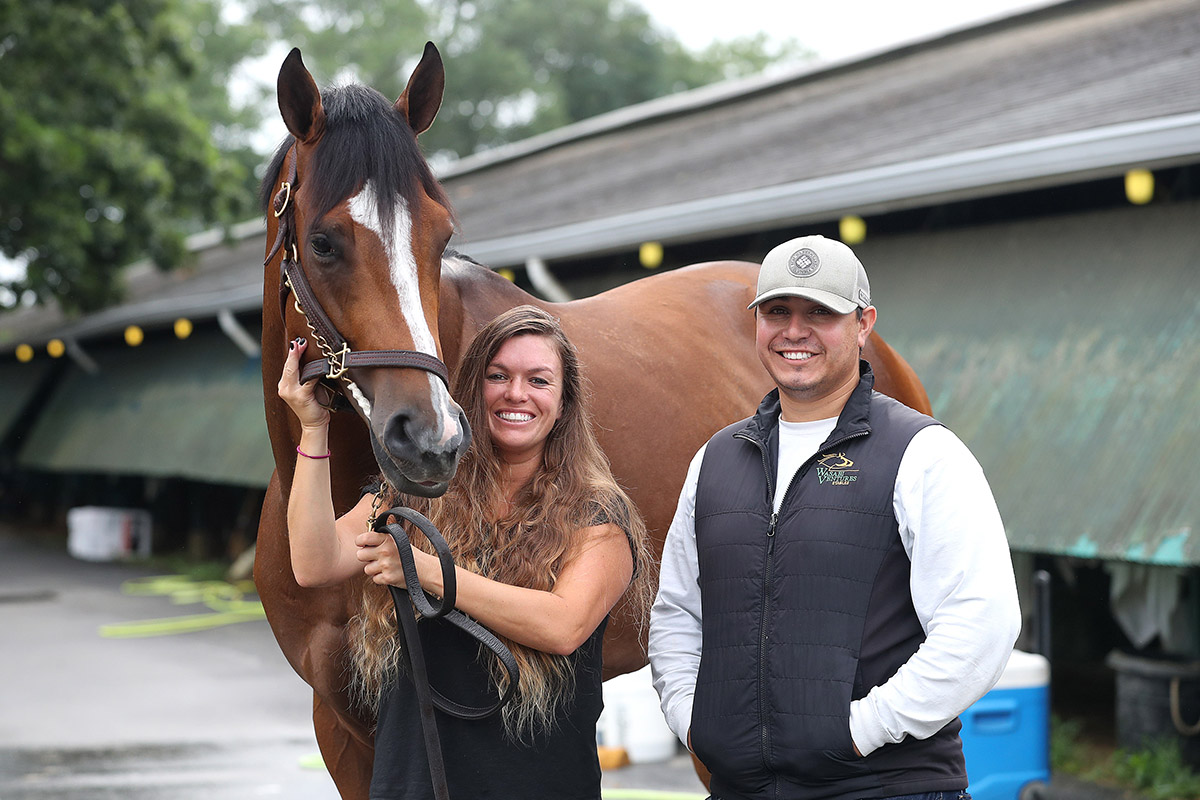 When Jesus “Jesse” Cruz picked up the phone at the end of the 2018 Delaware Park meet and dialed Wasabi Ventures Stables’ managing partner TK Keugler, he was at rock bottom – with the idea of having a horse in Saturday’s $1 million TVG.com Haskell Stakes at Monmouth Park, which he does in Benevengo, nowhere within the realm of possibility.

“I called him and was literally in tears. I told him that I started a business, my business failed, and I’m in debt, and I need to get a job,” said Cruz, who was in his first full year of conditioning Thoroughbreds and had just witnessed his only other client remove all his horses from the then 24-year-old trainer’s care.

“I’d had a lot of horses for that owner. All I was left with was two of TK’s horses in my barn. I told him, ‘I can help you find a trainer for these two horses, and I’m sorry.’ When I said all this, I was in tears.”

Keugler, a venture capitalist and the founder of the racing syndicate created in 2017, burst into laughter.

“I was taken aback by that. This was a very serious moment in my life. I was crying and he was laughing,” said Cruz. “What he does for a living is help start-up companies. I’m pretty sure he’s had that phone call at least a half-dozen times. He said, ‘Listen Jesse, our plan was to get these two horses to Oaklawn Park. Get them to Oaklawn. I’m going to fly out there and we’ll sit down. We’ll figure out how to build this stable back.’ ”

Cruz and Keugler have been together ever since.

“We’re a pretty good team,” said the now 28-year-old Cruz, who trains 15 of the 18 horses in his Monmouth Park-based outfit for Wasabi Ventures Stables. “We’ve had a lot of success together, that’s for sure.”

The stable notched its initial and only stakes score on June 19 in the $75,000 All Brandy at Laurel Park with Why Not Tonight, and that win was also the first and only in a stakes race for Cruz. Now the team is poised to elevate its success to the top level when Benevengo competes in the Grade 1 Haskell.

Benevengo, whom Keugler haltered for $25,000 out of a maiden claiming race at Tampa Bay Downs (which the colt won by 9½ lengths in his first career outing in February), was fourth in the Long Branch Stakes after enduring a nightmare trip on a sloppy Monmouth strip two starts back and then won a first level optional claiming race here one month ago.

Moreover, Taiba is trained by nine-time Haskell winner and Hall of Famer Bob Baffert, while Jack Christopher comes from the barn of Chad Brown, Cyberknife is a Brad Cox trainee, and Dale Romans conditions Howling Time. Those four horsemen have earned a collective 11 Eclipse Awards, and along with Saffie Joseph, Jr., White Abarrio’s trainer, have combined for several hundred Grade 1 victories.

“I’m not intimidated. I know it’s a big step up and I understand that, and I know there are people who are going to maybe say he doesn’t belong in the race,” said Cruz, whose only previous graded stakes appearance was in the Grade 3 Fantasy in 2019 at Oaklawn. “But my horse has run four times and won three races and he’s gotten better with every race. He beat older horses in that last race and did it impressively. I feel like I have him prepared and he’s as good as he’s going to be now.

“Whether he’s good enough, we’ll have to wait until the doors open on the gate to find that out.”

Cruz may be light on experience in saddling a horse in a top-level contest, but that doesn’t mean he’s a neophyte with this caliber of horse. The West Virginia native grew up on the backside of Charles Town racetrack as the son of assistant trainer Daisy Todd and the stepson of multiple stakes winning trainer Lewis Craig, Jr., and he was an exercise rider for family friend Ollie Figgins III before rising up to his assistant.

Cruz was on the team when Figgins trained the crackerjack Grade 1 winner Dance to Bristol, whose multiple stakes-winning career at Belmont Park and Saratoga culminated in the 2013 Breeders’ Cup Filly & Mare Sprint. His experience with her also landed him jobs galloping top class horses for Hall of Famer Bill Mott, Mike Maker, and Joe Sharp.

“After Bristol I spent some time a Saratoga, where every day is a Grade 1 experience.”

Benevengo, by Gormley out of the Medaglia d’Oro mare On High Alert, is giving Cruz and his assistant and girlfriend Grace Smith all the signals that he’s sitting on go for the Haskell. He’s fired bullets on this track in his last two works at five furlongs and he does have the home track advantage.

“The horse is doing super. We know we’re going to be a longshot. We’re stepping up from an other than to Grade 1 and that’s a pretty big task, but the horse is doing well and he’s training well,” said Cruz,” who gallops “Benny” himself. “We get to walk out of our own stall and walk over to the track he trains over every day to, hopefully, win a Grade 1 and one of the most historic races in the country.

Cruz is confident that on Saturday when he leads over “Benny,” the colt will be primed to perform at his best.

“The big thing with Benevengo is that I don’t think we’ve found the bottom with him yet,” he said. “I know he’s prepared to run in this race. We’re excited. We’ve checked all the boxes and we’ve done all the correct things.”

The same can be said for this up-and-coming trainer.

“For me, this is where I want to be. It might be a little early in my career, but I always felt I was going to get to this point at some stage. So it might as well be now.”