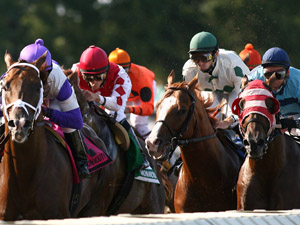 Miz Mayhem will try the grass for the first time when she joins eight other two-year-old fillies in the gate for Saturday’s $60,000 Colleen Stakes going five and a half furlongs at Monmouth Park.

The daughter of Yesbyjimminy out of the Forest Camp mare Forest Retreat graduated last time out in her third career start in a five furlong maiden special weight event at Parx on July 10 where she took the lead right away and never looked back, posting a 5 ¾ length score. Nik Juarez will be aboard for the first time in the Colleen.

“She has a lot of natural speed and this is a good spot for her,” said trainer Eddie Plesa Jr. “Paco (jockey Lopez) said that she may like the turf when he rode her last time in the win. She’s been doing well leading up to the race.”

Owned by Laurie Plesa, Miz Mayhem has hit the board in each of her three starts. In her debut at Monmouth, she took on the boys and finished third after finishing well up the rail. She returned back to take on fillies and finished second two starts back behind runaway winner Mel’s Gone Wild at Parx.

Miz Mayhem’s pedigree suggests that she should like the switch to the turf as her full sister, Flay Mignon, has banked over $116,000 with a win on the grass.

Four other starters are coming into the race breaking their maiden last time out including Anthony Margotta Jr.’s Bronx Beauty, who pulled away late for a seven-length win on the main track at Penn National, and Beaux Arts for Russell Cash, who went up to Saratoga and took a five and a half furlong sprint gate-to-wire in her first try on the grass.