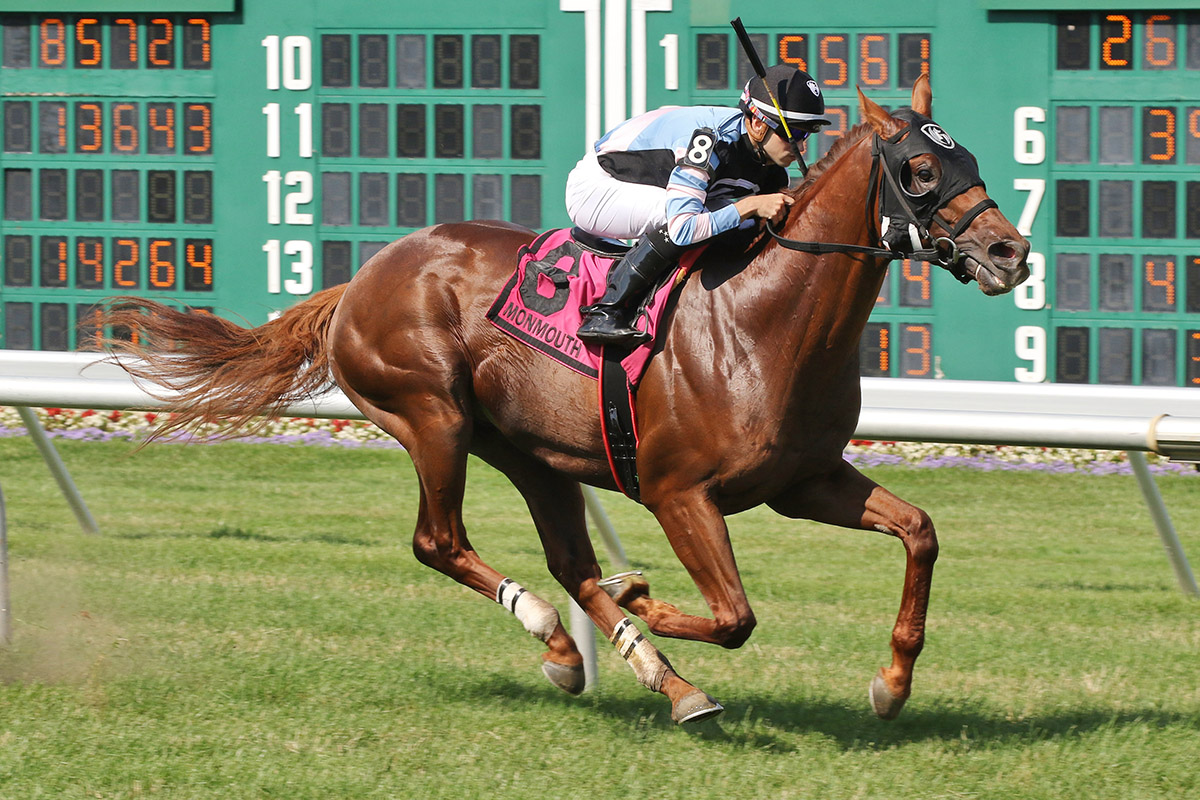 A couple of guys who know their way around the winner’s circle at Monmouth Park were back in it following the two 5½-furlong turf stakes races on Sunday.

Five-time riding champion Paco Lopez shot Missmizz through an opening along the rail to rally past the tiring speed in capturing the $75,000 Blue Sparkler Stakes, while the Jorge Navarro-trained Archidust made his long-awaited grass debut a winning one by rolling to a 2¾-length victory in the companion $75,000 My Frenchman Stakes.

“The difference today was the speed duel up front and me being able to sit back and wait until I asked her to give me something,” said Lopez. “I saw everyone coming out around the final turn so I went inside and I was able to get through. I was very lucky. I was looking to go outside but the inside was wide open. I’ll always take that. And then she gave me a good run.”

Trained by Michael Stidham, MissMizz turned the tables on 2-5 race favorite A Bit of Both, who defeated her in the Honey Bee Stakes on June 15. Saint Moon was 1¼ lengths back in second. It was another 1½ lengths to A Bit of Both in third.

“It was a great ride by Paco Lopez cutting up and taking the inside and cutting the corner when the hole opened. He kind of waited to see what the others were going to do and he was able to cut the corner,” said Stidham. “I think adding blinkers for this race helped her. They gave her a little more confidence. It certainly helped when the big favorite (A Bit of Both) had trouble on the turn. She did the same kind of erratic stuff last time but she was able to win. This time it didn’t work out so well for her.

“My horse has run so well in a few stakes and wasn’t able to win, so to get the win today was super.”

Missmizz, a 3-year-old daughter of Mizzen Mast-Silimiss by Dansili, improved to 3-1-1 from seven career starts. Six of those have been on the turf.

Archidust, ridden by Angel Suarez, also came off the pace to score handily in the My Frenchman, returning $9.80 to win.

Navarro said he has been trying for a while to get the 3-year-old son of Verrazano-Chilling Effect by Gold Fever on the grass but hasn’t been able to do so. The colt’s last start was taken off the grass – though he won anyway.

“If you go back through his workouts he was firing bullets at Palm Meadows on the grass. I kept telling the owner `this is a turf horse,’ ” he said. “We bought him last year and had very high hopes for him. I guess he wasn’t mature enough. He seemed to want to fool around too much. But he’s coming around. He’s focused in the morning, and the way he behaves in the post parade and in the gate – he is starting to get the hang of it.”

Suarez said “the race set up perfectly for us.”

“There were plenty of speed horses that probably felt they had a good shot, so at 5½ furlongs they had to send,” he said. “I was pretty much just hunting them. I really think a lot of Skole, the No. 6 horse. I had him inside of me and I was watching him the whole time. Once he made his move I made mine. My horse was much the best.”