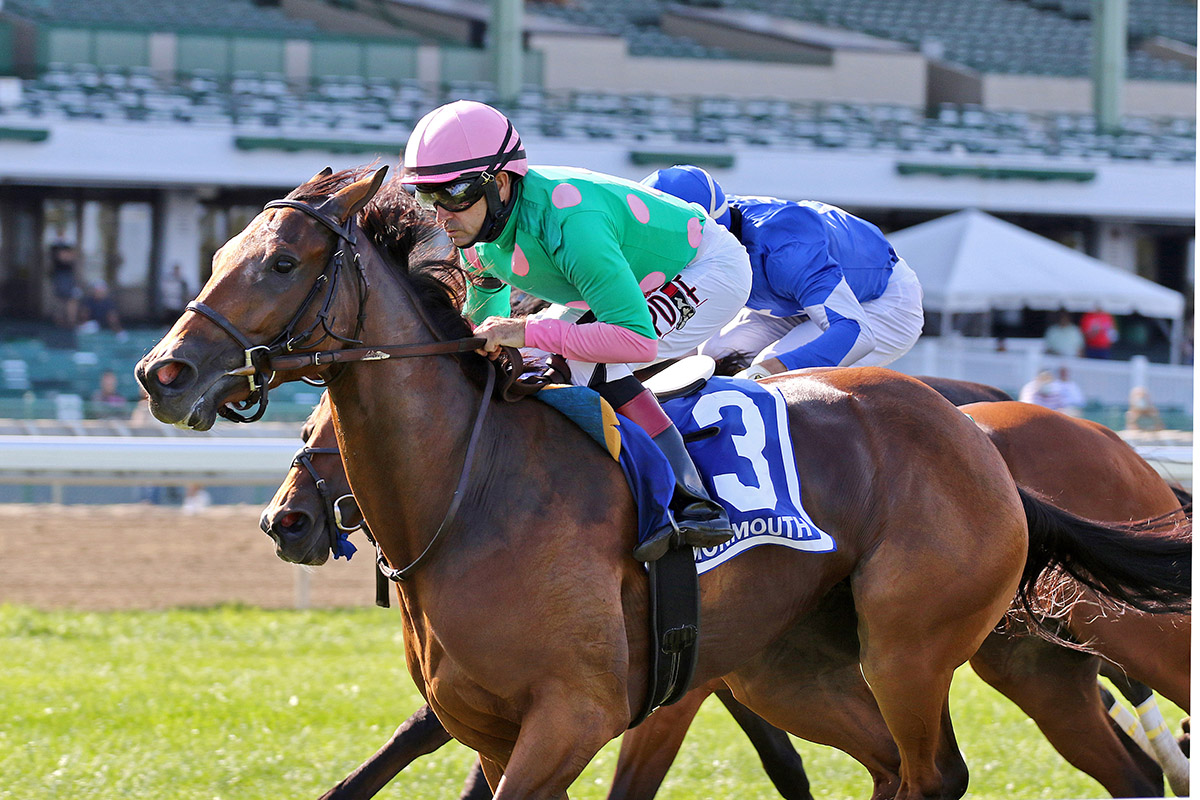 With a dozen 2-year-old fillies going a mile on the turf in Monday’s 65th Sorority Stakes at Monmouth Park, jockey Joe Bravo expected it to be a bit of an adventure. Trainer Christophe Clement anticipated the same thing – and issued a reminder to Bravo before the race indicating as much.

“Christophe had said to me ‘it’s going to be a mess out there. There’s a lot of horses for a flat-mile turf race. Try to ride a smart race and keep your eyes open,’ ” said Bravo.

Bravo wasn’t quite able to avoid the expected trouble but he was able to win nonetheless, delivering himself an early birthday present when Mischievous Dream split horses in deep stretch for a half-length victory in a wild finish in the $100,000 stakes race. That marked the third victory on the card for Monmouth Park’s 13-time riding champion, who celebrates his 49th birthday on Thursday.

“I thought she was very impressive,” said Clement. “She scared me at the eighth pole (when Bravo had to check severely). I didn’t know she was good enough to overcome that and make it to the wire first. But I guess she is.”

Back in the pack in ninth place along the rail early through fractions of :23.20 for the opening quarter and :48.37 to the half, Mischievous Dream was still in ninth entering the final turn. Bravo was able to find room along the rail in the stretch, but had to check in traffic behind Miss Wild and Social Exclusion before swinging his filly outside of both to an open seam.

From there the New York-bred daughter of Into Mischief, bred and owned by Patricia A. Generazio, shot past half the field. Invincible Gal closed for second, a half-length ahead of longshot Tic Tic Boom.

The winning time for the mile on a turf course listed as firm was 1:38.98. Mischievous Dream returned $9.80 to win.

“I had a lot of horse the entire time,” said Bravo. “At first she was hyper but she settled and relaxed. She was in the pocket. I just had to steer her out. I thought I had room in the middle of the lane to go between horses but I had to check big time.

“For a 2-year-old filly to pick herself up after trouble like that is impressive. It happened so fast. A couple of horses ducked in and out and I was able to split them. When a horse is able to pass horses in two or three jumps it’s fun.”

After winning her debut on the grass at 5½ furlongs at Saratoga on July 19, Mischievous Dream faltered a bit in her second start, finishing fourth in the Bolton Landing Stakes at Saratoga on Aug. 19, also in a 5½-furlong sprint.

Clement felt she deserved another shot a stakes race.

“We always thought she was a nice filly,” he said. “She broke her maiden impressively and we saw that she was better than she had done in her last start. She was training very well at Saratoga. That’s why we were trying to be a bit more ambitious with her and it worked out today.”