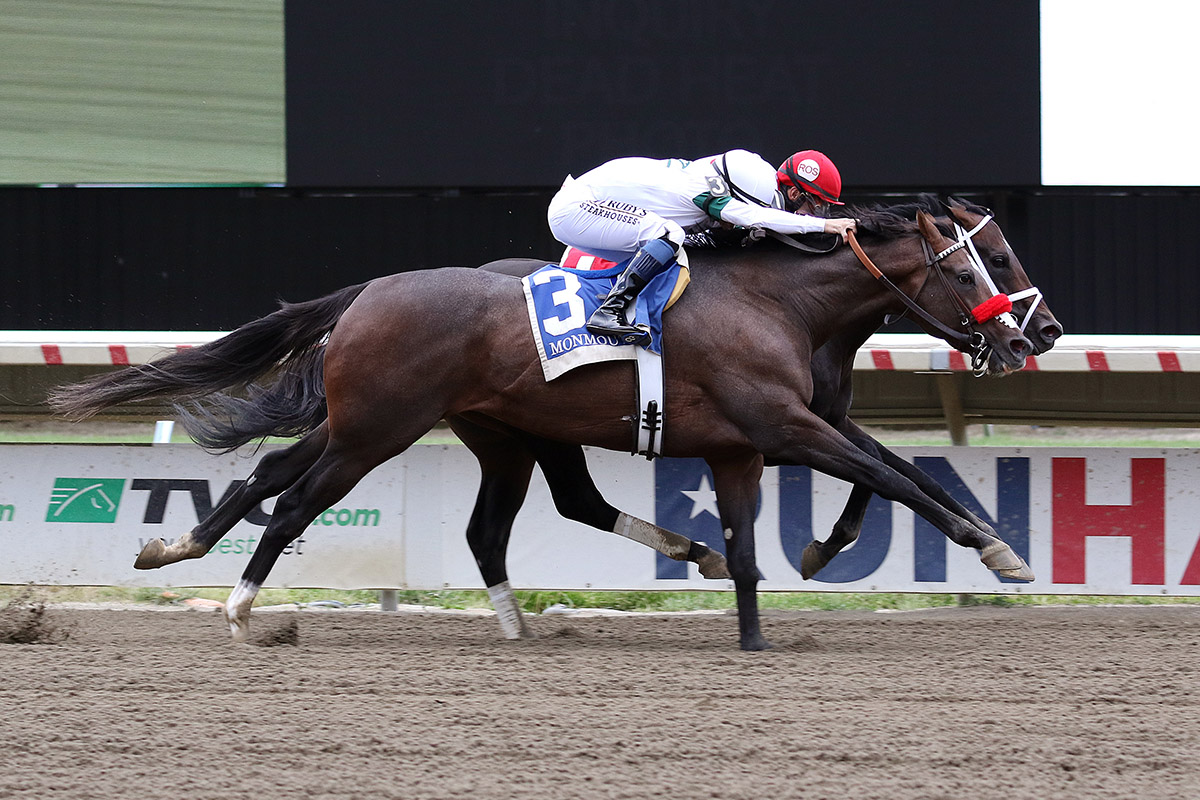 Anthony Sciametta said he received simple instructions from trainer Todd Pletcher on Saturday morning: Tell jockey John Velazquez to get to the lead with Mind Control in the Grade 3 Salvator Mile and then see if he’s good enough to fend off Hot Rod Charlie.

“That was the plan, exactly as it happened. It was perfect,” said Sciametta, who oversees Pletcher’s string at Monmouth Park.

In the end, even after Hot Rod Charlie briefly poked his head in front in mid-stretch, Mind Control prevailed by head in a stirring finish. It was another 6¼ lengths back in third to Shirl’s Speight, as the three Grade 1 winners in the field finished 1-2-3.

“This was the plan, hopefully get to the lead and get a little breather,” said Velazquez. “The other horse put up a really good fight. I thought I would make the lead. Hot Rod Charlie doesn’t have that much speed and my horse is coming from a sprint. I knew if I hustled him he would make the lead. I didn’t want to hustle him too much where I didn’t have anything left.

“We got a breather and when I got to the half-mile pole I kind of opened up again and he gave me a good run down the lane. Hot Rod Charlie actually put his head in front late but my horse was just too game.”

Hot Rod Charlie, disqualified from first to last for interference in last year’s TVG.com Haskell Stakes, chased Mind Control around the track through fractions of :23.60, :46.66 and 1:11.18 through six furlongs. It was a two-horse nose-to-nose battle the rest of the way.

“We are obviously disappointed but we’re just so proud of him getting back to the races,” said Doug O’Neill, Hot Rod Charlie’s trainer. “We’re grateful for the day and looking forward to the future.”

The race was Hot Rod Charlie’s first since finishing second in the Dubai World Cup on March 26.

“Was I pleased? No. I would not have been happy with anything but a win,” said jockey Mike Smith. “Did he run well? Yes. He didn’t run badly. Credit to the winner. He was gallant. My horse fought with him.

What his stirring effort did was overshadow strong performances by the winners of the other three stakes races, including the Brad Cox-trained Home Brew, who romped by 6¼ lengths in the TVG.com Pegasus Stakes, the local prep for the Grade 1 Haskell on July 23.

Home Brew, a son of Street Sense, is now 4-for-6 lifetime, though Blake Cox, Brad’s son, was not ready to commit the colt to the Haskell. Stablemate and Arkansas Derby winner Cyberknife is already being pointed to the Haskell.

“I’m not sure about that,” said Blake Cox. “We have to see where we are. We’ve had good luck in the Haskell (winning it last year with Mandaloun) so we’ll see.”

Home Brew’s winning time for the mile and a sixteenth was 1:43.20

The victory was the first in a stakes race for Stolen Holiday, who flashed across the wire in 1:42.30 for the mile and a sixteenth over a firm turf course.

Trainer Chad Brown’s Sacred Life was a comfortable 1¼-length winner over Safe Conduct, last year’s Queen’s Plater winner, in the Grade 3 Monmouth Stakes, a nine-furlong grass race that serves as a prep for the Grade 1 United Nations on the Haskell undercard.

“I think he will go even longer (the United Nations is at a mile and three-eighths),” said Luis Cabrera, who handles Brown’s division at Monmouth Park. “But that’s Chad’s decision if he goes in the United Nations. He has a lot of options. So he will make the decision.”