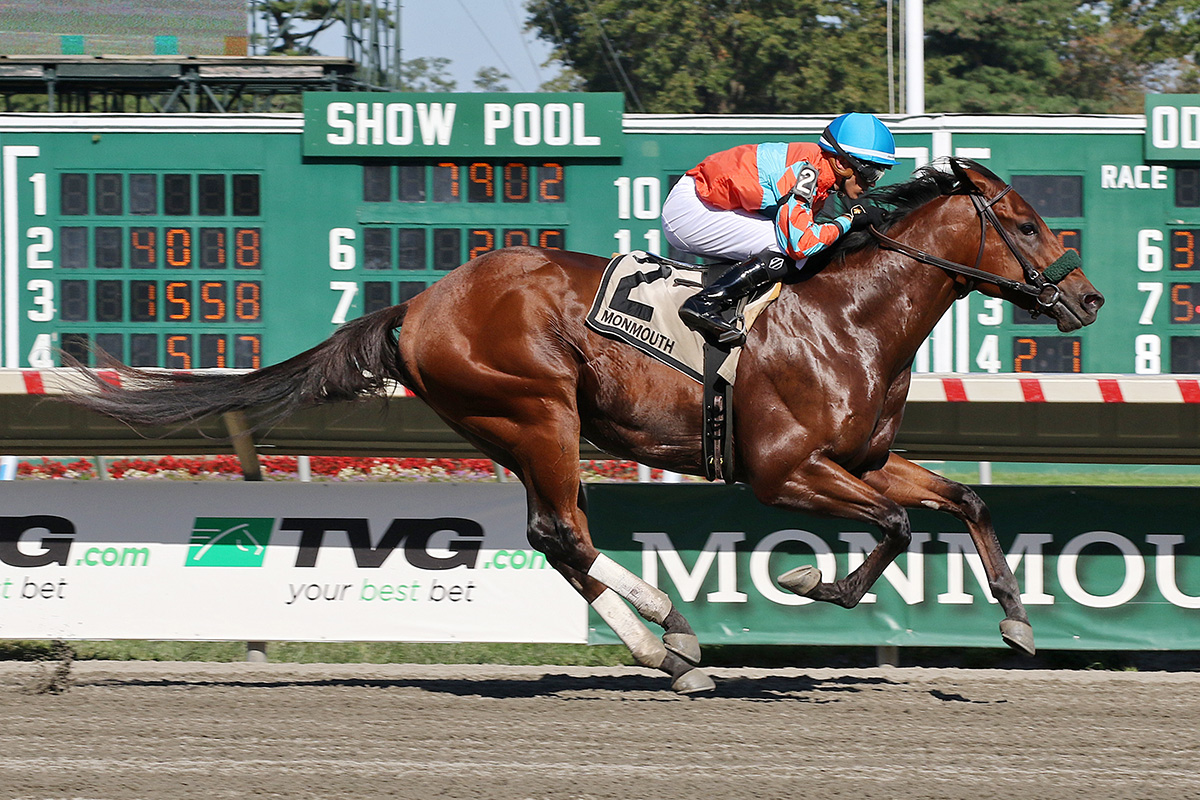 After waiting 10 weeks for Meru to make his second career start, trainer Jorge Duarte, Jr. has put the Grade 1 Champagne Stakes at Belmont Park in two weeks on his radar for his talented 2-year-old.

Meru followed up a dazzling debut on July 13 with an even more impressive victory on Saturday at Monmouth Park, cruising to a 3¼-length victory in the $75,000 Smoke Glacken Stakes.

The son of Sky Mesa-Lady Lavery by Elusive Quality covered the six furlongs in a sharp 1:08.3.

“That was eye-popping again,” said Duarte. “There are some races coming up but they may be a little soon. The Champagne is in two weeks. We’ll sit down as a team and talk about it after we see how he comes back. Hopes are high with this one.”

Jockey Jevian Toledo hustled Meru to the front early, with the only real threat coming out of the final turn, when As Seen On TV, trained by Kelly Breen, tried to draw even with Meru. That was the last anxious moment the colt had.

“He broke sharp, took the lead and then started playing around a little,” said Toledo. “When I asked him, he just took off. He’s a really nice horse. You can see him maturing. As soon as that horse (As Seen On TV) came to him out of the turn I hit him once and he kicked away.

“I think he can go longer judging by the way he ran today. I put my stick away in the middle of the stretch and just rode him. I had a lot of horse left if I needed it.”

As Seen On TV held for second, 1½ lengths ahead of the Jason Servis-trained All Eyes West.

Meru won his debut by 6¼ lengths in a Maiden Special Weight race at Monmouth on July 13, doing so at odds of 9-2. This time, the Colts Neck Stable-owned Meru was the 3-5 favorite, returning $3.20 to win.

“Our main concern, because of his behavior his first race, was how he would behave this time,” said Duarte. “He was a little temperamental his first start and we were a little concerned about that today. We gave him some time to get him mentally to where we wanted him to be before this race. He did much better today. The rest he did on his own.

“He was very impressive, the time was fast and he did it easily so hopes are high. His ears were pricked when that horse (As Seen On TV) came to him out of the turn but I didn’t think he had been asked for anything yet. He just kept going.”

Meru was picked out at the Ocala Breeders’ Sale for 2-year-olds in training in April by Colts Neck Stables farm manager Alan Goldberg at a cost of $300,000.