McGaughey-Trained Fort Washington Scores Upset At 10-1 In Sunday’s $100,000 Tale Of The Cat Stakes 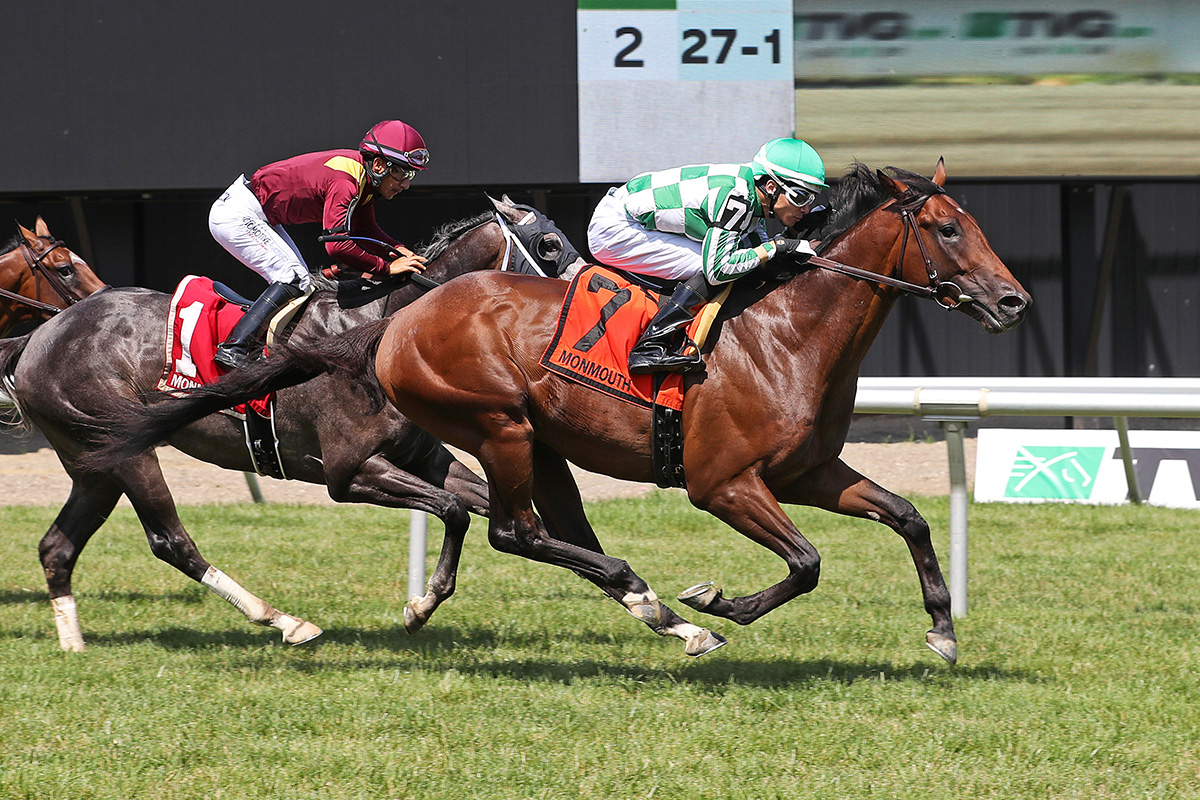 Given a firm turf course, something he did not have in his last start, and a fast pace in front of him, Fort Washington could not have asked for a better set up than what he got in Sunday’s $100,000 Tale of the Cat Stakes at Monmouth Park.

The son of War Front took full advantage of both.

Rallying from mid-pack through the opening six furlongs of the mile and a sixteenth grass feature for 3-year-olds, Fort Washington surged to a half-length victory over 7-5 second choice Quality G. It was another length back in third to 13-10 favorite Portfolio Company.

The victory was Fort Washington’s first stakes win and proved to be a major bounce-back from a dull fifth-place finish in the Grade 2 Penn Mile over a soft turf course on June 3 in his last start.

“When I sent him to Penn National last start I didn’t think the turf course would be as soft as it was,” said winning trainer Shug McGaughey. “(Jockey) Flavien Prat told me afterward that it was softer than soft. He didn’t pick his feet up at all. We know he wants a hard turf. The War Fronts like a firm turf. Of course he got it today and it turned out pretty good.”

“I was happy where I was in the back of the pack early on,” said Vargas. “They were going fast. My horse will close for you when you ask him, even against a slow pace. But they were going really fast early and I was licking my chops knowing I had plenty of horse and that he would run late.

“It worked out beautifully for us. Once he got on the right lead he took off.”

Owned by Allen Stable Inc. and Peter M. Brant, Fort Washington improved his career line to 2-1-2 from six starts, with the Penn Mile the only off-the-board finish of his career.

Vargas sat patiently as Airspeed Velocity carved out early fractions of :23.17, :46.61 and 1:09.61 through the opening six furlongs. Quality G, trained by Todd Pletcher and ridden by Paco Lopez, surged to the lead at the start of the stretch, with the Chad Brown-trained Portfolio Company looming. The latter had competed in four straight graded stakes prior to the Tale of the Cat Stakes.

But Vargas had the best finisher in Fort Washington, who surged past both in deep stretch.

“He’s a nice horse,” said McGaughey. “It has just taken him a little time to catch on. He was green. That’s probably why I haven’t run him more than I have. He’s green and needs experience.

“I was very pleased with the way he ran today. We were wide and the other two horses (Portfolio Company Quality G) got the jump on us. He looked like he got to them and then seemed like he wanted to hang, but then he spurted again. It was a very nice effort.”