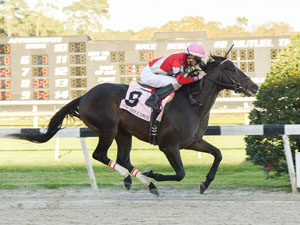 Multiple graded stakes winner McCraken continues to gear up for his run in the 50th renewal of the $1 million, Grade 1 betfair.com Haskell Invitational on Sunday, July 30.

“He’s been doing really well and I couldn’t be happier with how he’s doing,” said trainer Ian Wilkes. “We’ll have him work one more time at Churchill Downs before the race. He’ll most likely ship up to Monmouth on Wednesday.”

After an eighth place finish in the Kentucky Derby, McCraken found his way right back to the winner’s circle in his most recent start, pulling away late to take the Grade 3 Matt Winn Stakes at Churchill Downs on June 17 by two and a quarter lengths.

The colt by Ghostzapper out of the Seeking the Gold mare Ivory Empress started his career a perfect 4-for-4 including graded stakes wins as both a two- and three-year-old. He won last year’s Kentucky Jockey Club Stakes at Churchill Downs and this year’s Grade 3 Sam F. Davis at Tampa Bay Downs.

Owned by Whitham Throughbreds LLC, McCraken has worked four times in the lead up to the 50th Haskell. His latest came on July 19 when he went six furlongs over a fast Churchill Downs main track in 1:13 3/5.

McCraken will have a competitive field to deal with in search of the Haskell trophy. New Jersey-bred Irish War Cry is coming off a second place finish in the Belmont Stakes and won the Grade 2 Wood Memorial in April and Louisiana Derby winner Girvin will look to bounce back off a nose defeat in the Grade 3 Ohio Derby.

Other horses looking to make the mile and an eighth Haskell their next start include Affirmed winner and Kentucky Derby third place finisher Battle of Midway; Iowa Derby winner Hence; and, Chad Brown’s duo of undefeated Timeline and multiple grade 1 winner Practical Joke, both entering off Grade 3 victories.