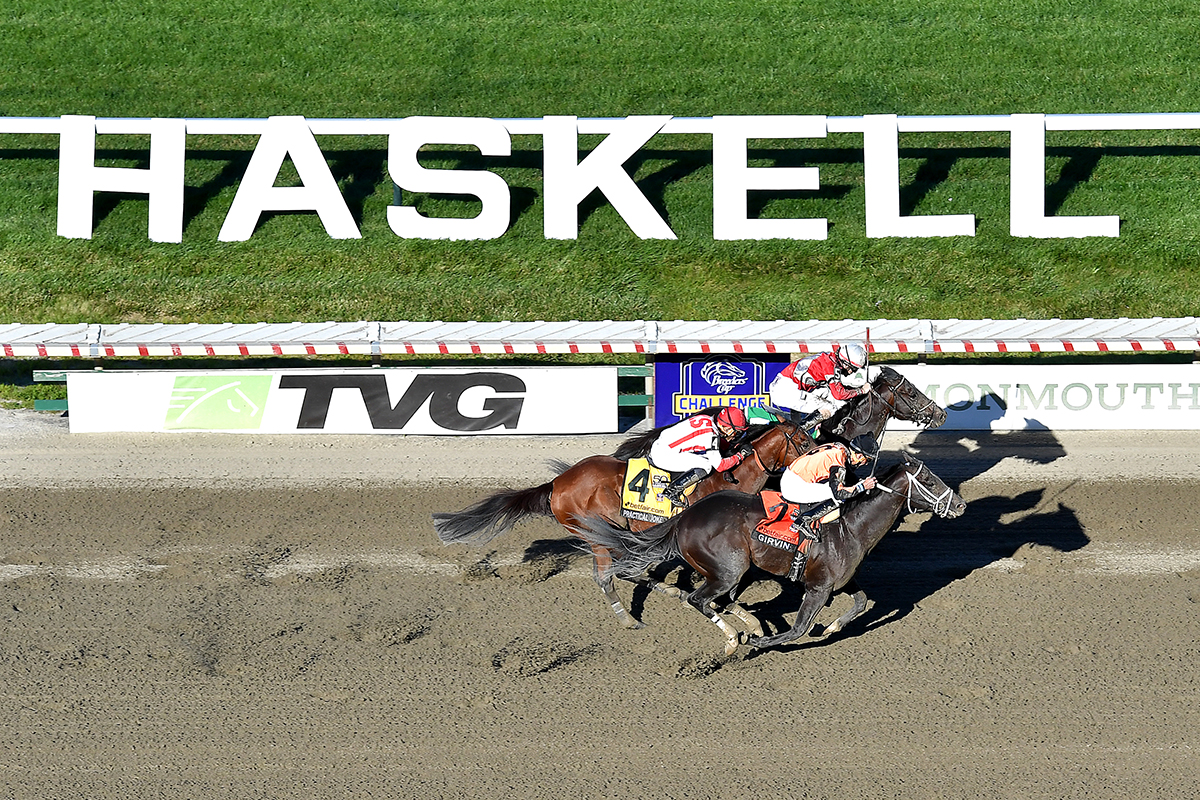 Maximum Security, the 8-5 morning line favorite in the field of seven salty sophomores, sets out to reclaim his status as the king of this year’s 3-year-old division in the 52nd edition of Saturday’s Grade 1, $1 million TVG.com Haskell Invitational at Monmouth Park.

Gary and Mary West’s homebred, who was disqualified for interference after crossing the wire first in the controversy-filled Kentucky Derby, can also earn an all-expenses-paid and guaranteed spot into the $6 million Breeders’ Cup Classic with a victory as the Haskell is a “Win and You’re In” qualifying race in the Breeders’ Cup Challenge Series.

“This race is a really important race in the 3-year-old campaign to decide the divisional champion,” said trainer Jason Servis, who stables Maximum Security in his Monmouth Park division. “If he didn’t get disqualified in the Derby, he’d be the only 3-year-old to have won two Grade 1 races so far.”

Maximum Security, the Grade 1 Florida Derby winner, faces stiff challenges from two colts whom their respective trainers feel are rapidly improving and coming into the 1 1/8 miles Haskell in peak form.

Hall of Fame trainer Bob Baffert, who has a record eight Haskell trophies, sent in Mucho Gusto from his California base and the New York-headquartered Todd Pletcher returns King for a Day to Monmouth Park for another crack at Maximum Security with hopes of dethroning the current divisional leader.

In the last start for Maximum Security and for Red Oak Stable’s homebred King for a Day, the two battled throughout the 1 1/6 miles of the Pegasus Stakes at Monmouth June 16, with King For A Day wearing down his rival late to prevail by one length after Maximum Security was compromised by stumbling out of the gate.

“The Haskell is a big step up from the Pegasus but I couldn’t be more delighted with the way my horse is coming into the race,” said Pletcher, a seven-time Eclipse Award-winning trainer, of the rematch. “We had high hopes for him from the start. We gave him time to grow up into that big frame of his and he’s a vastly improving colt. I think he’ll move forward from that last race.”

King for A Day, who is gifted with plenty of early speed, was ridden by Hall of Fame jockey John Velazquez in four of his first five starts and will be reunited with his regular pilot in the Haskell. They drew the rail in a race that is stacked with speed.

Michael Lund Petersen’s Mucho Gusto, another of the front runners, is trained by Baffert and Joe Talamo is jetting from Southern California to ride him.       Talamo, the only one to have ridden the three-time Grade 3-winning Mucho Gusto in his seven outings, hasn’t competed at Monmouth since the 2007 Breeders’ Cup.

“He’s bred to go a mile-and-an-eighth and I think he’s really improving and maturing,” Baffert said while displaying the confidence of the connections. “Maximum Security on his best day is going to be tough, and after his last race is going to be double tough. He drew the outside post and that’s going to help him.     But after Much Gusto won his last race (the Grade 3 Affirmed Stakes at Santa Anita) I felt he was ready for this. He deserves his chance to win a Grade 1.”

The Monmouth Park-based Joevia is trained by Gregg Sacco, who grew up here in the barn of his late leading trainer father and took over the stable in 1988. Brothers Michael and Jeff Fazio’s colt, who was third in the Grade 1 Belmont Stakes in his last race, will be Sacco’s first Haskell starter.

“We’re very excited. Winning the Haskell would be a dream come true,” said Sacco. “I’m very proud to representing New Jersey with Joevia. This horse will go all day and it’s going to be a very exciting race.”

Joevia is also gifted with an abundance of early speed and departs from post 2 with Jose Lezcano, the 2019 Belmont Park Spring meet leading rider, aboard.

“There is a lot of speed in this race and there are a lot of good horses and a lot of good trainers in it. But I ran Maximum Security against 19 other good horses in the (Kentucky) Derby and I’m not going to be afraid of anyone,” said Servis. “I think I have a really good post on the far outside. He can off the speed if he has to. He doesn’t have to be on the lead. I’ll leave it up to Luis (Saez, the regular rider). I feel better about my horse coming into this race than I did when going into the Pegasus. For sure.”

Parx invader Bethehem Road and Spun to Run, both of whom are stepping up into Grade 1 company for the first time, and the Dale Romans-trained Everfast, the Preakness runner-up and 7th in the Belmont in his last, complete the field.

Bethlehem Road was hand walked by trainer Dee Curry in her barn and the horse will travel by van the 1 hour and 15 minutes from Parx on Saturday.

Everfast remains on schedule to arrive from Saratoga Saturday morning.

Joevia jogged on the Monmouth Park main track and visited the paddock.

King for a Day galloped once around the training track at Saratoga and schooled in the paddock there. He will be vanned from upstate New York early Saturday morning and arrive before 9 a.m.

Mucho Gusto was sent out for a 1 3/8-mile gallop and visited the paddock in the morning.

Spun to Run jogged one mile on his home track at Parx and will make the short trip from Philadelphia Saturday morning.