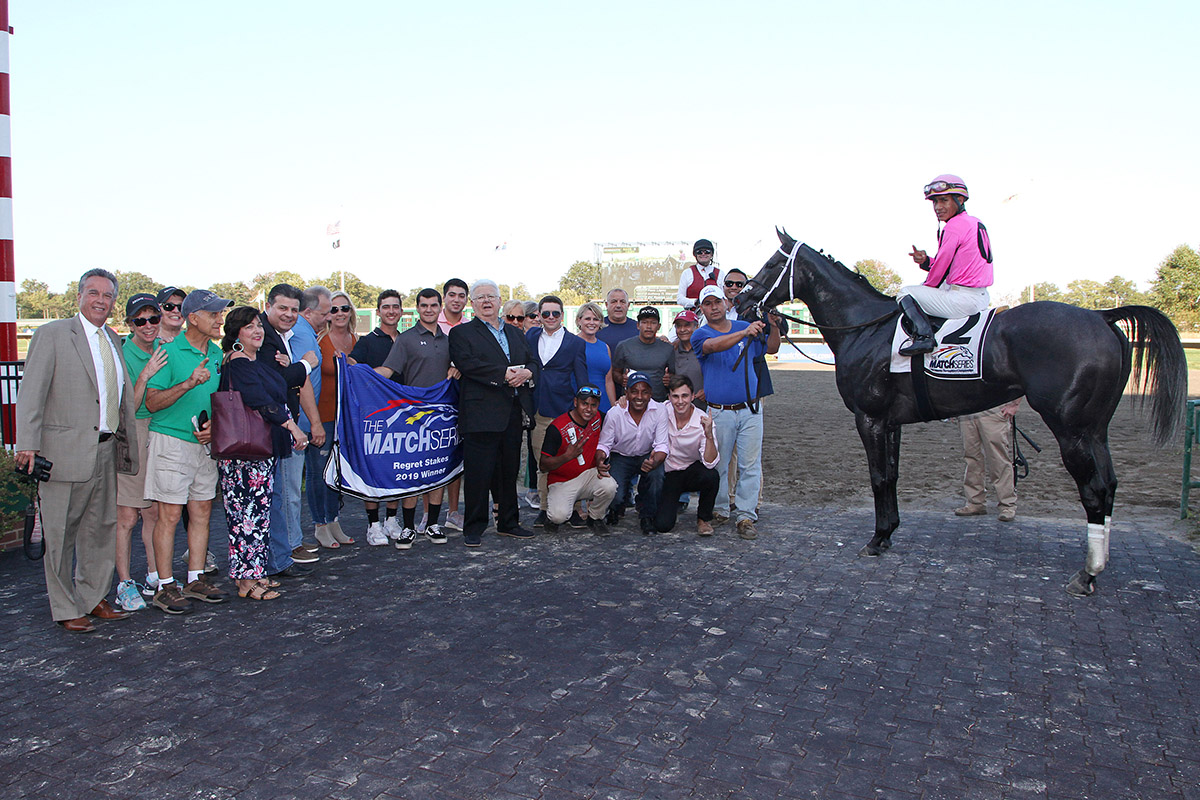 Bronx Beauty earned both a stakes victory and a MATCH championship with one gritty performance.

The 4-year-old filly survived a taxing early speed duel with chief rival Ms Locust Point, holding on for a one-length victory in Saturday’s $100,000 Regret Stakes at Monmouth Park to win both her division and the overall MATCH championship.

“She was tested and she passed again,” said winning trainer Anthony Margotta, Jr. “She’s a resilient filly. She earned this MATCH championship. I’m happy for her. She deserves it.

“It’s a tremendous accomplishment for the team I have. I’m extremely proud of them. This is the result of their teamwork – and of having a great player like Bronx Beauty.”

In addition to the $60,000 winner’s share, owner Richard Woll (2W Stables LLC) earned a $50,000 bonus for the overall championship and an additional $20,000 for Bronx Beauty winning her division (Filly and Mare Dirt Sprint). Margotta received bonuses of $25,000 for the championship and $15,000 for winning the division.

Bronx Beauty and Ms Locust Point, the only two with a shot at the overall championship, hooked up from the outset, going the opening quarter in :21.73 and reaching the half in :44.22. Under urging from jockey Paco Lopez Bronx Beauty opened daylight coming out of the turn and then held on, with Ms Locust Point second.

Time for the six furlongs was 1:10.39. It was another three-quarters of a length back to Last True Love.

Bronx Beauty paid $5.40 to win for her eighth victory in 14 career starts.

“I think have the inside post (2) really helped when the two outside horses went with me early,” said Lopez. “I wanted the lead and Ms Locust Point wanted the lead from the outside post but having the rail made the difference early. Then I just let her go.

“We started to get away around the turn and I tried to get away because I knew she might tire because of how fast we went early and it was under pressure. She did get a little tired. I had to work hard to the wire. But she’s a nice filly with a lot of class.”

The victory was the second of two for Lopez on the four stakes lineup, following a 1½-length score with the Jason Servis-trained Lasting Legacy in the $100,000 Mr. Prospector Stakes.

Lasting Legacy improved to 4-for-4 at Monmouth Park and won for the fifth time in eight career starts.

The 5-year-old son of Tapizar-Sweet Tune by Woodman rallied from mid-pack, taking advantage of fast early fractions to out-finish Whyruawesome.

“I always liked this horse,” said Servis. “I always thought he was a good horse. He seems like he’s still improving. He’s just a good horse that likes to win.”

Justaholic became a double stakes winner at the Monmouth Park meet with a gate to wire romp in the $100,000 Rainbow Heir Stakes, winning the 5½-furlong turf sprint by 4¾ lengths over Fig Jelly. Trained by Tom Clark and ridden by Jose Ferrer, Justaholic covered the distance over a firm course in 1:02.23, returning $6.20 to win.

“He made the lead and he was gone,” said Clark. “I told Jose to let him run away from the gate today because there was a lot of speed in this race and I was afraid he might get pinched back. But he just went to the front and kept going. He ran them off their feet.”

Ferrer said Justaholic, who won the Wolf Hill Stakes at Monmouth Park on July 20, “broke like a rocket.”

“I knew he was fast but today he impressed me. He came out like he was shot out of a cannon,” he said.

Andina Del Sur, trained by Tom Albertrani, captured the $100,000 Violet Stakes by a nose over Theodora B, with Barkaa another neck back in the most exciting finish of the day.

Ridden by Hector Diaz, Jr., Andina Del Sur paid $12.40 to win in winning for just the second time in her past 16 starts.