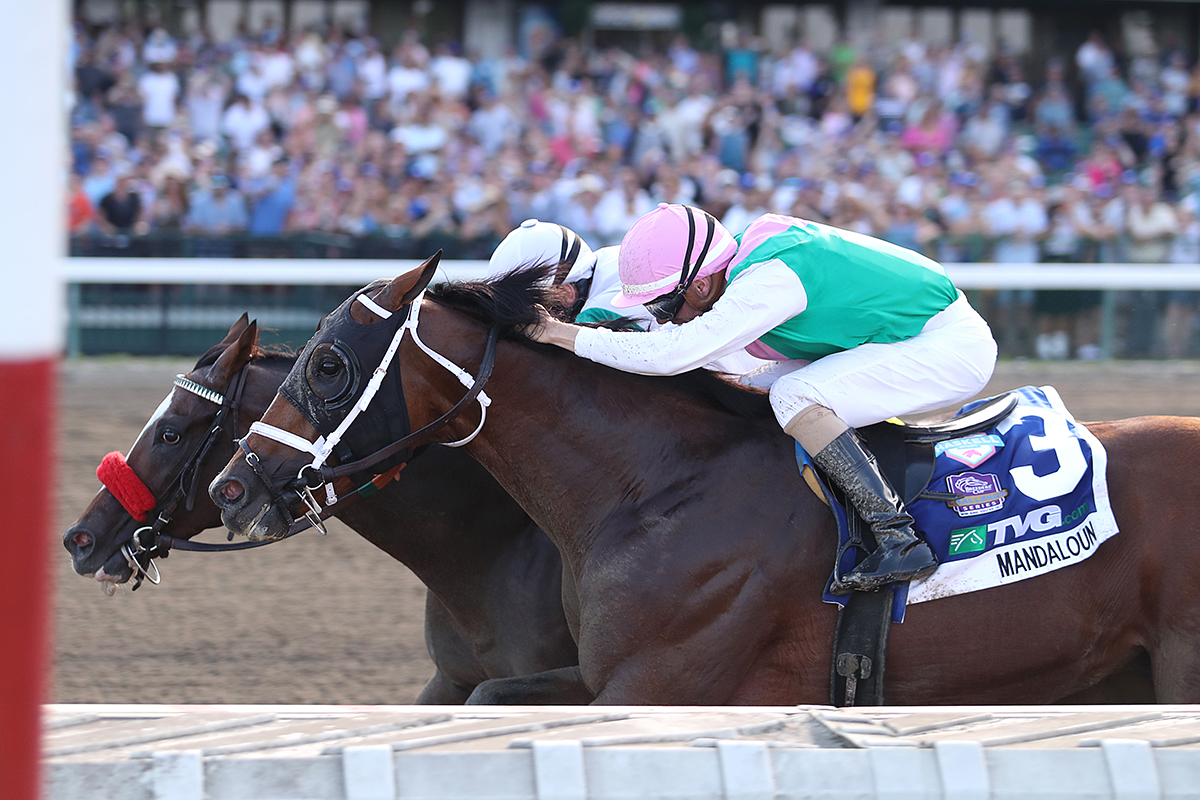 Juddmonte Farm’s homebred Mandaloun became the newest charge in the barn of Eclipse Award-winning trainer Brad Cox to attain the title of Grade 1 winner with his victory in Saturday’s $1 million TVG.com Haskell Stakes at Monmouth Park, and on Sunday morning he was wearing the mantle proudly.

“Mandaloun was really feeling good this morning,” said Blake Cox, Brad’s son and assistant trainer, who throughout the previous week oversaw the stable’s six horses sent to the Jersey Shore in advance of the blockbuster Haskell Day card. “We grazed him early and he looks good.”

The Haskell winner, Grade 1 winner Arklow, who finished sixth in the Grade 1, $500,000 United Nations Stakes in the race prior to the Haskell, and Grade 2 winner Bonny South departed the Monmouth Park backside at 5:30 a.m. on a van bound for Saratoga.

Mandaloun, who finished second by nose to Hot Rod Charlie, was elevated to first when Hot Rod Charlie was disqualified for clipping heels with Midnight Bourbon. It was the first disqualification of the Haskell winner in the race’s 54-year history.

Midnight Bourbon, who went down in mid-stretch, got back up and was unharmed and jockey Paco Lopez was fine on Sunday. Monmouth Park’s leading rider returned to win the first race on the Sunday card.

Cox was also pleased the way his runners emerged from their Saturday efforts.

“All of our horses came back from their races in good shape,” Blake Cox said. “It’s gratifying to get the Grade 1 win for Mandaloun, but that was not the way we wanted to. But we’ll take it. It’s very fortunate that everybody is okay.”

The early report on Midnight Bourbon was positive and his connections are cautiously optimistic. The Winchell Thoroughbreds’ homebred was tucked in his stall in trainer Steve Asmussen’s barn and scheduled to rejoin the trainer’s main division in Saratoga on Monday.

“They did X-rays rays on him and jogged him this morning,” said David Fiske, the stable’s longtime general manager. “The x-rays were no different than what they showed before the race and he seems to be jogging better today than he was yesterday.

“Everybody’s got their fingers crossed that nothing pops up in the next few days or so. We’ll watch him and wait and see. It’s a little early to make any kind of plans for him.”

Hot Rod Charlie walked the shedrow Sunday morning while sporting a bandage on his right hind leg. Other than a few nicks and scrapes from the incident he was reported to be okay and would jet back to trainer Doug O’Neill’s Southern California stable on a Tuesday flight.

Runner-up Following Sea came out of the race in fine order and was due to van back to Saratoga on Monday, and the locally based Antigravity and Pickin’ Time each got the thumbs up from their conditioners.

Basso, also based at Monmouth Park, bled in the race, which was contested without the ant-bleeder medication Lasix as the Haskell is a Breeders’ Cup Classic qualifier under the “Win and You’re In” program and therefore run under the medication-free conditions of the Breeders’ Cup Challenge Series.

“He bled in the race,” said trainer Gregg Sacco. “He was in a good spot and he was making a nice move down the backside and he didn’t have a final punch. Granted, it was a super-tough race, but he bled, unfortunately.

“We will address that and treat him differently. Maybe he needs Lasix to run on. It’s as simple as that. He came back to the barn and cooled out well. He ate up this morning. I’m happy this morning.”

Tribhuvan, who raced in France until the conclusion of his 2019 career and was subsequently sent to Brown, became a first-time Grade 1 winner when he dominated the 1 3/8th miles United Nations Stakes gate-to-wire on the Monmouth turf course.

“He did great. We’re really proud of him. He ran a great race,” said Brown, who saw Tribhuvan have to settle for second to stablemate Domestic Spending last time out in the Grade 1 Manhattan Stakes. “He continues to improve and prove that he can go around three turns at the mile-and-three-eighths distance, and Flavien (Prat) rode him really well.”

Brown is known for his success with turf horses. Saturday’s United Nations win was his fourth overall in the race.

“The UN has a great tradition, It’s one of the races that we point to every year if we have the right horses. It’s really been an honor to win four of them,” he said.

In the Grade 3 WinStar Matchmakers Stakes on the grass, Brown’s Great Island finished just one-half length in front of stablemate Kalifornia Queen to win her first stakes race in her first time stretching out to 1 1/8 miles.

“I’m really proud of both of their efforts and they’re headed back to Belmont today,” said Brown, who had Tribhuvan vanned to Saratoga. “It’s always nice to participate in Monmouth’s big days and do well. They always put on a nice card of racing and we are grateful to come away with a couple of nice wins.”