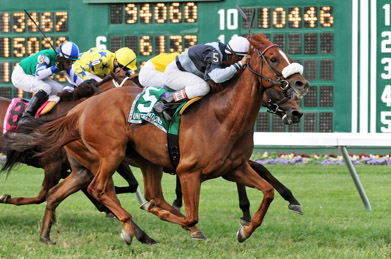 OCEANPORT, N.J. – Champion Main Sequence will join Monmouth Park’s Hall of Champions when the racetrack kicks off its 72nd season of racing this Saturday, May 13.

A Flaxman Holdings, Ltd. homebred, Main Sequence began his career in Europe where he won his first four starts before finishing second in the 2012 Epsom Derby.After a winless 2013, the son of Aldebaran from the Pivotal mare Ikat was gelded and sent to the United States.

“He’s certainly a fitting member of our Hall of Champions,” said Robert Kulina, president of Darby Development LLC, operators of Monmouth Park.“His last-to-first win in the 2014 United Nations was one of the best runs that race has ever seen.We’re honored to place him alongside the best of the best ever to compete at the Jersey Shore.”