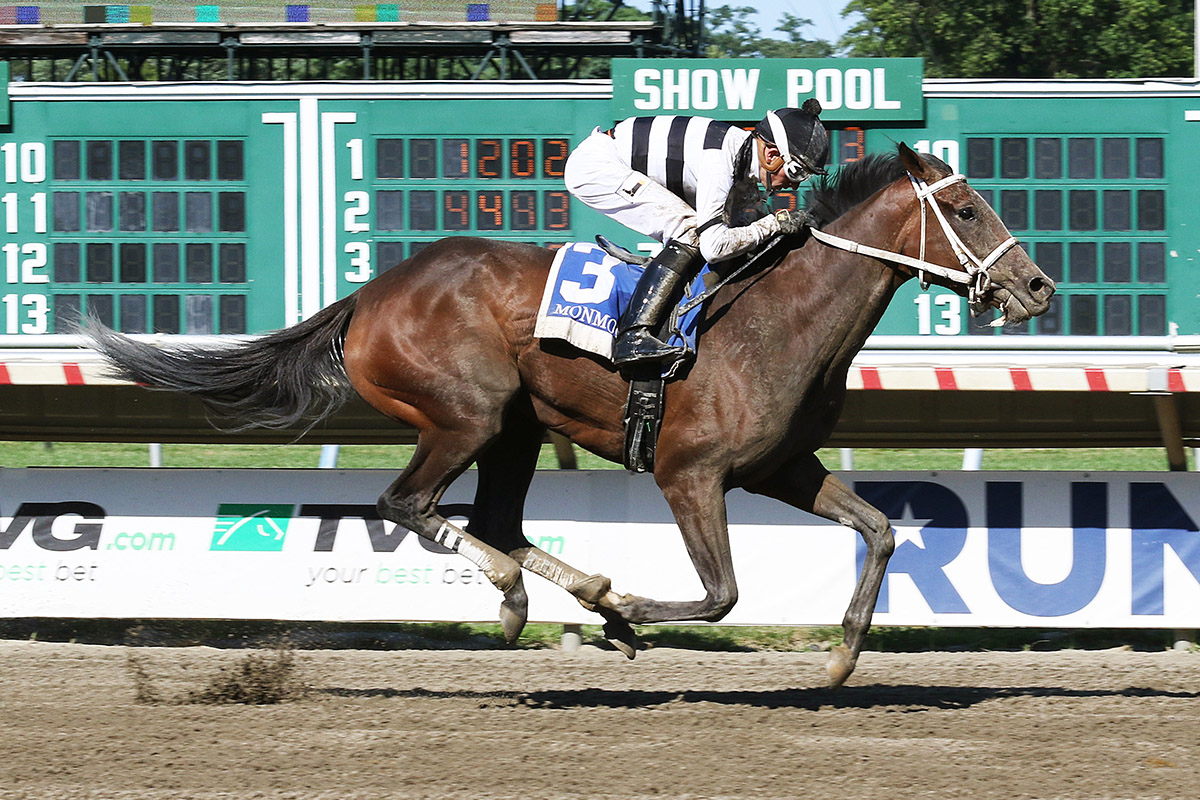 Trainer John Servis went into Saturday’s Grade 3 Monmouth Oaks at Monmouth Park thinking that Midnight Obsession was further ahead at this stage of her development than stablemate Leader of the Band.

He found himself re-assessing that belief right after the race.

Leader of the Band staged a prolonged rally from mid-pack, eventually collaring 6-5 favorite Edie Meeny Mino Mo at the sixteenth pole, and went on to a two-length victory in the 97th edition of the $250,000 Monmouth Oaks.

“She ran great,” said Servis. “Unfortunately, my other horse (Midnight Obsession) came out a little bit and bothered her at the start, so I thought she would be a little bit closer. But it might have worked out for the best.

Servis, who also had both fillies go in the Grade 3 Delaware Oaks on July 3, saw a reversal of their performances this time. Midnight Obsession was second that race, with Leader of the Band, who broke flat-footed, rallying to be third.

“She has a little bit of a late kick but she really has the steady, Energizer Ready bunny in her. She just keeps coming,” said Servis.

In notching her first stakes victory, the daughter of Bandbox improved her career line to 3-2-2 from seven starts. She is owned by SMD Limited.

“The last time she ran in the Delaware Oaks she didn’t get off great,” said Pennington. “Today she made a great run late. When the pace was up ahead of me, she felt pretty good and I was sitting there and every time I nudged her she was giving me something so I felt pretty comfortable coming out of the three-eighths turn.

“She clipped heels a little bit after the break and I was a little further back than I wanted to be but she is such a nice horse, she kept chugging and she got the job done.”

Edie Meeny Mino Mo, an impressive winner of her only two starts, both sprints, looked to be clear after taking command coming out of the final turn when Midnight Obsession could not go with her. That’s when Leader of the Band launched her rally.

“She kind of missed the break,” said trainer Miguel Vera. “She was a little impatient in the gate and broke a little awkward. I think that cost her the race. Victor Espinoza said she wasn’t very aggressive in the first turn and everybody else slowed down so he took her to the lead. I think she will be okay with two turns with a clean break.”

In the supporting feature, the $100,000 Tale of the Cat Stakes for 3-year-olds at a mile and a sixteenth on the turf, the Chad Brown-trained Founder rallied from last in the seven-horse field on the way to a comfortable 1¼-length victory over It Can Be Done.

The 6-5 favorite, Founder notched his second career victory. It was one of four winners on the card for leading rider Paco Lopez. Hot Blooded rallied for third.