Kulina Calls it a Career at Monmouth Park 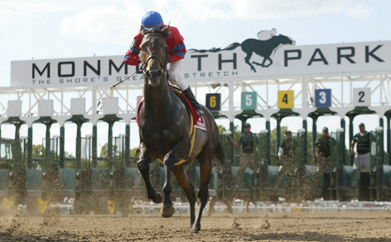 “It has been my honor and privilege to be associated with Monmouth Park for nearly my entire life,” said Kulina, who started in 1972 as the claims clerk.  “From the beginning, this has always been my home away from home and my extended family.  I thank everyone for their hard work and support over the years and appreciate their good wishes.

“The reality is that it’s time to embark on the next chapter of my life and enjoy it with my wife Sue and my children and grandchildren.  With the management team I’ve assembled, I know I leave Monmouth Park in good hands for many more generations to enjoy.”

The son of a trainer, Bob Kulina grew up in the racing industry.  A graduate of West Virginia’s University of Charleston in 1971, Kulina worked as a racing official at various racetracks before being named Monmouth Park Racing Secretary in 1977.

During his tenure in the Monmouth Park racing office, Kulina developed the popular overnight stakes program, which has become a standard in the industry.  After 15 years as racing secretary, Kulina was named General Manager/Thoroughbred Racing at Monmouth in 1991.  Soon thereafter he added that title at the Meadowlands and oversaw Thoroughbred operations for the New Jersey Sports & Exposition Authority racetracks until 2012.  During that time he was instrumental in developing the Haskell Invitational into a race of national prominence and the next stop for 3-year-olds following the Triple Crown.

Upon the signing of a lease of Monmouth Park to the New Jersey Thoroughbred Horsemen’s Association in 2012, Kulina was named President of Darby Development, LLC, the management company for the racetrack.

“For the past six years, and decades before that, Bob has embodied everything that is good about Monmouth Park and horse racing in New Jersey,” said Dennis Drazin, Chairman and CEO of Darby.“Through his stewardship, Monmouth Park and our racing brand have enjoyed exponential growth and continue to be a premier destination for horsemen and racing fans.I thank him for his years of service to this industry and his dedication to ensure its success for many years to come.”