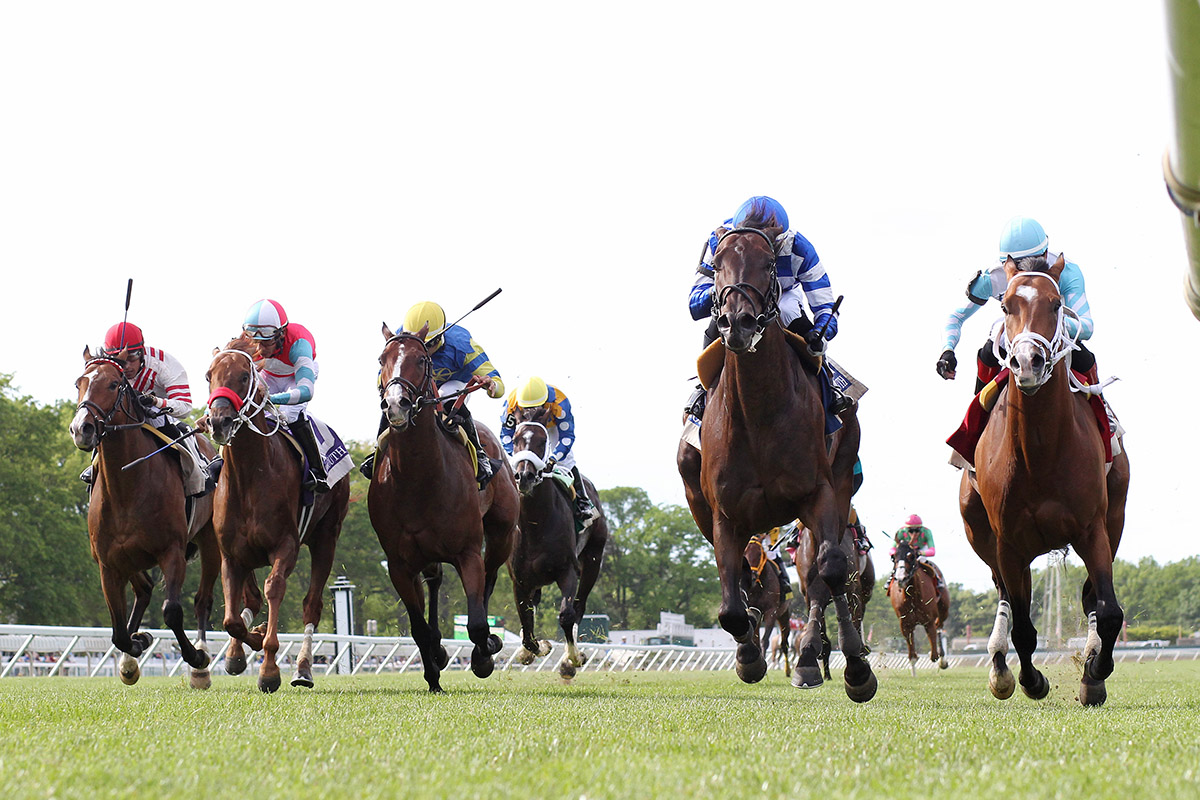 For a deep closer like Kentucky Ghost, it was the perfect set-up: The fast early fractions in Saturday’s $106,000 Cliff Hanger Stakes at Monmouth Park provided all the assistance he needed for a breakthrough performance.

With full momentum while swinging five-wide coming out of the final turn, Kentucky Ghost collared pacesetter Winfromwithin at the sixteenth pole before surging to a half-length victory, his first against stakes competition.

The winning time for the mile and a sixteenth over a turf course rated “good” was 1:40.44.

“We got the early pace he needs,” said trainer Vickie Oliver. “He’s a late-closing horse. It was a good set up for him. He can close in on anything. He has such a big turn of foot and such a big heart. But whenever you get those fast early fractions you always feel a little better about him closing into them.

“The horse that was in front (Winfromwithin) dug in gamely, but our horse is a pretty game horse.”

Jockey Jorge A. Vargas, Jr. said he felt better about his chances after seeing the opening six furlongs go in 1:09.97 with the mile reach in 1:34.42.

Kentucky Ghost, a gelded 5-year-old son of Ghostzapper, was last after a half in the nine-horse field and was still sixth after three quarters of a mile.

“I knew they were going fast early. My horse was running and we were pretty far behind the leaders,” said Vargas. “But he was throwing in good licks. So I felt good about him, even though he was far back. So when it was fast I was happy. I was a little worried about the turf, which I thought was a little quick. I didn’t want to give myself that much to do but that’s the way it worked out.

“When he got running he really got running. I was trying to keep him away from horses because he can come in a little bit. So I wanted to give myself a little room so I didn’t take his momentum away. It worked out good.”

Kentucky Ghost, owned b B B N Racing LLC, returned $14.20 to win. Winfromwithin finished 1¼ lengths ahead of Analyze It in third after dueling for the opening six furlongs with Mid Day Image.

Kentucky Ghost had three second-place finishes in stakes company last year, but had yet to win a stakes race. In his seasonal debut on May 7 in the Grade 1 Turf Classic at Churchill Downs he was pulled up and vanned off.

“He’s had a few misses in stakes races but he’s always consistent and he is always right there except for the last race, which I don’t really have any answers for that other than he just didn’t take to the turf course that day,” said Oliver. “Hopefully moving forward we can get a couple of more stakes wins over the summer.”