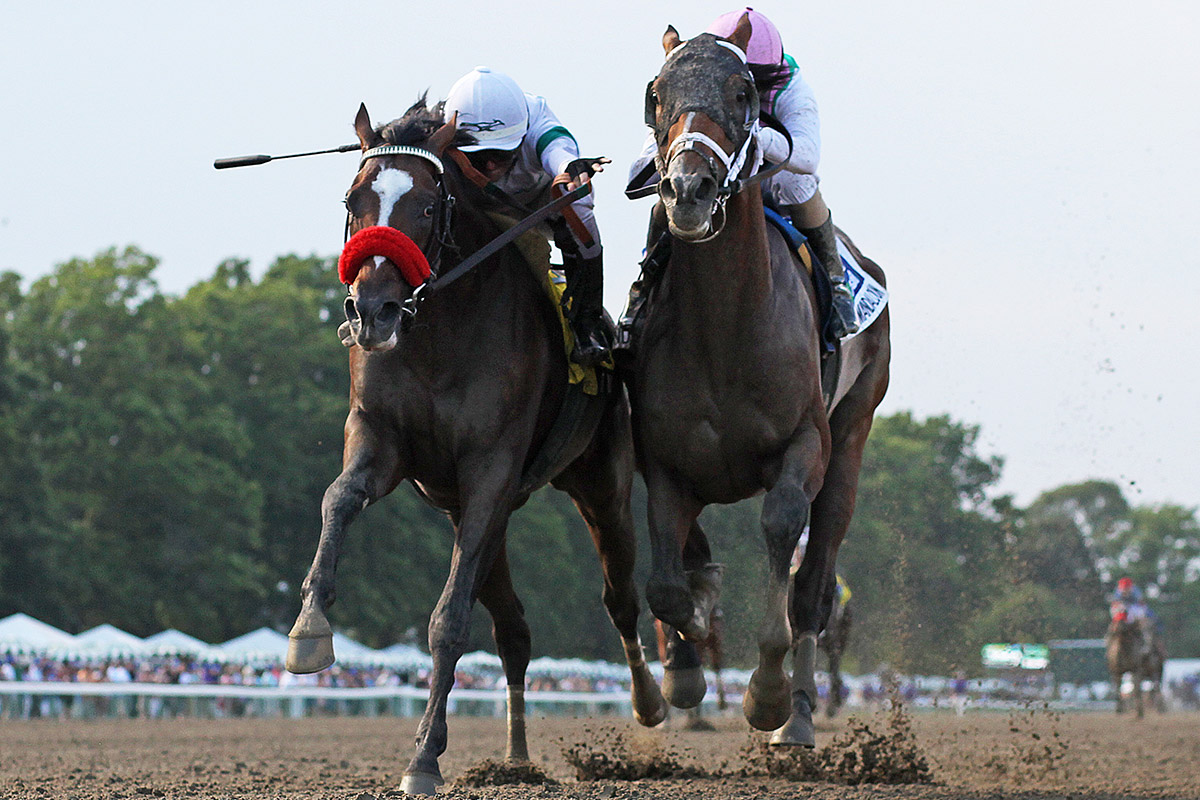 Juddmonte Farms’ Mandaloun came from off the pace to earn his first Grade 1 victory in the 54th running of the $1 million TVG.com Haskell Stakes at Monmouth Park on Saturday as a result of the first winner’s disqualification in race history, and with the triumph gave his owner/breeder, trainer, and jockey their first scores in the prestigious race for 3-year-olds.

With the victory, Mandaloun also earned an all-expenses-paid berth in the starting gate for the $6 million Breeders’ Cup Classic on Nov. 6 at Del Mar through the Breeders’ Cup “Win and You’re In” Challenge Series.

Mandaloun, who is conditioned by Eclipse Award-winning trainer Brad Cox and was ridden by Florent Geroux, actually finished a nose behind Hot Rod Charlie at the wire of the 1 1/8 miles test.

But Hot Rod Charlie, ridden by Flavien Prat, was disqualified and placed last for apparently clipping heels with Midnight Bourbon past the eighth pole and causing that horse to go down on the track while unseating jockey Paco Lopez.

Due to the incident, Spendthrift Farm’s homebred Following Sea was 18¼ lengths back in third (and placed second) with 58-1 longshot Antigravity another 4½ lengths behind. He was elevated from fourth to third.

“Honestly, I didn’t know what happened until I came back and looked at the TV. It is not the best way to win but Mandaloun ran a winning race and deserves this.”

The Todd Pletcher-trained Following Sea, breaking from the rail under Joel Rosario, took the early lead through honest fractions of 23.82, 47.32, and 1:10.64 for six furlongs before giving way while racing for the first time in stakes company and trying two turns and the distance for the first time.

Hot Rod Charlie and Mandaloun, the Kentucky Derby runner-up, hit the wire just a nose apart in the final time of 1:47.38.

“We got a really good trip. I thought it was a lot like our Kentucky Derby trip,” said Cox. “He was saving ground. Florent did a good job of getting on the outside of Following Sea. Turning for home I thought we had a big shot at winning the race. I thought we ran a winning race.

Cox, who won the Belmont Stakes in June with Godolphin homebred Essential Quality, said that he was so focused on Mandaloun that he never saw Midnight Bourbon go down. He added that once he saw the replay of the race he was certain that Hot Rod Charlie’s number would be taken down and Mandaloun would be declared the official winner.

Mandaloun, who prepared for the Haskell with a win at the TVG.com Pegasus Stakes at Monmouth in his last starts, is a Kentucky-bred son of Into Mischief out of the Empire Maker mare Brooch. With the $600,000 winner’s share of the purse, he improved his earnings to $1,651,252 and has a record of 5-1-1 in eight starts.

“Ultimately I think Brad followed a very good plan. We got one over the track (in the TVG.com Pegasus Stakes),” said Garrett O’Rourke, the general manager of the American division of Juddmonte Farms. “He trained up here as well and we’re sitting here today so we have to consider it a success.

“I know he’s a genuine Grade 1 horse. There’s no fluke to the way the horse runs. It’s good that the horse justified how good a runner he is. He’s a beautifully bred horse and he was extremely well prepared. We’re extremely proud. It was an unusual race but we still feel like he ran a winning race and it tastes the same.”

Doug O’Neill, the trainer of Hot Rod Charlie, was unavailable for comment. Prat said, “I’m really proud of his effort. He just clipped heels. That’s it.”

Lopez, who was taken off the track on a stretcher, was treated on-site by Dr. Angelo Chinnici, the Monmouth Park medical director.

“Paco has a soft tissue injury to his right knee and ankle. He was alert and oriented,” said Dr. Chinnici. “He was not taken to the hospital. He took off (the rest of the card) as a precaution. He said he was very disappointed because he thought he had a ton of horse.”

Midnight Bourbon suffered no serious injuries from the fall.