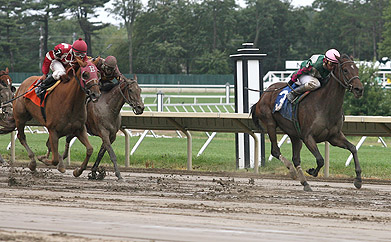 Julia Chubouli looks to remain perfect in 2017 when she breaks from the outside in a field of six for Sunday’s $41,000 allowance optional claiming feature going six furlongs on the Monmouth Park main track.

“She has been doing good off of her last race,” said trainer J. Willard Thompson. “She’s run a couple of good races since coming back and she continues to try hard every time. I think the outside post should help with her speed.”

The 5-year-old mare by Hey Chub has been a perfect 2-for-2 since coming back off a 8-month layoff, scoring both in gate-to-wire fashion against allowance and optional claiming foes at Monmouth Park. Eddie Castro was aboard for her latest win and will get the call again on Sunday.

Owned by Quiet Winter Farm, the daughter of the Tapit mare White Eye Julia I. has worked twice since her latest victory. Her most recent breeze came on July 1 when she went four furlongs in :51 2/5 over a fast main track.

Monmouth’s popular Dawn Patrol program, which gives fans a look into racing life behind the scenes, continues all summer long running through Aug. 20

This year, Dawn Patrol will be held on Saturdays and Sundays, starting at 8 a.m. The free morning tour consists of a tram ride through the Monmouth Park stable area during workout hours, a close-up look at the starting gate, a tour of the jockeys’ room, which is usually off-limits to the public, and a running commentary on racetrack life by hostess Laurie Lane. Learn about the life of Thoroughbred race horses including training programs and equipment, feed programs and a variety of other topics.

Get your spot now for another great Monmouth Park tradition. Reservations are required and can be made by call 732-571-5542. For more information, visit monmouthpark.com.